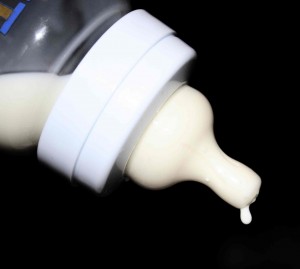 Exclusive breastfeeding is regarded by WHO and by most, if not all, paediatric academies, as the ideal for newborns and infants up to 6 months old. It is also recommended that breastfeeding begins as soon as possible after birth. That is why the small pilot study by Flaherman et al is both interesting and controversial.

Researchers randomised exclusively breastfed term newborns that had had 5%-10% weight loss before 36 hours, and were 24-48 hours old at time of recruitment, into two groups: The intervention group was syringe fed 10 ml of an extensively hydrolysed formula after each breastfeeding until mature milk production began; the control group was exclusively breastfed. Both groups were similar. Allocation was concealed. Blinding of parents and researchers was not possible, but the person who assessed outcomes was not aware of the assigned intervention.

There are a few caveats, though. First, why use an extensively hydrolysed formula in the intervention group? Is it because the authors and/or the patients feel it is ‘less allergenic’ so it would be less likely to harm? Also, one of the authors has been employed by formula companies before. Should we be suspicious? Second, it is surprising that less infants from the control group, who began as exclusively breastfed, were exclusively breastfed at 3 months. Why? Maybe mums who feel they have failed their babies give up more. Researchers and trainers could not be blinded, so maybe there was a difference in how they treated or motivated each group. Lastly, the results, while statistically significant, are imprecise. Confidence intervals are very wide.

So, should be change practice and encourage mothers to give a little bit of formula while mature milk is produced? No. Maybe it won’t hurt, but this paper certainly doesn’t show that it helps. The findings of this study need to be replicated in a larger trial, preferably with independent funding and no conflicts of interest.