Australia’s status over the last decade however has changed from ‘leader’ to ‘laggard’. Apart from strong tax policies that have resulted in significant increases in the prices of tobacco products, the last ten years have been uneventful for tobacco control. That changed on 30th November 2022, with the Minister for Health announcing a package of reforms that will help take Australia back up to international best practice is several crucial areas.

Australia’s current patchwork of eight different tobacco-related laws, regulations and court-endorsed and voluntary agreements is badly outdated and full of gaps and loopholes. The Australian Government’s “Reignite the Fight Against Tobacco Addiction” reforms seek to consolidate these into one piece of comprehensive national tobacco control legislation, updating and extending several major areas of regulation in the process.

First, the Government will update and improve current graphic health warnings on tobacco products. In line with findings from several international research projects, (e.g., Figure 1) it is also looking to make individual cigarettes dissuasive with unattractive colours or, as set out in proposed regulations for upgraded pictorial health warnings in Canada, to mandate warnings on individual cigarette sticks. 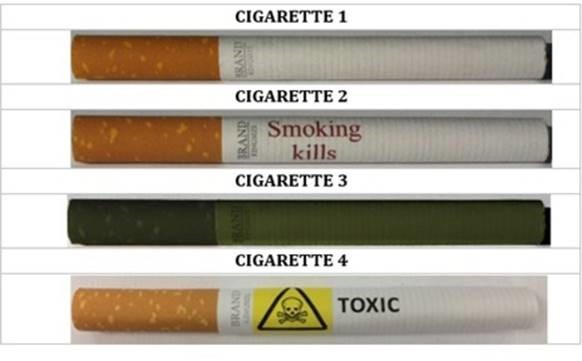 The reforms will also require Canadian-style inserts in packs and pouches to provide consumers with more cessation focussed information.

Proving that there is no such thing as ‘set and forget’ in tobacco control, the tobacco industry in Australia, left pretty much to get on with ‘business as usual’ has been engaging in aggressive price-related promotion, and has developed product gimmicks such as recessed filters and flavoured ‘crush-balls’ that distract from the essential harmfulness of its products. The Government’s reforms announced at the end of November 2022 will

In addition, reforms will require greater transparency from tobacco companies about sales volumes and pricing, product ingredients and emissions along with their advertising, promotion and sponsorship activities.

The Australian Government has also announced its intention to tackle current widespread illegal supply of e-cigarettes throughout the country. Australia’s Therapeutic Goods Administration is undertaking a consultation  about measures to more effectively achieve the aim of protecting children from harms associated with nicotine while ensuring medical care for smokers wishing to use nicotine vaping products for smoking cessation.

Finally tobacco control advocates are also looking forward to the long-delayed release of an updated Australian National Tobacco Strategy which it is hoped will complement these legislative reforms with a commitment to funding for integrated mass media campaigns and  complementary campaigns targeted at high prevalence populations, with specific elements and local campaigns developed for and by Aboriginal and Torres Strait Islander peoples, continued investment in multi-faceted and culturally safe approaches to reduce tobacco use among Aboriginal and Torres Strait Islander peoples, support for community mobilisation and community-based interventions, and enhanced smoking cessation services, especially to ensure equity of accessibility for priority populations across the whole nation.

For more information about tobacco control in Australia see Tobacco in Australia: Facts and Issues.

Michelle Scollo is a Senior Adviser in Tobacco Control at the  Cancer Council Victoria, Australia and Senior editor of Tobacco in Australia: Facts and Issues. Sarah Durkin is Principal Research Fellow at the Centre for Behavioural Research in Cancer, Behavioural Science Division, Cancer Council Victoria and an Associate Professor (Honorary) at the School of Psychological Sciences at The University of Melbourne, Australia.

Both authors are employed by a non-profit organisation that conducts public health interventions and advocacy aimed at reducing the harms of tobacco in the community, especially those pertaining to cancer.