The passage of the 2009 United States Family Smoking Prevention and Tobacco Control Act (TCA) spurred new research in tobacco regulatory science. Led by the Food and Drug Administration’s (FDA) Center for Tobacco Products Office of Science, the National Institutes of Health (NIH) and FDA partnered to establish a comprehensive research agenda in tobacco regulatory science. Within the first 10 years of the signing of the TCA, over $1.2 billion of funds supported hundreds of research projects. Concomitantly, new tobacco research publications –appeared, including the journal Tobacco Regulatory Science which debuted in April 2015. The journal provided a new publication outlet for tobacco regulatory science research and boasted a large team of respected Senior Associate Editors, lending the journal instant credibility.

A quick Googling of the company raised immediate red flags for me. I resigned from the editorial team – and asked to be removed from the journal’s masthead and website – which was immediately done – only to have my name reappear on the website soon thereafter. Multiple emails to Reddy asking for this correction went unanswered. I soon learned I was not alone in my frustration when many others received and forwarded with alarm a mind-boggling email with an attached memo from Elbert Glover to JCFCorp. Indeed, the memo to JCFCorp notes:

“…..editors and reviewers are expressing concern regarding the lack of available information pertaining to JCFCorp as a publisher. Authors have received no response regarding their requests for information concerning where their manuscripts are in the queue and anticipated publication dates.”

Moreover, the memo implies that JCFCorp no longer owns the Journal, having likely re-sold it within 1-2 months of purchasing it. There is a lack of clarity in the JCFCorp memo as to who now owns the journal, but the email suggested it was sold to “Intellectual Edge Consultancy” in Malaysia, and the new TRS editor is “Dr. Anil Kumar” with an email address that is not functional and spoofs the AIP society (see Figure) (note- the “AIP Society or American Institute of Physics– uses the email domain @aip.org). 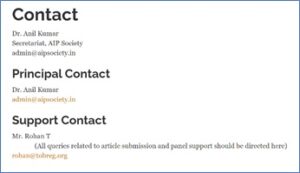 The memo also highlights very strange activity on behalf of the new journal owners. Manuscript Manager (MM) had contacted JCFCorp requesting payment for manuscript credits. Apparently a manuscript credit is a charge for handling a manuscript submission. It appears that during a 2-month period 190 manuscripts were processed, representing an astronomical increase in volume – on par with what TRS previously would process over a 2-3 year period. During this time of unprecedented increased volume and new journal ownership, the one-time fee charged to authors of accepted papers doubled from $750 in early 2021 to $1500.

Manuscript Manager also noted that many of the manuscripts were not tobacco related. Perhaps most important for authors is that in the absence of payment for this high volume of manuscripts, MM apparently “..placed a temporary freeze on the account” and “the platform is currently inaccessible rendering the review process for those pending manuscripts suspended.” It is unknown how many legitimate manuscripts are stuck in limbo. Those that have submitted manuscripts but have not yet heard about their fate would be wise to withdraw the manuscript (if possible) and submit them elsewhere. But what of the manuscripts that were accepted but have yet to be published?

At this point in time, the journal Tobacco Regulatory Science fails to meet basic ethical principles as a publisher.1,2 First, information about the journal’s current ownership is unknown and is not detailed on the journal’s website. Moreover, the publisher is using misleading organizational names (AIP) creating confusion about the nature of the journal’s owner. Second, the editorial board has not been contacted by the new owner and seems to have no governing role in the journal. Third, there is no viable mechanism to contact the journal owner.

Given the explosion of fake and predatory journals and publishers, one would think more due diligence would have been exercised before selling a journal that was born out of a real need for a publication outlet for tobacco regulatory science. Indeed, some basic web research might have raised concerns about the legitimacy of JCFCorp – the signs suggest it is not a real company with real employees. Equally disturbing is the fact that the journal succeeded for years based on the collegial support of the TRS community and these very individuals are being exploited today – indeed, despite repeated requests from several Senior Associate Editors to have their names removed from the website, their names are still being used to promote what is now likely a predatory journal. Tobacco Regulatory Science might not be the last tobacco focused journal to “go bad,” so as a community we need to be more mindful and diligent about monitoring the journals to which we submit, identifying publishers of questionable/predatory journals, sharing information and guiding junior scholars and trainees who may be those most vulnerable to exploitation. Let’s be better prepared for the next dumpster fire.

Cristine Delnevo, PhD, is from Rutgers Center for Tobacco Studies, New Jersey, USA. The author does not have any conflict of interest to report.