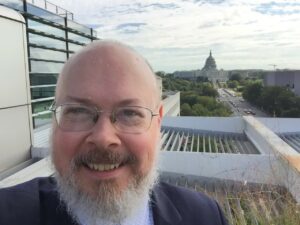 On 14 February 2021, tobacco control sadly lost one of its greatest advocates, Simon McNabb. Simon had a long and distinguished career in public health in the U.S. and will be greatly missed by all whose lives he touched. On 26 February, Simon’s family and friends were joined by his colleagues, including both the current and former U.S. Surgeon General, in celebration of his life and his life’s work.

The following was written by Simon’s friends and family.

In 2003, Simon joined the Policy, Planning and Coordination Unit in CDC’s Office on Smoking and Health (OSH), where he worked until his retirement in 2020. As a senior advisor, Simon served as an expert in the development and implementation of evidence-based guidelines and recommendations to prevent and control tobacco use. He excelled at providing technical and subject matter expertise to federal partners, national organisations, and others in the areas of policy, systems, and environmental interventions.

Simon’s contributions to tobacco prevention and control were evidenced both nationally and internationally. In his 17 years at OSH, he helped to develop and release six Surgeon General reports, including the landmark 50th anniversary report in 2014, as well as reports on secondhand smoke and youth tobacco use. In 2010, during a detail to the U.S. Department of Health and Human Services’s (HHS) Assistant Secretary of Health’s Office, Simon was one of the authors of Ending the Tobacco Epidemic, A Tobacco Control Strategic Action Plan for the HHS. In addition, early in his career, he participated in the development of the US government’s secondhand smoke position during negotiations for the World Health Organization Framework Convention on Tobacco Control.

A master communicator and convenor, Simon worked closely with the Office of the Surgeon General to help coordinate HHS’ tobacco control activities. For about a decade, he led HHS’ monthly tobacco control steering committee meetings and cessation workgroup meetings. In addition, for more than eight years, Simon served as the designated federal official for the Interagency Committee on Smoking and Health (ICSH), an HHS Federal Advisory Committee. During the 2020 ICSH meeting, former US Surgeon General Jerome Adams expressed appreciation for not only Simon’s deep commitment to our mission, but also his leadership, deft management, abiding friendship, and unfailing good humour.

A graduate of St. John’s College, Simon began his public health career in environmental health in the late 1980s. This included working in Nashville, Tennessee at the state level on radon risk reduction and as indoor environments program manager at the International City/County Managers Association (ICMA). In 1997, he joined the Indoor Environments Division, Environmental Protection Agency (EPA), where he worked as an indoor air quality expert. He helped design the agency’s Smoke-Free Homes campaign and led EPA’s Smoke-Free Home Pledge effort, launching it with then EPA Administrator Christine Todd Whitman.

In all of his professional endeavours, Simon was humble, kind, and quick-witted. Throughout his CDC career, Simon was known as a go-to person. He could easily jump in to lead projects—big or small—at a moment’s notice. Whether someone needed talking points for an HHS senior official, a moderator or a presenter for a high-profile event, or just advice, Simon could be counted on to deliver and deliver well. He was the ultimate pinch hitter [baseball term for an emergency substitute].

Simon touched his colleagues’ lives professionally and personally and made their lives richer, brighter, and simply better. His calmness consistently put others at ease, and his smile would light up a room. Simon’s cultural references would add levity and connection to even the most consequential situations. Whether speaking at a large conference or in a small meeting, Simon always knew what to say and made everyone feel that he was speaking directly to them.

Simon enjoyed many hobbies. His excitement for Shakespeare, the New England Patriots, the Washington Nationals, and Star Trek Deep Space Nine was contagious. His true passion, however, was his family, including his beloved wife, Rachel, and his four children, Eva, Finlay (Finn), Beatrice (Bea) and Archie.