On World No Tobacco Day in the Philippines capital Manila, commuters were stunned to find grisly crime scenes in various locations in the metro. The cause of death: tobacco. 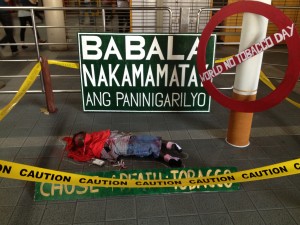 The tobacco ‘crime scenes’ are actually art installations vividly illustrating what tobacco companies don’t want people to see: smoking kills. The installations are part of a campaign called Cause of Death: Tobacco, spearheaded by HealthJustice Philippines in partnership with the Department of Health (DOH), the Metro Manila Development Authority (MMDA), Southeast Asia Tobacco Control Alliance (SEATCA), and the New Vois Association of the Philippines (NVAP), among others.

“When you promote smoking, you promote death, it’s as simple as that,” said Irene Reyes, Managing Director at HealthJustice. “Tobacco advertising, promotion and sponsorship (TAPS) activities deceive and hide the truth from the public, making it seem as if smoking is glamorous and cool when the truth is that it kills one out of every 2 smokers. A comprehensive ban on TAPS will help in reducing deaths that would be caused by smoking.”

“Tobacco really is the world’s biggest serial killer. For this simple reason alone it needs no further promotion,” said Diana Trivino, Project Manager at HealthJustice. “Tobacco is a major cause of the world’s top killer diseases including stroke, lung cancer and cardiovascular diseases. It is responsible for almost 1 in 10 adult deaths worldwide. It is irresponsible to continue to allow promotion of tobacco products.” 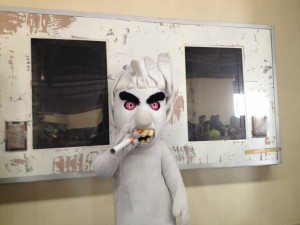 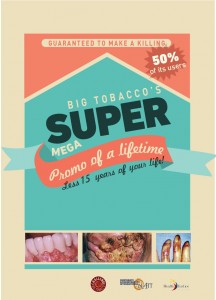