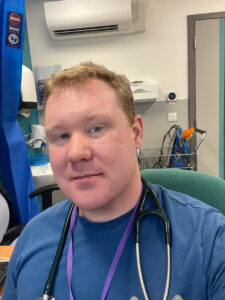 93 year old celebrates third resurrection.
Doris (93), recently celebrated with all 24 of her next of kin after a week of not eating and drinking. ‘They keep saying I’m going to die, but really it’s just like having a very good nap’ said Golden Gran Doris.
‘We think she’s doing it for the attention’ said her daughter, Daisy (75). ‘We’ve had 3 Christmases this year alone’, she added.

Record breaking Palliative MDT.
‘3 days in, we knew it would be a long one’, stated Prof. Softly-Softly. ‘However, we only paused once to bake some fresh carrot cake…most importantly we made a plan to re-unite Doris with her beloved goldfish “Mr Fluffy” and learned the origin of everyone with an interesting name’.

Sadly we understand that 2 patients and a much loved family dog died before the MDT was completed.

Academic publishes piece.
Our roving reporter caught up with Professor Softly-Softly (55) to discuss his seminal article on the numbers behind the numbers. ‘Tell me Prof- how is this going to benefit patients moving forward?’
‘Well, you see it’s really incredible how we took the numbers that were there before and we made some new ones then wrote them down in tables and lastly, I’m particularly pleased with how this worked out- graphs.’ responded the Professor.

‘Fascinating, Professor-so what can we expect to see in terms of real world benefits?’
The Professor responded: ‘I’m unsure if you understand the point of publication, aren’t numbers enough for you?’

Unfortunately the Professor had to go to lead an MDT, cutting short our interview but we look forward to further exciting discussions in the future.

To palliate or not to palliate.
Guest writer Dr. John Fishing has sent the following harrowing story.
It was a genuinely nice morning on the ward when my consultant saw the patient.

The patient that he’d decided to palliate.

We could all tell that this was an unwell man and the patient looked poorly too.
Unfortunately the patient’s son stated that palliation wasn’t on the cards-all therapies must be engaged to save his fathers life from terminal cancer, heart failure, kidney disease and on-going haemorrhage. This was a man just 107 years young, a fledging in life’s journey, stated his son-too young to die.
We all knew we had no choice but to continue the IV Taz-o-fruse-dexamic acid. Surely a Christmas miracle was due?
But then! A wind of change swept in to the ward as the patient’s daughter boldly stated: ‘You wouldn’t treat a dog like this’. We agreed but we were at a loss as to how veterinarian affairs might be worked in to the plan. With two such oppositional views what could we do?

When our heads were at their lowest, our eyes closed in silent despair…in walked the palliative care CNS. Truly we were saved.
‘The patient’s died’ she said.
And we were released from our torment of indecision.

Thought of the week: dark humour shines a light in the shadows.

Also by this author:

Welcome to the department of rebrands.

Welcome back to the department of rebrands

How To Tell if Your Patient is Dying.