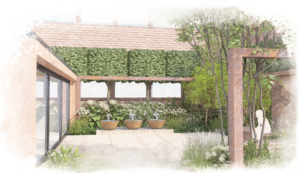 One of the initial concept drawings of the eternal garden at ASPH.

Opening a new ward is much like having an unexpected child enter your life. It is both a source of joy and stress every day. The following article is a reflection of our learning over the past year of running a new palliative care ward.

In September 2021 Ashford and St Peter’s hospital (ASPH), opened up its new front-end assessment wing. The opening of a large number of clinical assessment beds meant that the previous medical assessment unit could be closed. We had known of the closure and the new unit for months. It’s hard to hide a new two-story wing attached to a busy district general hospital. However, despite the impending closure and new ward opening, a decision as to whether the beds would rest, their duty done, or be called once more unto the breach, was not made until a few days before the planned ward closure. Three days, to be specific.

ASPH had a proud and youthful history of palliative care managed wards during the last two year’s COVID outbreaks and so the idea and support for a palliative care ward arrived with support throughout the hospital leadership team. How this was to be delivered was down to the consultant and nurse leads for the ward and the original concept was for a 12 bedded ward- 2 bays and 4 side rooms. The bays were originally 5 bedded bays, but we decided from day 1 that we should prioritise the environment as much as we could in a hospital setting and therefore made the bays 4 bedded.

Victims of our own success it soon became clear that the initial role of cohorting palliative care patients in a single space was one that lent itself well to those with more general palliative care needs in the terminal phase of life. Soon the ward expanded to 20 beds as we took over more of the bays previously closed or used as ‘discharge’ spaces. In each we kept to the same philosophy of ensuring the environment was appropriate for the need of the patients.

During our efforts and various ward led initiatives including creation of special ‘willow signs’ to indicate more poorly/recently deceased patients the hospital wellbeing team created an eternal garden attached to the ward. The eternal garden, funded through voluntary donations to the hospital, includes a large cabin and beautiful garden with seating and small water features, (pic above). It is used for delicate discussions, bereavement counselling and more.

We have learned a lot over the last year. Yet despite all that we recognise as benefits of the new ward we continue to wrestle with our identity. We have been clear from the beginning that we are not a hospice in the hospital and yet it is hard to avoid the perception of other clinicians that this is what we are providing. On the one hand this is a compliment regarding the successes we’ve had in creating an oasis of palliative care within the hospital. On the other hand, it can lead to unreasonable expectations on the behalf of patients or staff as we don’t have the remit, flexibility, resources or goals of a hospice. We wish to avoid de-skilling other wards in the hospital and yet although we continue to reach in across the hospital the issue of de-skilling persists as a concern.

Since its inception we have looked after approximately 700 people. The number of written complaints about the ward is 0 after one year, a statistic that speaks for itself when compared to averages of end of life complaints in hospitals.

We are grateful for the opportunity we have had but feel that there is yet more to learn and improve upon as we look ahead to another year.

Also by this author:

Is equality over equity becoming a problem for the NHS?

Why can’t we engage more people in future care planning?

How To Tell if Your Patient is Dying.