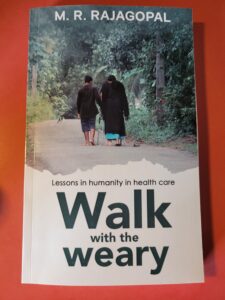 Walk with the Weary by Dr M.R. Rajagopal is an account of how one physician moved from a career in anesthesiology to a lifetime mission in palliative medicine, how he replaced a single focus on pain relief with a comprehensive humanitarian philosophy that is all about how to help patients die well. Dr Rajagopal is now a revered figure throughout the subcontinent, widely known as the “father of palliative care” in India. His personal story, as told in Walk with the Weary, is filled with simple but fundamental truths; it is also a captivating, inspirational read. This review is supplemented by observations made by Dr Rajagopal during a talk at Weill Cornell Medicine in New York on May 24, 2022.

Dr Rajagopal’s vision has been the creation of an influential role for the larger community that surrounds each individual dying patient. This concept emerged from memories of his first encounter with death as a child. In the small farming village in Kerala, India, that had been his childhood home, he witnessed how the death of an aged uncle was mourned by his extended family and friends, all of whom gathered for at least a week, before and after the traditional Hindu ritual of the funeral pyre. Meanwhile, cooking and other household chores were taken over by the relatives so that the immediate family, especially women, would have the freedom to grieve properly. Gradually the intensity of mourning eased, and people drifted off to resume their own lives. In this way the author as a young boy was able to take in the process in which death was accepted as natural and inevitable. He was also able to absorb firsthand the grace and communal generosity with which this could be achieved.

So in Dr Rajagopal’s memory of his uncle’s death, hands-on community support was central, and it eventually became a key principle guiding the creation of Pallium India, a national movement of lay community members who assist dying patients (and their families) in every personal and practical way. Another contribution to the core idea of “compassionate community” was derived from a later observation by Dr Rajagopal: in the so-called “medical industry” (the word “industry” evoking a monetary perspective if not an outright profit motive), patients die largely alone in intensive care units (ICUs), where they are often denied final goodbyes and reconciliations, tactile comfort, and emotional validation. This unnatural segregation of dying patients was brought to the attention of the wider public at the height of the Covid-19 pandemic in 2020, when family visitation in hospitals was sharply curtailed, but it well predated that period. Dying patients frequently find themselves seriously isolated, prisoners in ICUs; in effect they are stripped of basic human rights, including decisions about visitation and pain management, and all too frequently, the agency to participate in strategic decisions about their own treatment. 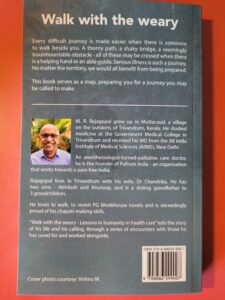 To further explain the evolution of his thinking, in his talk at Cornell Dr Rajagopal described a pivotal clinical experience that took place early in his career. His patient was a professor in early middle age who had young children. He was a man with metastatic disease and an ultimate, but not imminent, terminal prognosis. Having outlined a regimen for the management of his cancer-related pain, Dr Rajagopal told his patient to return when the pain recurred. The professor heard in that advice a message that his condition was hopeless, and he killed himself the next day. This was a tragically premature death, robbing him of time that he could have enjoyed with his young family, and depriving his children of a fuller legacy of memories. While his comment could not have been the only seed leading to this suicide, Dr Rajagopal belatedly understood that his words had been interpreted by the patient as an abandonment and, worse, as an unspoken negation of his value as a person. The professor did not have unrealistic hopes for a cure but had justifiably expected a palliative care physician to “walk the walk” with him, to be present supportively and empathically, along the way to his death. Even the most potent analgesic drugs would not alone suffice.

Mistakes and regrets, in medicine as in every human endeavor, have the potential to open up new directions, to expand into whole new areas of thought and work; in this instance there was Dr Rajagopal’s epiphany that almost any hardship, any sorrow, can be eased if a person does not feel entirely alone in facing it. In terminal illness, however, certain friends and family members will predictably stay away, not only because of hospital restrictions but because they might recoil from witnessing the rapid approach of death. Many dying patients are therefore in need of non-family surrogates or advocates.

From a population-based perspective, Dr Rajagopal had to accept that there would never be sufficient resources in his country to achieve his dream of a pain-free India, and that the full integration of palliative care into the practice of medicine is not yet on the horizon. But he also concluded that all of the persons who provide emotional and tangible support to the dying need not be medical professionals. In fact there have long been lay volunteers in hospitals, but more often than not they receive minimal training and are relegated to peripheral roles in which they have no sustained contact with patients. Dr Rajagopal came to regard such a situation as wasteful of a vital resource.

For all these reasons, Pallium India, having overcome numerous bureaucratic obstacles to exist, is based on a model of community-based palliative care that recruits and extensively trains lay volunteers to play meaningful roles in the final days of dying patients. Along the way Dr Rajagopal also realized that the establishment of lay “compassionate communities” occurs most successfully in “peacetime,” meaning not during the height of pandemics in which people are gripped with fear or terrified into inaction by the prospect of contagion. Inaugurated in Dr Rajagopal’s native state of Kerala, Pallium India has now grown into a network that extends across the world’s second-largest country. A not entirely unexpected benefit has accrued to the volunteers as well as the patients. Many of Dr Rajagopal’s volunteers feel that they are reaping rich rewards in the course of their service; and that helping one’s fellow humans in extremis affords the helper the possibility of reaching a level of altruistic happiness that elevates the spirit, realigns one’s moral compass, and satisfies in a way that nothing else can.