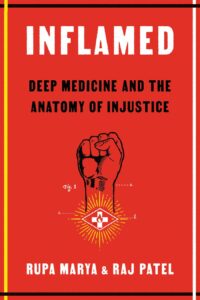 The central plea in Rupa Marya and Raj Patel’s Inflamed is to have the reader acknowledge that colonial capitalism, which separates society from nature, subverts the holism required to understand illness, and its intrinsic relationship to our contexts, histories, cultures and environments. Colonial capitalism, which dominates the ‘other’ by delineating ‘otherness’, is the unquestioned world view of modern medicine because the latter was forged at a time of colonisation. It has replaced indigenous cosmologies that were cultivated over centuries, reciprocal relationships between human and the natural world, passed down through oral histories. They argue that it is only through a return to an enlightened partnership with our exposome, the natural world, that the healing of our inflamed bodies, and inflamed planet, can begin (“We can be healthy only when the entire community is also healthy”). In Inflamed, we learn that Indigenous cosmology celebrates multitudes and the complexity of relationships, whereas Colonial cosmology seeks to categorise and impose social order. Medicine has been crafted in this same world view, perpetuated through the church of hospitals, the clergy of doctors and the texts of medical research and it has been used as a tool to disconnect the body from this wider context, in order to control it. But in doing so, we have unlearnt, we have forgotten, the intrinsic interconnectedness of all living things. This ‘holy war of society against nature’ has led to the degradation of soil, air, water and food systems, which in turn have caused havoc on our bodies through disturbances in delicately balanced systems and accumulations of industrial by-products.

Exhaustively researched, and organised through metaphors of bodily systems, the disruption to our internal ecologies is told through myriad examples of injustices, inequalities and inequities across the fault lines of racism, sexism and ageism, as well as legacies of persecution against indigenous knowledges. The authors lay bare the connection between industrial processes and autoimmune disorders; between the circulation of global debt and chronic disease; between the expansion of Orientalism and obesity; between air pollution and mortality from COVID19; between the patriarchy and post-natal depression; and between theories of racial hierarchy and hospital outcomes. That, deep down, we probably already know and lament all this, detracts nothing from the authors’ impressive achievement at laying out the issues in such excruciating detail.

There are three sensations one might feel reading this book. The first is that of helplessness. How can we step outside of the iron cage that surrounds us to tackle the very fabric of the societies in which we live? Acknowledging and understanding the problem is a good starting point but will it help to shift the seemingly inexorable drive of colonial capitalism? To this end, the authors provide examples such as the Tongan ‘sacred relationality’ principle to truly ‘know’ the other, or the Muckleshoot Tribal School, where every lesson is located in cultural heritage of the region, or the process of Rematriation where lands are returned to people and to nature, or through Epistemic Humility, a willingness to listen. The second is that of vulnerability. When you realise that much of what you have been taught is flawed, misguided, damaging and perpetuating a sickness of planet and people, then you are left wondering how to begin again. Here, the authors offer a manifesto to dismantle the colonial hospital itself, to invite you to live more simply, to give you permission to embrace this knew realm. The third is of hope. The authors embody the very principles they espouse by taking the reader on an intellectual journey across time, discipline, culture and language, effortlessly drawing on the learnings of tribes and indigenous people, weaving medical research with script, artefact, story, picture and poem in a tapestry that demonstrates to the reader what unbounded thought actually looks like. For a health professional, indoctrinated with a particular set of values grounded in western, colonial medicine, the point of the book is to demonstrate the richness of such inter-epistemic cross-fertilisation. It should be your starting point to engage in decolonisation of medicine, global health and higher education.

Inspirational as the volume is, it is not without its issues. The authors at times portray indigenous knowledge nostalgically as if domination and separation were not also troubles that ailed these groups. It is, at times, assumed that indigenous practice is underpinned by an inherent wisdom when our understanding of their practices is only recently becoming apparent. The multitude of examples do not at times demonstrate causality. Perhaps, there is insufficient recognition of the benefits and successes of modern medicine. Their argument that our bodies are inflamed as a result of systemic injustices is well made. But there is still a place for antibiotics, for vaccines and for diagnostic technologies. In the pursuit of a deep medicine that is far more connected to a philosophy of reciprocity with the natural world, these authors are well-placed to find a way to conciliate that which works from that which doesn’t.

Matthew Harris is a Clinical Senior Lecturer in Public Health Medicine, Imperial College London, and has worked in Brazil, Ethiopia and Mozambique in a variety of clinical and public health roles, including for the WHO. His research focuses on frugal innovation from low-income countries and decolonisation of global health.