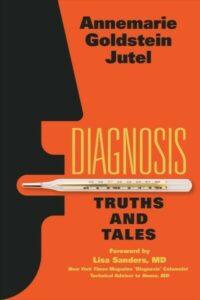 In a short verse from his posthumous collection Falling Ill (2016), American poet C. K. Williams offered a richly ambiguous representation of his experience receiving a terminal cancer diagnosis. The poem, “Diagnosis,” begins with a coherent reflection on the inadequacy of the doctor who delivered the news, on his own humiliation, and on the “blameless alliteration” of the disease label (multiple myeloma). But Williams’s poetic voice is belied by his stammering tongue, and the poem concludes: “that’s why I find myself in spite of myself // blurting out well that certainly makes things / interesting no? that’s what in my utter / witlessness came blurting interesting no?” In the moment of diagnosis, Williams’s reflectiveness is less the product of an artistic consciousness than it is an involuntary bodily response. And if his diagnosis “makes things interesting,” it also curtails his self-expression: part of what “makes things interesting” is literally left unsaid.

Annemarie Goldstein Jutel’s Diagnosis: Truth and Tales explores the problems and the possibilities of such scenes, providing a telescoping survey of the ways diagnosis and narrative intersect across a wide range of historical contexts, patient-practitioner dialogues, public health initiatives, and media representations. Diagnosis is ubiquitous. It does not only represent the paradigmatic achievement of modern medicine; its terminology and narrative templates have also been appropriated by patients, public authorities, advertisers, artists, and scholars. In each of these cases, diagnosis becomes a process through which we might understand the operations of power and authority by virtue of its claims to “truth.” Diagnosis resolves uncertainty by asserting a single explanatory story that collates scattered details and symptoms with a kind of inviolate inevitability, but the assumed clarity of diagnosis is also determined by the varied agendas and contexts of those who practice it. As a result, Jutel sees diagnosis not as a contraction of expressive possibility but rather as a “trigger” for the emergence of a wide variety of stories and tales.

Thus, the opening chapters document how the practice of diagnosis actually disturbs traditional boundaries that define the practice of healthcare. The first tackles the contradictions that define influenza or the “flu.” Influenza and “flu” are not quite the same: the former has a basis in virology and scientific certainty; the latter emerges as a shorthand for common symptoms that can be easily recognized by non-medical laypeople. But the respective authority of lab-based and lay diagnoses is immediately challenged in Jutel’s fascinating account. The scientific definition of “influenza” is often less a product of laboratory analysis than it is of state politics, border control, racial or ethnic fears, and the delayed administrative processes of coding and statistical assessment, from the 1918 influenza to the 2009 H1N1 pandemic; on the other hand, lay diagnoses of “flu-like symptoms” are deliberately encouraged by public health officials in narratives of civic responsibility that obviate the need for medical expertise. Furthermore, these two processes continually intersect with and alter one another, mimicking the circulation and mutation of the virus itself as it moves through populations and across time. (This chapter, published just before the COVID-19 pandemic began, is both prescient and provocative in its alignment with public health narratives of the past 18 months.)

Continuing this work, the second and third chapters approach problems of clinical diagnosis from the respective positions of patient and doctor. The former charts how alternative currents of information (from pharmaceutical advertisement to “Dr. Google”) inscribe both skepticism and certainty into patients’ narratives of control by enabling various forms of self-diagnosis. The latter considers doctors’ attitudes toward the same crisis of control: in a survey that spans the hundred years between the elaboration of modern medicine and the age of informed consent, Jutel shows how doctors’ historical attitudes toward diagnosis reflect not only their power over patients but also their efforts to avoid “quackery” through communicative restraint and hesitation. The tension between patients’ and practitioners’ approaches to diagnosis therefore highlights a need for the thoughtful negotiation of narrative authority.

The second half of the book assesses diagnostic narratives embodied within narrative fiction, film and television, comics, and multidisciplinary scholarship, spanning a wide array of styles and intended audiences. The chapter on narrative fiction, for example, reads works of literary fiction (Ian McEwan’s Saturday) alongside potboiler thrillers (Susan Hill’s The Various Haunts of Men); the work on film and television considers “prestige” serials (Breaking Bad), independent films (Still Alice), theatrical adaptations (Wit, Angels in America), and network procedurals (Grey’s Anatomy, House, MD); the section on comics engages Ian Williams’ The Bad Doctor (an adult graphic novel about a GP in rural Wales) alongside reflections on the didactic function of comic strips for children and the pathologies of superheroes; the discussion of “intellectual documentaries” notes the insights that come from sociology (Mildred Blaxter’s use of diagnosis to highlight organizational structures), linguistics (Suzanne Fleischman’s critical assessment of diagnostic utterances), and pop cultural analysis (Martha Stoddard Holmes’s critique of cancer ribbon symbolism), among others. The approach and the results are scattershot. These chapters offer a sampling of case studies rather than a comprehensive assessment of a form or medium, and their analytical methodologies vary considerably: for example, the section on film and television leverages a strong command of formal analysis (shot composition, framing, pacing) and dramaturgy; by contrast, the work on comics privileges a critique of content over the discussion of form (panel layout, perspective, use of line drawing, color, etc.).

This shortcoming may, however, highlight the larger function of Jutel’s work, which questions its own assertion of explanatory power in its final chapter: what are we to make of narratives in which the results of diagnosis are deliberately marginalized? In a clever line of argumentation that links the Marvel Avengers film to Audre Lorde’s The Cancer Journals, Jutel considers stories that reject the “transformative” power of medical diagnosis by proffering other, equally valid modes of “truth telling.” This acknowledgement reflects backward throughout the book, indicating that narratives of empowerment surrounding diagnosis are often available only to those already occupying privileged positions: generally white, educated, middle- or upper-class patients and practitioners who have access to the appropriate discourse, episteme, and venues of speech and writing. The “double force” of diagnosis threatens always to offer the “final word”: diagnosis is an act of cleavage that clarifies and distills even as it excises and removes. Jutel’s work eschews this effect: in its achievements and its omissions, Diagnosis: Truth and Tales provokes thought rather than simple assent. It offers a set of ideas that enable its readers’ various responses rather than prescribing an inevitable conclusion.

And that certainly makes things interesting, no?

Jeffrey Brown is Assistant Professor of English in the Department of Humanities at the University of the Sciences in Philadelphia.