In medical school, we learn what can go wrong in the human body. We also learn, though, that we’re essentially all the same. From DNA to macro anatomy, we’re all made of the same stuff, and that’s why we’re able to study medicine in the first place. 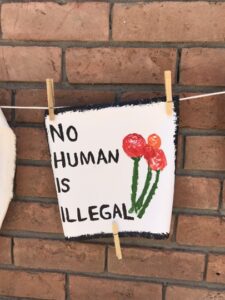 After two months of working with incarcerated immigrant women and children at a United States immigration detention center, I learned just how much humans are treated differently. There are many people in this world who forget that humans are all the same, that we all deserve the same dignity and that, by international law, we should have the same rights. The reality I was witnessing was in direct contrast to the medical facts I was learning.

Reality: In my eight weeks on the ground, over 1,000 women arrived at this detention center, children in tow. Over 95% had fled rape, torture, and death threats in Honduras, Guatemala, and El Salvador. Their persecution was strong enough for them to travel over 1,500 miles through deserts, rivers, and lands controlled by drug cartels. Most had calculated that they should risk leaving other children behind so that they can seek status in the United States and hope to be reunited one day.

And yet, increasingly, the U.S. government determines that their fears are not “credible” enough to allow them to seek refuge here.

Fact: Humans seek the release of oxytocin via physical contact.

Reality: At this center, there are strict rules against physical contact with “residents.” On paper, this seems reasonable, especially given the horrible reports of abuse in U.S. Immigration and Customs Enforcement custody.1, 2

In practice, however, this means that when a woman bares her soul and hysterically cries in front of you, you cannot offer a hug or a hand to hold. One day, after speaking with a little boy and his mom, I said farewell and turned my head towards my paper to finish writing my notes. All of a sudden, the little boy had his arms around me in a hug. My natural instinct was to reciprocate with a loving embrace. Given the rules of the environment, though, all I could do was pat him lightly on the back and hope the hug would end before a guard saw me.

Reality: Every woman at this center has it tough, having not only fled their homes but now trying to navigate an immigration system that most Americans do not even understand. The one solace, though, is that the vast majority speak Spanish. When they are waiting around the visitation trailer, they can strike up a conversation with the woman sitting next to them.

For clients who only speak other languages, though, their experience in detention is even more isolating. I accompanied a woman who speaks Mam, an indigenous Mayan language, to her asylum interview. She didn’t know it was her 20th birthday until I told her that the birthdate she wrote on her intake form was that day’s date. The government was ultimately unable to find an interpreter who spoke her dialect. Having been forced to navigate a complicated immigration process without the ability to communicate, I found her after her interview standing over a garbage can, trying not to vomit.

Fact: In humans, the need to urinate is transmitted via general visceral afferent fibers.

Never was this clearer than when women made a point of asking for permission to have their basic needs met. A woman once asked if she could use the bathroom, and when I pointed it out to her, she clarified, “No, I meant, am I allowed to leave this room to go to the bathroom?” She had clearly been denied this right in the past and could not risk breaking a rule.

Global health is evening the playing field: acknowledging that we are all human and making sure that as many humans as possible can have access to healthcare.  That is exceedingly challenging, however, when the first step in the process of implementing a global health project is convincing others that all humans are essentially the same and deserve basic decency.

Sarah MacLean grew up in the suburbs of New York City before attending The University of North Carolina at Chapel Hill. She is currently a fourth-year medical student at the Icahn School of Medicine at Mount Sinai and will continue her training in pediatrics residency at the Children’s Hospital of Philadelphia. She is particularly interested in a career that integrates clinical medicine with global health research and advocacy.