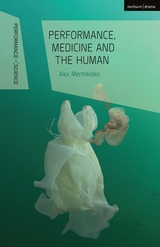 In 2005, US Senator Sam Brownback sponsored a bill seeking to outlaw the creation of “human chimeras,” arguing that the mere existence of “chimeras”—embryos that incorporate cellular material borrowed from either a non-human or another human source—“raises serious ethical objections… because they blur the line between human and animal, male and female, parent and child, and one individual and another individual.” A decade later, Alex Mermikides and her collaborators—a group of UK-based theatrical professionals and medical practitioners—created bloodlines, a theatrical work that challenged such norms of individuality by exploring the multiple subjectivities born from leukemia and its treatment. They called their performance company Chimera.

An analysis and justification of the chimeric bloodlines lies at the heart of Alex Mermikides’ new book, Performance, Medicine and the Human: a “heart” that must be understood, through Mermikides’ layered approach to argumentation and analogy, as equally a) an organ that powers circulation, b) a grounds for posthumanist ethics, c) a narrative center, and d) the emotional core of her personal life. Mermikides’ book is, itself, a chimera: a provocative interdisciplinary bricolage whose individual parts only appear to threaten their collective coherence as they present profound insights regarding human life, sociality, and value. As a result, it offers a powerful rejoinder to prevailing political and medical assumptions regarding human integrity, countering the threat of “blurred lines” with a sensitive understanding of how the knowledge and maintenance of boundaries must also include the possibility of their collapse and reconstruction.

Mermikides’ first project lies in the redefinition of all three of her title’s central terms: “performance,” “medicine,” and “human.” In her approach to the latter two, she follows Foucault. Isolating focus on the birth and development of Western science, she demonstrates how the practice of modern medicine privileges the assumption of disembodied rationality in its construction of human values and human rights, simultaneously alleviating some forms of human suffering while also establishing systems of surveillance and domination that perpetuate others. Mermikides’ own ethical investments lie in posthumanist theories that fracture the assumed coherence of the human subject, either by contesting its bodily integrity through medical interventions or by situating it within dispersed, intersubjective networks of multiple human agents.

Her approach to the third term—“performance”—at first appears more modest. Rather than in broad theories of social performativity, the book’s interests lie more narrowly within theatrical performances—but by focusing on theatre as a set of defined and intentional practices, Mermikides brilliantly outlines how the processes of medical boundary-making also set up the advantages of chimeric intersection. The second chapter describes how norms of visibility established by bounded theatre spaces ultimately define the history of medical practice and education, both literally (in anatomical theatres) and metaphorically (through strategies of looking). Similarly, her third chapter offers an analysis of actorly virtuosity in the “breaking bad news” simulations performed by aspiring clinicians: by ironically emphasizing the professional skills that distinguish actor/patients from medical students, these bounded simulations reinforce asymmetries that humanize the “real” clinician only through the melodramatic spectacle of a patient’s “false” suffering.

Thus, the first half of her book creates a necessary pretext for Mermikides’ two boundary-breaking performances: bloodlines and Careful. In bloodlines, the “clinical gaze” that defines the leukemia patient as an object of visual attention is broken apart: through the use of layered projections and audio recordings, Mermikides and her collaborators challenge the use of militaristic rhetoric in immunology and cancer treatment by destabilizing oppositional binaries (health/illness; patient/doctor; recipient/donor; etc.). Careful, on the other hand, redefines the liminal position of nurses within medical practice: recognizing that nurses are both the instruments as well as the targets of objectification and surveillance, Mermikides’ group devised a performance that critiques gendered assumptions of “natural” empathy and the lack of recognition offered to the skilled performance of emotional labor, thereby advocating for an intersubjective, posthumanist approach to medical ethics and accountability.

Mermikides contextualizes her theatrical work through potent interventions in many ongoing discussions in health policy and the medical humanities, from the implementation of semi-scripted treatment protocols to the utility of narrative medicine. But many of the book’s most inspiring moments arise from minor anecdotes: for example, discussions with her brother that prompted bloodlines, or a moment in a performance workshop in which “patient” and “caregiver” learned to move beautifully as one. Such eclecticism is, of course, part of the book’s chimeric structure, which challenges the reader’s ability to negotiate the text’s scholarly and social contexts as well as the impact of its conclusions.

However, to present this sudden pivoting between topics, incidents, dialogues, and approaches as a criticism of the book would be to miss the point—or, in fact, it would be merely to rehearse a performance Mermikides herself offers as she reexamines the efficacy of her own work. At the end of her discussion of Careful, for example, she questions how the performance may ironically have amplified some of the harms it presumed to address: by situating its nurse-characters as the subjects of tragic micro-narratives, it used the “suffering of the nursing community… to display our own values, beneficence and impact” (157); moreover, this “impact” itself may have justified a logic of financial expediency in the politics of public health, offering “proof” that the arts might be used to resolve failures of care rather than expensive and necessary systemic reforms.

This ironic paradox is central to the long history of Western theatre, as Mermikides shows in her concluding reflections on the legacy of Aristotelian catharsis in the asymmetrical practice of empathy. The solution, though, also lies in the history of theatrical performance: a mode of art defined by its limits—by history, by the architecture of time and space, by the determinacies of the script—that nevertheless always promises the possibility of something new. In this sense, Performance, Medicine and the Human may itself become a stage: a platform, valuable in its own right, whose contingencies will also allow similarly necessary work in medical performance studies to play out.

Jeffrey Brown is Assistant Professor of English in the Department of Humanities at the University of the Sciences in Philadelphia.