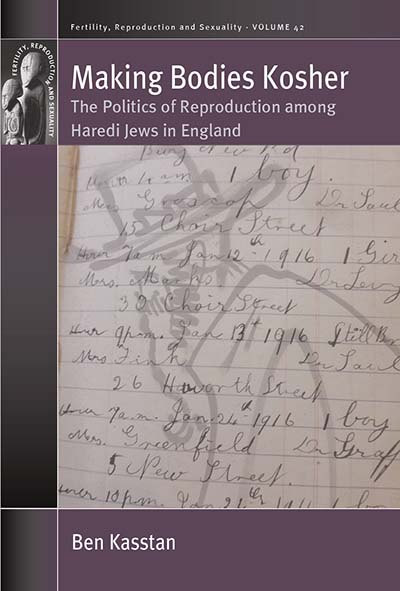 In Making Bodies Kosher, Ben Kasstan, a social and medical anthropologist, explores how Haredi (strictly religiously observant) Jews navigate the complexities of engaging with biomedical maternity and infant health services whilst maintaining, “local under-standings of how a Jewish body should be protected.” Using a combination of archival records and oral histories to look at historical Jewish Manchester from the late-nineteenth and early-twentieth centuries and ethnographic interviews he has conducted with Jewish families and medical figures living in contemporary contemporary Jewish Manchester, Kasstan shows how healthcare was and is a borderland where different understandings of well-being can coexist and sometimes compete. By doing so, the book firstly sheds light on how the ways through which individuals make sense of differing biomedical and religious models of health, and secondly on the position of ethnic and religious minorities in respect to mainstream medical institutions and beliefs.

In part 1 Kaasten questions two received wisdoms within public health discourse: that Haredi Jews form a monolithic “ultra-Orthodox Jewish community” and that this community is “non-compliant” and “hard to reach.” In chapter 1, Kasstan exposes the myth of the idea of a Jewish “community” instead demonstrating the differences and divisions that have existed among Jews in the UK, and Manchester in particular, both historically and today. For example Jewish immigration in the late nineteenth century saw tensions between the existing UK Jewish community and the new incomers. In the late-nineteenth century this resulted in pressure placed on the immigrants by the established Jewish community to assimilate. In a similar way, today, there are anxieties from the mainstream Jewish community about the growing number of Haredi Jews, who are projected to form the majority of Jews in the UK by 2031. In chapter 2, Kasstan looks at the response of religious Jews – both among the immigrants of the nineteenth and early-twentieth century, whom he terms émigrés, and the Haredi community today – which has been to to insulate their community from outside influences. However, Kassten shows that this is not an outright rejection of biomedicine, showing the misrepresentation of Hardei Jews “hard to reach”. Rather, Kassten demonstrates how Religious Jews, both historically and today, have been involved in a process of negotiation between, “biomedical and Judaic cosmologies.”

Part 2 then looks at this negotiation in two specific areas – maternity care (in chapter 3) and child vaccinations (in chapter 4). The interaction of Haredi Jews and NHS maternity services is an interesting and significant example of health care as borderland because childbirth is one of the few times when Haredim, “touch the outside world”. The chapter principally focuses on the maternity care provided by Haredi doulas who, “attempt to negotiate the delivery of NHS care around childbirth in order to make bodies kosher.” In many ways they exemplify the idea of the borderland. They occupy a liminal space – they are there to support childbearing women, but also position themselves as being, “advantageous for the local NHS authority because they can contribute to making mainstream maternity services more accessible for Haredi Jews.” They also blur the boundary between medical and lay care – they are not medical professionals, but operate in a medical space, and trade on their medical knowledge as well as that of Halacha (Jewish law). It would have been interesting at this point to also hear from NHS practitioners (there are no interviews with NHS practitioners except for a small number of Haredi midwives and doctors), to also understand their perspectives on operating within this important borderland. Chapter 4, which looks at childhood vaccinations, critiques the representation of Haredi Jews as being opposed to vaccinations because of their “religious beliefs” or “cultural factors.” Kasstan demonstrates that, rather than being something peculiar to Haredi Jewish parents, their hesitance and ambivalence towards vaccination reflects wider attitudes with the UK population. Again, Kasstan, powerfully shows the limits of the characterisation of Haredi Jews as “hard to reach,” and the limits of the term within public health discourse.

Overall, this is an accessible, interesting and fluently written book which is a useful and timely addition to the literature in this area. Making Bodies Kosher will prove a valuable resource to those engaged in medical humanities.

Angela Davis is based in the Department of History and Geography at École Jeannine Manuel in Paris. She is a historian of motherhood with interests in maternal and child health and welfare, and the history of the family more broadly.