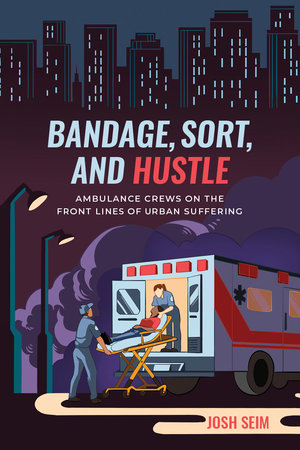 This book offers a stunning analysis of the Emergency Medical System (EMS), its frontline workers, and its patients. Seim concentrates on the ambulance as an institution that, because of its mission to help the suffering, assists in governing the urban poor through labor processes. The labor processes identified are Seim’s three central themes: “bandaging,” “sorting,” and “hustling” bodies. Seim’s ethnographic deep-dive into the world of urban ambulance work as “people work” and the labor processes that define it attempts to make sense of how the poor, marginalized, disenfranchised, and otherwise “othered” people are bandaged, sorted, and hustled within the urban setting by those who serve and protect the community.

The labor process of “bandaging bodies,” or the “physical regulation of ‘spaces in bodies,’” is Seim’s definition of clinical interventions into the body, to treat illness and injury. Seim states that crews bandage bodies on a complaint-based continuum, a scale that ambulance crews use to morally classify bodies. “Legit” patients are viewed favorably by crews because their complaints are deemed medically valid, require more clinical knowledge and interventions, and fulfill a sense of vocation within the crew—the reason why they entered this type of people work. “Bullshit” patients are the opposite of “Legit” patients, representing the bodies in spaces work that requires little more than a ride to the hospital for a minimal medical complaint. The regulation of “bodies in spaces” is evident when a crew is presented in the field with a “bullshit” patient that wishes to be transported to the hospital for a social problem. The crew must perform sorting labor to “medicalize the body,” because crews are expected by emergency department (ED) staff to arrive with a “legit” patient.

Seim seamlessly turns from the bandaging of bodies to the sorting of bodies. Sorting bodies is the part of the labor process that attempts to restore order to areas occupied by “spatially mismatched” persons. Essentially, bandaging and sorting are labor processes that govern the urban poor through a taxonomy of suffering. This is one of the most interesting and informative parts of Seim’s analysis. Bandaging and sorting patients that are deemed “social burden” cases by the public or the police are less about temporarily bandaging bodies via the legitimacy of a potential medical or psychiatric complaint, and more about temporarily bandaging the public areas from being “injured” by the presence of poor, suffering, marginalized, and vulnerable populations. This “burden shuffling” does not end with air ambulance company transport, but rather is a process reset by ED staff. Staff discharges the “bullshit” or “burden” patients back onto the streets, 9-1-1 is called again, and the labor process is repeated.

Increased rates of hustling bodies can lead to crew exhaustion, and practices of labor self-regulation that is misidentified as laziness by supervisors. Without help in hustling, crews become emotionally jaded, supervisors become despondent to crew needs, and the capitalistic wheel keeps spinning because emergencies, the company’s need for financial capital, and “burden shuffling” are not stopping. Seim states that hustling bodies to the point of exhaustion and coping with such exhaustion by crews self-regulating labor puts the community at risk, a risk shared by both the company and the workers. This “lean fleet” system is not habitable to a healthy workforce, or a responsible delivery of emergency services to the community.

The framework that Seim uses of a labor process governing the suffering of the urban poor and marginalized is a concept that is certainly salient in an American healthcare system that relies so much on the profitability of medical treatment rather than the Hippocratic tenets upon which medicine was built. Bandage, Sort, and Hustle could easily be included on medical sociology, occupational sociology, and/or medical humanities syllabi. It is a great source for highlighting how well-intentioned labor processes within seemingly benevolent occupations can further marginalize people and reproduce social inequalities.

Christopher Bosley is a PhD student in Sociology at the University at Buffalo. My research is primarily in medical sociology, concentrating on medical occupations and the emergency services.