In this blog, Kesavan Rajasekharan Nayar and his colleagues discuss the need for an international, multi-dimensional mass-gathering policy, using the case study of a mass-gathering phenomenon for religious purposes in Kerala, India which draws about 45 million people annually. Mass-gathering in such huge numbers poses considerable challenges in terms of communicable and non-communicable disease surveillance, emergency preparedness, environmental health, vaccination, and provision of healthcare in a non-normal situation apart from crowd management. 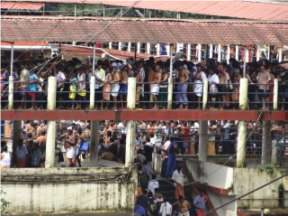 Mass-gathering is normally defined as an “organized or unplanned event if the number of people attending is sufficient to strain the planning and response resources of the community, state or nation hosting the event”. Mass-gathering for religious and spiritual purposes has been in focus due to extremely high rates of morbidity, mortality and injuries resulting from outbreak of diseases and stampedes. This has become a recurrent phenomenon in a number of religious congregations including yatras, Kumbh melas, holy visits and shrine-specific special occasions.

Under-reporting of human stampedes is a serious problem which is revealed in one of the very few analyses undertaken in India of around 40 human stampedes between 2001 and 2010.2 The Ram Janki temple stampede in 2010 which killed 63 people highlighted the lack of high quality epidemiological data. Another such tragedy occurred in Ratangarh temple in Datia district of Madhya Pradesh on 13th October, 2013 where 115 people died and many were injured. The reasons for such tragedies are often attributed to rumors, minor accidents during waiting periods, poor crowd management, inefficient maintenance of law and order, indiscipline, lack of hygiene and inadequate sanitary facilities. It is found that religious and political events had a higher relative number of deaths in stampedes. Experiences from pilgrimages such as the Hajj resulted in interventions such as crowd management and scientific online queuing systems.

Evidently, mass-gathering health and medicine is still in its infancy in India and other developing countries where such huge congregations take place regularly. Undertaking systematic studies on the phenomenon of mass-gathering would help in preventing mass fatalities in future. Mass-gathering poses considerable challenges in terms of communicable and non-communicable disease surveillance, emergency preparedness, environmental health, vaccination, crowd management, etc. Health services are normally tuned to meet routine requirements and provide services in a limited sphere. Such services are unusually strained during mass-gatherings and “may require major strengthening of existing services and potentially the introduction of new or enhanced methods for managing disease and other public health risks”.3

Our study on the impact of the Sabarimala pilgrimage, located at the Periyar Tiger Reserve in the Western Ghat mountain ranges of the Pathanamthitta District of Kerala at a height of 1534 feet, was designed to capture environmental, medical and health data during two peak seasons in 2015 and 2016-17 and the interim period on a monthly basis. This environmentally sensitive and vulnerable area hosts one of the largest congregations of people (estimated to be around 45 million every year) for religious purposes within a short period of time.

It was observed that the water quality parameters – especially pH values, COD-BOD values and the Total Suspended Solids and the Coliform count – were adverse, especially during the two intensive peak periods. Based on the responses of the pilgrims, it was found that masculo-skeletal problems rank high, evidently due to the strenuous climb. The cold weather, stress and strain while climbing the steep hill, high altitude etc. are natural factors which contribute to many symptoms. Fever, cough and headache were also reported by many. Breathlessness and chest pain are symptoms requiring cardiac care. A large number of people experienced problems while climbing the hill. Leg pain and joint/muscle pain are common problems. Some pilgrims also experienced breathlessness, chest pain and headache. Majority of pilgrims who sought care at the health facilities presented with respiratory tract infections (38.5%), followed by gastro intestinal diseases (20%). Around 10% of pilgrims suffered from cardio-vascular diseases, and 0.1% suffered myocardial infarction too. Surgical cases were around 20%. This was also found among Hajj pilgrims. For instance, Public Health England Birmingham Laboratory’s (PHEBL) screening reports and three-year surveillance reports on 202 Hajj and Umrah pilgrims from the UK show higher prevalence of respiratory tract infections. Reports show that disease outbreaks occurring at mass-gatherings have resulted in the international spread of communicable diseases.3

We think that an international Mass-Gathering and Safe Pilgrimage Policy (MGSPP) is required after considering the evidence base from across the world on a multidimensional platform. A committed and flexible monitoring mechanism which considers the environmental, public health and psychosocial factors is also needed.  Only such initiatives can make mass-gathering a humanitarian phenomenon.