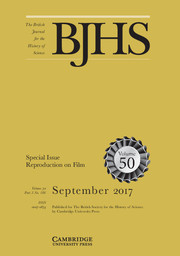 This special issue of the British Journal for the History of Science, entitled ‘Reproduction on Film’, is a rich seme for those of us in the medical humanities with interests in history and representation (whether through literature, film, or any other medium). The articles gathered here investigate the two-way influence between medicine and its representation, both among medical practitioners and its representation to lay audiences. The special issue is co-edited by Jesse Olszynko-Gryn, Patrick Ellis, and Caitjan Gainty and the introduction gives an overview of reproduction on film from the birth of the medium with films like The Cabbage Fairy (1896) by film pioneer Alice Guy-Blaché, to the modern day and such films as What to Expect When You’re Expecting (2012). Olszynko-Gryn and Ellis propose that ‘moving images not only have significantly shaped the scientific understandings, private experiences and public cultures of reproduction, but also have done so in media-specific ways’ (387).

One recurring theme in the issue is the changing nature of pregnancy advice, and how film has been implicated in supporting outdated or unscientific theories of pregnancy. In ‘A cinema for the unborn: moving pictures, mental pictures and Electra Sparks’s New Thought film theory’ Patrick Ellis gives an account of Electra Sparks’s journalism. A suffragette, Sparks advocated a ‘cinema for the unborn’, using New Thought as a means of extending the influence of ‘maternal impressionism’, the theory that the mother’s thoughts and emotions could be ‘impressed’ onto her unborn child, showing themselves through disfigurement or mental illnesses. Meawhile, in ‘”Drawing aside the curtain: natural childbirth on screen in 1950s Britain’, Salim al-Gailani describes the development and promotion of the ‘natural childbirth’ concept by British physician Grantly Dick-Read and his use of educational films in attempting to promote his unevidenced practices of training women to give birth without anaesthetic.

Caitjan Gainty argues for the affinities between obstetric practice and the medium of film itself in ‘”Items for criticism: not in sequence”: Joseph DeLee, Pare Lorentz and The Fight for Life (1940)’. Gainty describes the ‘streamling’ approach to birth of obstetrician Joseph DeLee as one that stands in stark contrast with Dick-Read’s approach. ‘Streamlining’ involved medical (and pharmaceutical) intervention at every stage of the birth process, a highly medicalised approach to labour that resulted in increased mortality rates despite a rise in hospital births. DeLee saw the slick and rational cuts and edits of film as reflective of his ‘tidy’ and interventionist approach. Gainty gives an account of Pare Lorentz’s film The Fight for Life, albeit in a tiny role, and compares the standards of the two filmmakers to show the movement from reproduction on film as a medical and educative event, to medicine as it is portrayed and understood by the film-going or television-watching public.

In their articles, both David A Kirby and Jesse Olszynko-Gryn show the increasing acceptability of pregnancy on film and television respectively. Kirby’s ‘Regulating cinematic stories about reproduction: pregnancy, childbirth, abortion and movie censorship in the US, 1930-1958’ shows how reproduction on screen in Hollywood movies was impacted by the Hays code. Kirby’s article gives ‘the first comprehensive examination of movie censorship and human reproduction,’ arguing that to understand the role of pregnancy and the Hays committee is to ‘pay as much attention to the cinematic stories about reproduction that are not told as we do to the stories that do make it on to the screen’ (455). Olszynsko-Gryn’s article, ‘Thin blue lines: product placement and the drama of pregnancy testing in British cinema and television’ follows the use of pregnancy tests, particularly the Clearblue brand, on British screens and, as he does so, traces changing attitudes towards pregnancy testing. As well as describing the rise of pregnancy tests in popular soap operas, including Coronation Street, Eastenders and Brookside, Olszynko-Gryn finds the cultural importance of the pregnancy test in visual artworks such as Liv Pennington’s Private View and Gina Glover’s Yes!

Finally, Janina Wellmann describes the cinematographic nature of the ‘digital embryo’ in ‘Animating embryos: the in toto representation of life’. Wellmann describes the development of animated embryos, created through computer simulation, and argues that the increasing complexity and availability of such technologies shows the interdependence of the unseen foetus, its representation, and the culture that receives increasingly complex images from inside the mother’s womb.

Taken as a whole, this special journal issue provides not only an account of the role of film in the representation and understanding of reproduction in the twentieth and early 21st centuries, but also reminds the reader of the importance representation can have in shaping the cultural construction of our experiences, even those as intimate as pregnancy and birth, and development.