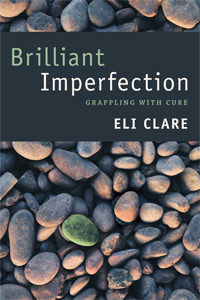 Brilliant Imperfection is an elegant addition to the current topical debate concerning disability and cure written by disabled, transgender activist, Eli Clare. Combining personal memoir and acute observation with critical disability and transgender accounts of the medical-industrial complex and its drive to ‘cure’ human body-mind anomalies, Clare intermingles the queer politics of disability, gender, sexuality and eco-activism in order to create an intensely rich literary work.  In essence, Brilliant Imperfection highlights the tensions and contradictions in contemporary anti/pro-cure debates.  While Clare’s embodied difference informs both his personal beliefs and values about gender, disability and cure, it also forces him to critically engage with and address the contradictions inherent in such beliefs (ultimately in order to thoughtfully question and modify them).  Structurally, consisting of an ‘Introduction,’ and a section titled, ‘A Note On Reading This Book: Thinking About Trigger Warnings,’ Brilliant Imperfection takes the reader through ten chapters of ‘cure’ in all its conceptual and material forms. For instance, in Chapters 1 and 2, titled ‘Ideology of Cure’ and ‘Violence of Cure’, Clare argues how disability and cure are constructed in society with the intention to repair, overcome and restore the impaired and damaged ‘body-mind.’[1]  Consequently, as Clare rightly states, the ideology of repair is often underpinned by a culture of violence that relies on ‘ableist inventions of defectiveness’ in order to eradicate disabled body-minds (23).  Indeed, never is the disabled body-mind a means to think about how variation and difference may provide what disability scholar, Tobin Siebers calls, non-normative positivisms.  A theoretical argument that makes a claim for disability as a beneficial and alternate way-of-being in the world – a mode of disability existence which Clare eloquently and repeatedly expresses in the beautifully rendered vignettes that precede each chapter and which sensitively and poetically explore human and non-human variation evident in society and nature.  For instance, throughout Brilliant Imperfection, Clare often uses motifs of nature in order to consider the complexity of the natural and unnatural alongside humanity’s desire to homogenize nature only to embrace and restore nature’s lost or damaged biodiversity.  For example in Clare’s discussion of the American Prairie – nature and human history are presented as sharing a long, shameful and uneasy history of ‘grass, dirt, bison massacre, genocide’ alongside a concerted collective effort ‘to undo the two centuries of environmental destruction wreaked by plows, pesticides, acres upon acres of soybean and corn’ (16).  By placing humanity’s homogenization of nature in opposition to humanity’s desire to restore nature’s lost biodiversity, Clare tries to ‘grasp their meanings asking, what is ‘normal?’ (17).  As Clare questions: ‘Is an agribusiness cornfield unnatural, a restored prairie natural?’ (17).  In this instance, for Clare, there are no easy or straightforward answers to such questions.

Alternately however, when Clare draws attention to the capabilities of his differently abled body, diversity and difference clearly challenges the ‘norm’ in a more meaningful manner.  For example, in the vignette titled, ‘Twitches and Tremors,’ Clare draws attention to the generative possibilities of the anomalous disabled body in erotic play as two mutually interdependent lovers (one being himself) engage in an act of seeking out sexual pleasure, stating: ‘I’ve had lovers tell me how good my shaky touch feels, tremors likened to extra caresses […] their words an antidote to shame.  But until now, I had never felt the pleasure they describe.  Your twitches spread across my skin – tingle, echo, dance’ (19).  Historically, in western culture, the medical industrial complex has consistently desexualized the disabled body, devaluing and limiting its potential in the making of pleasure.  However here Clare counters such stereotypes of asexual disability with a tender recollection of disabled bodies intimate, enraptured and innovatively engaged in new erotic possibilities – possibilities which are the outcome of impaired, vulnerable bodies.  By ‘grappling with cure,’ Clare consistently weaves poetic images of nature and human difference with medical, social and personal debates of disability and cure.  In Chapters 3 and 4, titled ‘In Tandem With Cure’ and ‘Nuances of Cure,’ Clare discusses his own mental retardation and cerebral palsy and of the humiliating life-long experience of enduring medical diagnoses, while acknowledging being drawn to the seductive possibilities of cure.  In Chapter 5, titled, ‘Structure of Cure,’ Clare examines the pervasive presence of the medical-industrial complex and its bid to create and expand new markets which promise to ‘correct’ human imperfections that trouble the individual, such as skin colour.  Here Clare directly targets the medical industrial complex for its unashamed pursuit of inventing new biomedical and pharmaceutical markets for pure profit, stating: ‘In cure’s long tradition, this declaration of trouble paves the way for selling repair’ (78).  At the same time, Clare confesses to desiring the expertise and promise of new biotechnology in order to help him cope with both his disability and his transgender identity.  Indeed it is the cognitive dissonance that he experiences as a disabled transgender man, that gives rise to Clare’s desire for acceptance for his disability, while also enticing him to try new medical procedures and drugs that promise to ‘cure’ his gender dysphoria.

The exploration of Clare’s complex disability and gender identity and the desire for both acceptance and cure is when Brilliant Imperfection is at its best.  In Chapters 6, 7 and 8 titled, ‘How Cure Works,’ ‘At the Centre of Cure’ and ‘Moving Through Cure,’ Clare shifts from how ‘cure’ has been elevated in the cultural imaginary as a promise to heal or improve the individual, while also revealing the history of medicine and biotechnology as a value-laden promise that has relied heavily on the devaluation of human variation and difference.  Nonetheless, Clare argues for the understanding of bodies as never static, but always in constant motion and in transition, which, as Clare asserts, biomedicine is undoubtedly a part of.  For instance, in ‘Wanting a Flat Chest,’ Clare argues that ‘I thought I understood self-acceptance and love […] until […] I discovered an unshakable desire to reshape my body-mind using medical technology – first with chest reconstruction surgery and later with hormone replacement therapy’ (137).  In Clare’s gender politics, the medical industrial complex is not just about profit but also about a desire for attaining a sense of wellbeing for bodies in constant motion and flux.  As Clare states, ‘All of our body-minds are in motion from the moment of birth to the moment of death’ (137).  Similarly, ‘Gender transition in its many forms is simply another kind of motion’ (137).

Embedded within Brilliant Imperfection’s aesthetic and poetic musings and Clare’s constant self-questioning, there is a critical disability discourse that directly targets the medical industrial complex.  It is through an ideology of ‘cure’ that the medical industrial complex has, according to Clare, historically and systematically devalued human variation and difference, giving rise to institutions that have and continue to facilitate the eugenic treatment of alternate human lives.  On this matter, Clare speaks from personal experience as he details the continually shifting medical terminology and treatment that has somewhat oppressively defined his social identity.  However, in Chapters 9 and 10 titled, ‘Impacts of Cure’ and ‘Promise of Cure,’ Clare also declares how medicine and technology have created new interdependent connections between marginalised lives and facilitated lives that would have otherwise been lost.  As Clare claims, ‘I, […], am alive because of medical technology and the ideology of cure, which drives the discovery and development of that technology’ (183).  Nonetheless, Clare also laments that ‘Grappling with cure has led [him] to a maze of contradictions’ from which he now wishes to ‘step out’ and ‘let cure be the contradictory mess that it is’ (183).  Unable to detangle the knotty problem of the ‘complexly woven’ issue that is ‘cure’ (187), Clare finally returns to the motif of the ‘restored prairie’ a place in which nature and the human intermingle and cannot be undone, but also a place where a choice must be made between ‘monocultures and biodiversities, eradication and uncontainable flourishing’ (187).  Finally it is here in which Clare demands acceptance in a world that is in constant transition; that is both ‘imperfect and brilliant,’ a world in which Clare states: ‘I walk – a tremoring, slurring human, slightly off balance, one being among many’ (187).  In Brilliant Imperfection Clare sensitively tackles personal and social ambivalence in what is undoubtedly a very difficult (and at times a personally painful) subject matter.  In Clare’s provocative and engaging book, disabled and transgender lives are at once subjects requiring the professional world of medicine, while also demanding a critique of its uneven social structures and power relations that have given rise to discriminatory practises that continue to impact upon disabled and alternate lives today.  Overall, Clare’s Brilliant Imperfection is a welcome and accessible addition to growing academic and activist debates concerned with the political issue of disability and cure in the medical humanities.

[1] Clare’s conceptual arrangement of body-mind is an attempt to remove hierarchical dualisms within patriarchy that conventionally presents the mind as superior to the body and the human mind as a key and defining feature that separates humans from other species.