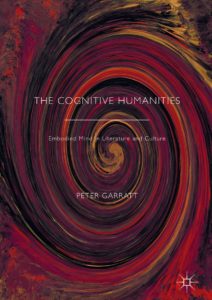 It is a difficult task to collect work in a coherent introductory volume for a field as diverse, divisive, and multi-disciplinary as the cognitive humanities. Peter Garratt’s The Cognitive Humanities: Embodied Mind in Literature and Culture humbly follows the bulky Oxford Handbook of Cognitive Literary Studies edited by Lisa Zunshine in 2015. But the present collection aims to represent the prevalence of more radical elements of cognitive science and philosophy of mind than the latter. This means that in lieu of critical essays applying concepts from cognition to narrative theory, work in neuroaesthetics, or mapping continuity with experimental psychology, Cognitive Humanities strongly asserts that neither cognitivism nor neurophysiology are productive focuses for humanists interested in the interdisciplinary study of mind and text.

Garratt succinctly argues for the unique value of the field in his introduction (in what is actually a defense of the humanities, in general): ‘an important feature of the cognitive humanities will be looking beyond the horizons of debates already configured and regulated from within the cognitive sciences, creating new terms of reference for different types of conversations that have begun to happen and can continue liberally unfolding, as opposed to adding to what goes on already’ (4). This statement of intent attempts to directly link literary critics, cultural theorists, and theater arts scholars with the philosophers to whom they are indebted for the boosted interest in study of second generation cognitive science in the first place. Previously, in Strange Tools, philosopher Alva Noë made a similar claim about his own discipline: ‘Art has value, then, exactly as philosophy has value. Not because it produces knowledge in the way that science does. But precisely because it is the domain in which we grapple with what we already know (or think we know). It is the domain in which we try to get clear about the ways we think and respond and assign value’ (203). One wonders if the disparity between Garratt’s restatement of the function of the liberal arts and Noë’s bold claim that philosophy is art doesn’t put an undue burden on the cognitive humanities to prove itself to be more than just noise. Though this burden may reflect the experience of many working in the cognitive humanities, it suggests an image of lone exploration rather than creative production.

The most valuable essays in Cognitive Humanities do not just create new terms, but challenge the efficacy of terms and types in the first place. In ‘The Opacity of Fictional Minds’ literary theorist Marco Bernini digs into a central debate in narrative theory without burying the reader in disciplinary squabbles. Through a detailed reading of The Awakening by Kate Chopin, he inverts the now commonplace idea that fiction’s value rests in its ability to give us ‘impossible’ access to another’s cognition. Bernini points out that there is an assumption here that betrays everyday experience of mind: it is not just other minds that appear ‘opaque’ in our daily lives, but rather it is mostly the workings of our own minds that seem opaque and inaccessible, to ourselves. Thus fiction’s relationship with mindreading has less to do with the easy transparency of fictional minds represented in some literary characters and more to do with the ‘impossible’ access to others’ experiences of their own opaque mind; ‘only fiction gives access to multiple internal opacities and to the interpretative nature of cognition” (51). Bernini is able to limberly negate prior theorizations of fictional minds as well as provide a meaningful thesis for theory of mind. These results are the kind of feedback loop between disciplines that interdisciplinary work strives for.

This interaction between a scholar nominally ‘outside’ developing a meaningful theory to those ‘inside’ a field such as the cognitive sciences also conveniently mirrors the conceptual grounding of ‘4E cognition.’ The alternative theorization of cognition that Garratt defends with this collection is the idea that the mind is embodied, embedded, extended, and enacted—and defined—through encounter with the environment. It appears that the “E” that Cognitive Humanities is most interested in is the extended mind, with most essays referencing its primary philosopher, Andy Clark. Garratt introduces the collection with a new interpretation of Clark and David Chalmers’s famous thought experiment that compares two subjects who navigate from two separate locations to the Museum of Modern Art in New York City using different strategies—Inga uses memory and Otto uses personal notes. Clark and Chalmers flatten these two strategies into an example of cognition functioning similarly both ‘inside’ and ‘outside’ the mind: we recruit tools such as notebooks, maps, and writing to complete a feedback loop between our minds, bodies, and the environment. Here we have evidence of the extended mind, but Garratt wonders why ‘attention falls on Otto’s extended mind only before he enters MoMA’s stylish glass frontage […]. What would happen if we could follow Otto and Inga into the museum, as it were, and consider how the extended mind story might play out there?’ (4).

In her chapter, ‘Bayesian Bodies: The Predictive Dimension of Embodied Cognition and Culture,’ Karin Kukkonen takes us ‘into the museum,’ as it were, by tweaking Clark’s own model of predictive processing to describe the cognitive function of probability in literary reading experience. Kukkonen develops a textured look at the encounter between real-world predictions (developed through experience) and storyworld-specific predictions (modeled through familiarity with genre, character development) that suggests the general usefulness of narrative as a site to develop theoretical tools for future empirical work. In this way, Kukkonen’s theoretically rigorous chapter presents the cognitive humanities—like Garratt—as a bridge for cognitive scientists to dip into the kind of thinking humanists are trained to do. With a philosophical background in Clark and a theoretical structure in Kukkonen, the logical next step is further empirical testing of the ‘extended mind’ hypothesis.

A standout essay in the collection may not be an empirical test, but another, practical pathway for this disciplinary work to play out if cognitive scientists appear uninterested in developments by literary critics. Nicola Shaughnessy and Melissa Trimingham report on their Imagining Autism project at the University of Kent in ‘Autism in the Wild: Bridging the Gap Between Experiment and Experience.’ Their application of concepts from 4E cognition is much different from the call for future interaction with empirical work in Kukkonen or Bernini: ‘It is important to stress that the utilisation of macro-theory […] is an integral part of the continuing spiral of iterative advances in our understanding’ (195). This ‘understanding’ is given specific definition here—not just general humanist value—as they work with children with autism to create playful performances that support creative engagement with the environment. A definition of mind that is inclusive of the outside world is an opportunity to directly address the diagnostic criteria of autism, which is based on a non-typical range of linguistic, social, and affective abilities. By creating a therapy/performance environment from which Shaughnessy and Trimingham transcribe and close-read the behavior of their subjects, there is a short-circuit in the lag between theory and practice while also potentially treating and encouraging certain behaviors in their subjects. This is a unique scenario where the theory does not need to reach an interdisciplinary audience, because the need for meaningful application or testing is fulfilled by a strong belief in the theory itself: a unique approach, indeed reaching the equivalence between theory and practice/philosophy and art proposed by Noë.

The other essays in the collection are potentially equally interesting to specialists, though the organization seems somewhat haphazard. Chapters by Paavolainen, Anderson, and Seymour develop further theories of performance in the context of the cognitive sciences; Paavolainen inserts an interesting critique of deconstruction—a critical field almost altogether ignored by the cognitive humanities. The collection concludes with a survey by Matt Hayler proposing what the cognitive humanities can offer new digital work, particularly as it interfaces with emerging medical humanities research on biohacking, body modification, and posthumanism. Hayler, like Shaugnessy and Trimingham, has something other than academics on his mind. In order for the humanities to stay relevant, for Hayler, the bubble must be popped that creates the apparent wall between academic research on mind and the public’s increasing hunger to understand the mind. He is frustrated with the present circumstances, and indeed convincingly lays out how ‘these are not niche issues, but it is niche research’ (219). While Hayler’s statement is not necessarily a critique of a collection such as The Cognitive Humanities, it is a definite projection of a reader who is not just interested in the humanistic value of the issues within—or, one who has already integrated an understanding of the embodied mind—and desires to see the field evolve into a form accessible to a wider audience. The present collection does not precisely fill that desire, but it adds to the strong group of collections on cognition in the humanities that hope to prepare this future.