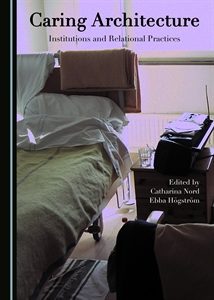 Caring Architecture: Institutions and Relational Practices is an edited collection by Catharina Nord and Ebba Högström that had its genesis in a session of the 2014 Royal Geographical Society – Institute of British Geographers (RGS-IBG) Annual International Conference that was held in London. With this in mind, it is no surprise that the papers that comprise this volume approach medical humanities from a human geography perspective, examining institutional spaces in both historical and contemporary contexts.

The overarching aim of this book is ‘to elucidate how architectural space in institutions is involved in processes of complex ordering – the kind of ordering which destabilises order, as it were – thereby hopefully contributing a more detailed and nuanced image of what it is that is happening in institutional care today’ (10). Chapters 1, 2, 3 and 6 examine various contemporary institutional spaces such as hospitals, residential facilities and assisted living for the elderly in Sweden. The first chapter by Erling Björgvinsson and Gunnar Sandin focuses on the experience of hospital patients and ‘spatial manoeuvring and norms that emerge when [these] patients negotiate and align [themselves] with the hospital’s culture’ (15). Therefore, they argue that ‘the appearance of vagueness [within these spaces] must inevitably arise, but that there are different types of vagueness.’ (34)

In the second chapter, Susanne Severinsson examines the fluctuating and stabilising aspects of an art studio/room and materiality within the context of a residential care facility for troubled teenagers, arguing that a lack of ‘structure’ within these spaces, as viewed through several lenses, such as art lessons, psychotherapy, amusement, and imprisonment, make it possible to capture mobility and flow and provide an example of a ‘paradoxical space’. Then in Chapter 3, Catherina Nord explores the essential goals of assisted living – autonomy, privacy and dignity – through an examination of its historical and architectural roots with the support of the Deleuzian/Guattarian concept of stratum. Nord argues that ‘residents’ privacy, autonomy, and dignity are negotiated in refreshingly de-territorialising processes in which architectural space is at stake.’ (80) In Chapter 6, Morgan Andersson also focuses on an assisted living facility. Andersson argues that, despite spatial limitations, the usability of the facility is in continual negotiation, conceived, perceived and lived between the environment and users in the performance of spaces, artefacts and residents.

In contrast, Chapters 4, 5 and 7 take a historical turn in their examination of asylums or mental hospitals in Scotland and mental health clinics in Sweden. Chapter 4 by Kim Ross examines the engineering of affective atmospheres within the interior of nineteenth-century Scottish asylum spaces. Ross argues that the moral, medical and hygienic discourses of the period had a profound influence on the arrangement and use of both internal and external spaces of these asylums, with the hope that these engineered spaces would affect the behaviour of these patients. In Chapter 5, Cheryl McGeachan examines the work of Scottish psychiatrist R.D. Laing who became well known for his humanist approaches to psychiatric care and was a prominent figure within the anti-psychiatry movement. The main thrust of this chapter is the complex network between spaces of care, the psychiatric encounter and the worlds of individuals experiencing mental ill health from which new subjectivities emerge, in addition to illustrating the impact Laing’s experience with the patients of the ‘rumpus room’ had on his ‘(re)configuration of psychiatric practice and the space of mental care.’ (126) Finally, in Chapter 7, Ebba Högström examines the difficulties of translating specific spatial experiences into general design recommendations through an exploration of the organisation, design, experiences and representations of Saltsjöbaden Mental Health Centre, which opened in 1975 as part of the decentralisation movement in Sweden. Högström concludes that any guidelines that are established as a result of this experiment are only stable for a short time and that ‘this way of thinking entails broader (re)presentational repertories for architects and other spatial agents working in the care industry, particularly when translating immaterialities and materialities into guidelines for future caring architecture.’ (162)

The strength and weakness of this collection is its temporal scope, in that the topics that are discussed within stretch from the Victorian period until relatively recently, which can be somewhat jarring when the collection is read from cover to cover. Since most readers will focus on the sections that are most relevant to their research, this weakness becomes less prominent. Overall it illustrates that mores – moral, medical, and political – evolve and change over time as regards all types of institutional provisions, encompassing the physical and psychological needs of patients/residents and staff. Simply put, there are more points of convergence than would be expected on the surface.