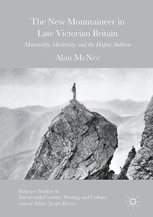 The figure of the late-Victorian mountaineer – stalwart, resolute, determinedly pursuing his ascent with ice-axe and Manila hemp rope – might at first seem an unlikely individual to be of interest to medical historians. Alan McNee’s The New Mountaineer in Late Victorian Britain, however, makes a compelling case for examining the world of fin-de-siècle mountaineering in relation to the transformative medical and scientific discoveries of the last decades of the nineteenth century. A tightly-focussed and minutely-researched work, The New Mountaineer documents the self-creation and articulation of a sporting community: the ‘New Mountaineers’ of the title, who emerged from older mountaineering traditions in response to ‘profound changes that took place in [the culture of] British mountaineering in the latter part of the nineteenth century’ (McNee, 1). While this gives the book an obvious appeal for historians of sport, McNee’s examination also encompasses the medical, bodily, and scientific dimensions of the late-Victorian mountaineer, an individual who not only embraced new technological innovations, but who also embodied: ‘a growing preoccupation with the physical basis of aesthetic sensation; a new interest in the physiology of effort and fatigue; and a characteristically Victorian drive to enumerate, codify, and classify’ (2).

The six chapters of The New Mountaineer present a detailed picture of the alpine community of the late-Victorian and Edwardian periods. McNee’s introductory chapter discusses the state of current research on the history of mountaineering, and provides a historical background to the appearance of the New Mountaineer by describing the Romantic and mid-Victorian ‘Golden Age’ of alpine ascents. Chapters 2 and 3, ‘The Rise of the New Mountaineer’ and ‘Resisting the New Mountaineer,’ describe tensions within the late-Victorian mountaineering community. Here, McNee examines the figure of the New Mountaineer, who was ‘tough, daring, and technically competent… enjoyed an athletic challenge, was enthusiastic about modernity, and saw no contradiction in using the latest equipment and techniques to help him scale summits,’ (31) alongside a conflicting strain of nostalgia for the emotional and aesthetic values of the Romantic period. Here, the New Mountaineer is presented as both a real and imaginary figure: ‘On the one hand, he represented a genuine shift in the ethos and practice of mountaineering. At the same time, he was also a product of the collective imagination of Victorian mountaineers, representing anxiety about the direction their sport was taking and nostalgia for an imagined past.’ (73) These two chapters present an intriguing insight into not only the broader ideologies of Victorian sports and sportsmanship, but also into Victorian receptions of Romanticism.

Chapter 4 will be of particular interest to researchers of medical history. Entitled ‘The Climbing Body’ it moves elegantly between a number of related fin-de-siècle physiological concepts, analysing the interplay between the sporting activities of mountaineers and contemporary investigations into nutrition, fatigue, the embodied nature of the brain, and the functioning of the senses. McNee’s discussion of the tactile experience of mountaineering (and of mountaineers’ own responses to the medical theorisation of their sport) nicely complements recent scholarship on the role of the senses in Victorian neurology and popular culture, such as Anne Stiles’s Popular Fiction and Brain Science in the Late Nineteenth Century (2011) and Kimberly Cox’s ‘The Hand and the Mind, the Man and the Monster’ (2016). The chapter concludes with an examination of the ways in which New Mountaineering writers reconstructed nominally unpleasant experiences into vital and enjoyable parts of a ‘complex of sensations’ (132) that characterised their sport. Climbers annexed ‘the chattering of teeth, fatigue, extreme cold, and precarious perches on knife-edge ridges’ into ‘a positive, confident account of the pleasures of the climbing body’ (128-130). The following chapter takes up this exploration of the role of physical sensation in Victorian mountaineering and uses it to theorise a distinct form of sublime aesthetic within New Mountaineering discourse: ‘The Haptic Sublime.’ McNee explains that: ‘The haptic sublime involves an encounter with mountain landscapes in which the human experiences close physical contact – sometimes painful and dangerous, sometimes exhilarating and satisfying, but always involving some kind of transcendent experience brought about through physical proximity to rock faces, ice walls, or snow slopes.’ (151) Taken together, these two chapters make for a genuinely compelling examination of the body, physiology, and tactile sensation in such apparently disparate areas as extreme sports and Victorian aesthetic theory.

The final chapter, ‘“Trippers” and the New Mountain Landscape,’ treats of the popularisation of mountaineering and alpine excursions in the period, as the hardy New Mountaineers found themselves beset by – from their point of view – an invasion of ‘cockney travellers’ (derisively referred to as ”Arrys’) and Thomas Cook ‘trippers’ (191). Not only does this chapter provide an excellent case-study for the history of tourism, it also shows off one of The New Mountaineer’s most consistent strengths: the in-depth and intimate nature of McNee’s research. Entries taken from hotel visitors’ books throughout the British Isles reveal the casual informality, and ‘cross-class impertinence’ (206) of both mountaineers and tourists. Seeing McNee uncover the minute details of interactions between different classes through the ‘informal and potentially anonymous genre of the visitors’ book’ (205) is a genuinely enjoyable scholarly experience. The book concludes with a brief examination of twenty-first-century mountaineering discourses, and their indebtedness to the era of the New Mountaineer.

Though most obvious in chapters 4 and 5, notions of physicality and embodiment are woven throughout the book. Time and again, McNee returns to the body of the fin-de-siècle mountaineer, his (and occasionally her) physical sensations, exertions, and material integration into the mountainous landscape. The New Mountaineer is also keenly attuned to the material culture of late-Victorian climbing, examining the changes to the design of ropes, maps, climbing gear, tents, and clothing throughout the period. Combined with its consideration of training regimens, exercise, and nutrition, what emerges from The New Mountaineer overall is a compelling account of extreme sport as a site in which technology, science, and medicine combine to adapt the human body to a hostile environment. This, in turn, gives the work a (possibly surprising but undeniable) relevance to the disciplines of posthumanism and ecocriticism.

By its own admission, The New Mountaineer examines a sporting sub-culture that was self-contained and occasionally insular. McNee writes that: ‘climbing literature in the latter part of the nineteenth century increasingly tended to speak to the community of climbers rather than to the wider reading public.’ (140) It’s to McNee’s credit then, that he largely overcomes this insularity to produce a work that allows the New Mountaineer to speak to a diverse community of scholars.