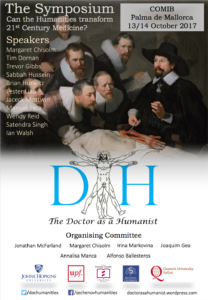 In October 2017, the first “The Doctor as a Humanist” symposium will be held in Palma de Mallorca, Spain, with the following subtitle “Can the Humanities Transform 21st Century Medicine?” The symposium will bring together experts in medical humanities from around the world (UK, Spain, Russia, India, USA, Canada) along with medical students from the different participating universities (Sechenov, Moscow, Pompeu Fabra, Barcelona, Queens Belfast and the Balearic Islands University), and will be divided into sections; including Literature and Medicine, Art and Medicine, and Music and Medicine. All aim to answer the above question. One of the main goals of the symposium, which is embedded in a wider pedagogic project, is to start up an International Association, which, among other things, wishes to develop ways to introduce the humanities into the medical curriculum and practice. Siddhartha Mukherjee in a recent book comments,

I had never expected medicine to be such a lawless, uncertain world…the profusion of facts obscured a deeper and more significant problem: the reconciliation between knowledge (certain, fixed, perfect, concrete) and clinical wisdom (uncertain, fluid, imperfect, abstract). (1)

There is no doubt that life in general, and medical practice, in particular, is becoming ever more technologically oriented; we just need to watch our children plugged into their mobile phones and computer screens to see this. In the last 100 years, medicine has progressed so much, and the medical tools available to doctors has multiplied to such an extent, that previously untreatable diseases can now be cured.

This is the miracle of the twentieth century, and this is due to medical research. And yet, it has changed the practice significantly, and has even, perhaps, altered the meaning of healthcare. As Danielle Ofri said in a recent article, “thanks to a century of staggering medical progress, we now live past 80, but evolution hasn’t caught up; the cartilage in our joints still wears down in our 40s, and we are more obese and more sedentary than we used to be, which doesn’t help.” (2)

This is a long way from Osler’s three Ps: placebo, palliation and plumbing; the days when the observation of patients and noting down of their symptoms, the famous “bedside manner”, was the only solution because there was little else to be done. Osler was the father of diagnostic technique – “listen to your patient, he is telling you the diagnosis” – and, in those days, doctors were steeped in classical education. Nowadays, machinery has all but replaced the doctor’s eye and ear, and although this has brought about a democratization of medical practice, it has also transformed the doctor-patient relationship to such an extent that perhaps there is more distance between them since before the days of Rene Laennec. Modern doctors are turning away from the stethoscope and physical examination to the MRI and CT scan. Clinical judgment has been superseded by complementary tests, so, what is the answer?
On the one hand, we strongly believe that medical progress such as genomics, stem cell and tissue engineering, 3D printing and so forth, will revolutionize medical practice even further, and no one will deny that the benefits to mankind will be extraordinary. But on the other hand, what will the cost of these benefits be? More loneliness, and mental health problems in the general population, and more demotivated and burned out health professionals?

Is there a solution?

The October symposium, and the subsequent The Doctor as a Humanist Association, will attempt to use and learn from the experiences of doctors from different countries and cultures to build strategies to cope with the uncertainty inherent at the core of medical practice. Ironically, our remedy is to look to the past, when the humanities played a critical part in medical care. Indeed, this separation of the humanities from medical education is only recent, and prompts a series of questions. When did it take place? What has it meant for medical education and care? Can we bring back what has been lost? Do the humanities still have a key role in the medical care framework of the 21st century and beyond? The Doctor as a Humanist will try to answer these questions, as we truly believe they could be the key to unlocking the medical education and practice of the future.

Time present and time past
Are both perhaps present in time future
And time future contained in time past.(3)