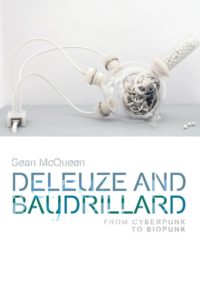 The book’s title belies its contents to some extent, given that the first half of the book does not focus on texts from cyberpunk’s ‘canon’, such as it is, but focuses on the ‘cyber-‘ aspect of cyberpunk to investigate texts that engage with the concept of control. Anthony Burgess’s A Clockwork Orange (1962) is not generally considered cyberpunk-proper in reviews of the genre, but its themes of control, and of the renegade individual fighting subjection by the state, certainly resonate with the work of figures in the cyberpunk canon such as William Gibson and Pat Cadigan. Another of McQueen’s chosen texts, JG Ballard’s novel Crash (1973), has been subject to debate about the extent to which it can be considered science fiction, let alone cyberpunk. Such deviations from the ostensible theme may be traces of the monograph’s origins as McQueen’s PhD thesis, but their reworking in this monograph is satisfying for those coming to the book for considerations of Deleuzian and Baudrillardian thought, who might consider the texts to which their philosophies are applied a secondary consideration. McQueen successfully cuts through the archaeology of decades of readings and misreadings of these two thinkers, often with a sharp word for scholars who come to the original philosophy with their own preconceptions, and hence leave it repeating unjustified or inconsistent critiques of these two thinkers. His own readings come across as fresh and new, perhaps because he works against a backdrop of scholars who have become too accustomed to invoking the names of Deleuze and Baudrillard without putting in the time to tackle their complex bodies of work first-hand.

The primary interest in the book for scholars of the medical humanities comes in the latter half, where McQueen turns to biopunk. This is a relatively new term in science fiction scholarship (following in the -punk traditions of cyberpunk, steampunk, and dieselpunk, to name but a few), but McQueen finds the term’s origins in classic science fiction, such as Mary Shelley’s Frankenstein (1818, commonly considered science fiction’s foundational text) and HG Wells’s The Island of Dr Moreau (1896). The first example of contemporary biopunk McQueen draws upon is Vincenzo Natali’s 2009 film Splice, in which a couple who work for a pharmaceutical company use DNA to create a hybrid creature.

The film draws on the tradition of Frankenstein to express fears of uncontrollable technological change, while also specifically critiquing a biocapitalism guided primarily by profit margins, rather than by philosophical or ethical considerations about the effects of its research.

McQueen’s readings of Deleuze and Baudrillard focus on some of these thinkers’ key concepts, how these have been relevant to cyberpunk and its investigation of ‘control’, and how they might function in contemporary debates about the ‘contagion’ that McQueen finds characteristic of biopunk. He contrasts Deleuze’s concept of the ‘body without organs’ with Slavoj Žižek’s ‘organs without a body’, both of which attempt to offer a representation of desire without the restrictions of hierarchy (to draw on only one valency discussed in the book). Žižek provides something of a bridge between Deleuze and Baudrillard here, as his Lacanian impulses are echoed in Baudrillard’s attempts to consider psychoanalysis, and how it might function in a society defined by the imaginary realm of consumption and consumer fetishism. Under biocapitalism, the consumption impulse could quickly move towards the point where the market’s freedom to use cells and discarded bodily tissue for profit is in tension with the long-held belief that it is immoral to profit from the cells of organs – as argued by Marlon Rachquel Moore in a recent article for BMJ Medical Humanities, “Opposed to the being of Henrietta: bioslavery, pop culture and the third life of HeLa cells”, which teases out the historical racial injustice that is now being relived, without hope of reparations, by the family of Henrietta Lacks whose ‘immortal’ cells continue to be the basis for untold profit in the biotechnology industry. The move from co-opting the labour of classes of the population under slavery, and later forms of capitalism, to co-opting the use-value of the body itself is the journey with which McQueen engages here as he moves from readings of Karl Čapek’s R.U.R. (Rossum’s Universal Robots) (1921), the science fiction play that brought the word ‘robot’ into English usage, and Eric Garcia’s The Repossession Mambo (2009, filmed in 2010 as Repo Men) which sees a biounderclass fitted out with artificial organs and forced to pay crippling interest rates or face having their organs repossessed – and dying in the process.

The electronic copy of this book, from which I reviewed, leaves something to be desired. Like many academic books, it uses endnotes which cannot be easily referenced as one reads in the electronic form, and the book’s use of abbreviations for the major works of Deleuze and Baudrillard exacerbate this problem as the reference list at the beginning of the book cannot be easily consulted. This makes for particular difficulties when quotes from the major texts are picked out as introductory to chapters and their sections, leaving the reader occasionally unsure as to which of the theorists is being quoted. However, the content of the book ultimately extends the case for considering biopunk as a unique and important subgenre of science fiction that, in turn, deals with the unique and important development of biocapitalism. McQueen’s readings of Baudrillard and Deleuze manage to scrape away some of the sedimented assumptions and misreadings of the past and offer exciting new ways to consider their work. His reference to both major and minor texts from both thinkers will introduce readers to insights they had not previously considered – again, especially relevant to students of the medical humanities might be Baudrillard’s comparison between cancer and capitalism in The Transparency of Evil (1990), the biopolitics of organ transplantation in Kazuo Ishiguro’s Never Let Me Go (2005), or Thierry Bardini’s account of subjectivity after bioengineering, Junkware, which McQueen turns to in his final chapter reading of Brandon Cronenberg’s Antiviral (2012).

As I pointed out above, McQueen’s book does not always stick to the limits laid out in his title, (for example when he reads texts that are not considered archetypically ‘cyberpunk’ under that rubric, or in the latter half of the monograph where Foucault’s thought is just as crucial to his argument as that of either Deleuze or Baudrillard), and his book should come with a warning for those who have never tackled Deleuze or Baudrillard before, given the slew of concepts that are not fully unpacked here for beginners. However, the book that emerges is cohesive and amounts to an often passionate argument for considering class consciousness in the era of bioengineering, biohacking, and biopolitics.