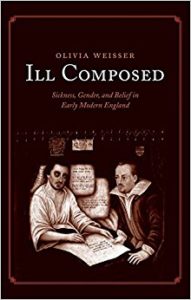 In this well-researched and compelling work, Olivia Weisser addresses the relative paucity of scholarship on early modern gender and illness to argue that early modern experiences of illness were mediated by factors such as gender, religious belief, occupation, economic status, and contemporary writing practices. To analyse these influences, Weisser reclaims the perspectives of early modern patients, ultimately demonstrating how self-expression defined medical care, as well as highlighting the performative aspects of their ailments. Her study relies on a diverse array of sources spanning from 1630 to 1730: diaries, letters, account books, medical literature, devotional literature, practitioner case notes, and petitions. While the fifty-two historical narratives (penned by thirty men and twenty-two women) are representative of a wealthy and literate minority, they present a diversity of age, political affiliation, and religious membership. Weisser further expands her source material by analysing petitions submitted by poverty-stricken individuals during their times of illness.

Through these texts, Weisser reveals the ways in which emotion, conventions of suffering, and articulations of pain influenced sufferers’ perspectives of their health. Crucially, Weisser contends that seventeenth-century English men and women perceived illness in gendered ways: while women often attributed illness and recovery to positive or negative affective relations, men demonstrated a tendency to privilege their own experiences and observations over the opinions of others. Ill Composed therefore addresses several imbalances in previous scholarship regarding illness in the seventeenth century. Although prior studies of early modern patients in England have focused almost exclusively on the extant diaries of Puritans, Weisser draws on the writings of Anglicans, Quakers, and Catholics to present a more theologically balanced landscape of illness. Weisser also deviates from previous scholarship by asserting the role of the emotions in illness – both pathogenic and curative – and abandoning typical discussions of pain management to instead consider how pain was expressed.  Following Joan Scott, Weisser does not consider these first-hand accounts to be unmediated reflections of experience, instead analysing the role of writing in constructing experiences of illness. By scrutinizing the normative writing practices of the period, she illuminates how gender mediated the space between lived experience and documentation.

Weisser begins her study with a chapter unpacking patients’ understanding of their bodies from a (gendered) humoral framework, and the remaining chapters trace the progression of illness. “Learning How to Be Ill” treats the scripts employed by patients to make sense of their infirmities, specifically those derived from observing the suffering of others, interpreting their own bodily functions, and engaging devotional literature. Weisser demonstrates that religious writings such as the Confessions provided templates for considering the physical and moral effects of temptation; Augustine’s story of the stolen pears transformed early modern experiences of fruit-related sickness into opportunities for religious reflection. As the book progresses, the gendered aspects of early modern illness become increasingly clear. In “Emotional Causes of Illness,” Weisser argues that women were likely to causally link their ill health to negative emotions. For instance, Alice Thornton reported ill health immediately following the death of her siblings, and on the night of her husband’s death Mary Rich wrote, “this night with griefe I fond my self uery ill.” Sickness could not only arise as a response to grief, but also in sympathy with the sufferings of a loved one or as a deleterious effect of gossip. In contrast, relatively few men reported a direct relationship between their passions and the state of their health. Samuel Pepys, when consumed with jealousy for the affections of his wife, described the toll on his health in terms of “troubled” sleep and mind, refusing a direct link between emotion and illness. As Weisser argues, men were more inclined to focus on the physical processes underlying their bodily states, or present their ill health alongside professional or financial concerns.

“Suffering on the Sickbed” examines the behavioural expectations of “the sick role” as well as the effects of visitors; early modern illness was enacted in a community framework, rendering visits to the sick both a social responsibility and religious exercise. “Perceptions of Pain” discusses how patients evaluated their pain, as well as the ways in which religious narratives of suffering – notably, those of Catholic martyrs and Christ himself – transformed the experiences of the pious. Men and women not only used martyrdom as a metaphor for their pain, but also utilized the discourse of martyrdom in mimetic ways. For example, the tortuous image of the rack was both utilized as a metaphor to highlight the spiritual significance of suffering and employed to articulate severe pain. Importantly, Weisser notes the challenge pain posed for normative gendered behaviour: women’s assertive expressions of pain often defied the normative feminine qualities of patience and submission; men characterized the severity of their discomfort by recording their inability to meet expected masculine roles of economic and occupational import. The final chapter, by discussing the petitions of those afflicted by both physical and financial debility, examines the socio-economic impact of illness. Weisser identifies several key differences of these illness narratives, namely an increased emphasis on misfortune, physically debilitating disorders, and the economic toll of illness. Throughout the book, Weisser discusses afflictions that are not sex-specific; by not stressing the bodily explanations of one sex over the other, the gendered aspects of illness are clearly rendered.

Ill Composed presents Weisser’s contribution to three broader fields: historical considerations of the patient, women’s and gender history, and studies of constructions of the self. Ray Porter, Dorothy Porter, Lucinda Beier and others have previously investigated the early modern patients’ participation in the medical encounter, especially in light of the decline of patient authority experienced in the 19th century. Weisser expands this work by demonstrating the influence of both gender and religion on early modern utterances of illness. While Barbara Duden has previously established “the body” as a historical subject, her attention remains on only female patients; Weisser addresses this gap by noting the gendered similarities and differences in seventeenth-century expressions of illness. Similarly, while Laura Gowing and Mary Fissell have explored early modern conceptions of the body, Weisser offers a novel approach by utilizing illness to explore the relationship between culture and embodied experience. This work advances these fields by depicting the early modern sick body as locus of self-expression; the constructive potential of this rhetorical space is heightened by the (religious) anxiety and reflection surrounding illness. Weisser demonstrates that these self-constructions occurred in ways that both affirmed and defied normative gendered behaviour. Overall, Ill Composed presents a revelatory study of the body as a product of its cultural and historical moment, providing crucial insight into the historical experience of illness and inviting scrutiny of the practices surrounding illness today.