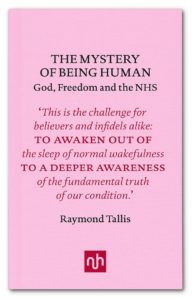 Raymond Tallis, The Mystery of Being Human: God, Freedom and the NHS. Notting Hill Editions, 2016.

This collection of essays – lucid, varied, compelling – is by retired academic geriatrician and neuroscientist Professor Raymond Tallis. A man who may truly be called a polymath, he is not the sort to skulk in a library and never publish anything until it is so perfectly honed that all the life is drained out of his thoughts. Tallis has written and published widely on subjects as diverse as post-structuralism (a critique), artificial intelligence, and the importance of philosophy (defending it against attacks from Stephen Hawking), including a book on Parmenides, a pre-socratic philosopher of whose written work only minute fragments survive.

There are six essays in this beautifully bound edition which, complete with page marker and linen cover, is a pleasure to handle as well as to read. The  subjects of this book, true to form, range widely, thus fulfilling the promise of its subtitle ‘God, Freedom and the NHS.’

In the preface, Tallis defends the brevity and compression of the essay, a form rare in the modern written media, except perhaps the London Review of Books or The New Yorker. He describes the essay as ‘a mind-portable form’, implying that it fits well with the interrupted nature of most people’s attention to their reading. Tallis believes that the essay is the best vehicle to express his well established humanism, self-defined as ‘secular humanism’, and his preferred philosophical stance on life, death and humanity since his teenage years.

Tallis defines this book as mainly a philosophical treatise, whilst he accepts, as I see it, that many will find his essay on the privatisation of the health service political. It is a most heartfelt essay, concerned with the tragic dismantling of the NHS by a ‘cynically corrupt political class.’ The book itself is dedicated to members of Stockport NHS Watch, with whom Tallis was moved to leave the library and to protest in the streets, and experience that he found difficult yet exhilarating.

In Lord Howe’s Wicked Dream, also the longest essay in the book, Tallis excoriates successive Secretaries of State for Health, saving his strongest contempt for Jeremy Hunt. In the short time since this book was published, there have been the strongest signals yet that the service is crumbling away under strains (ageing population with multi-morbidities and little attention to preventative health maintenance) that have been obvious albeit ignored for decades, and those heaped on the NHS by whatever the political equivalent of iatrogenic illness is: Hunt, for example, ramping up individuals’ expectations of what they should demand of the health service, demeaning those who work for it, reducing funding in real terms, and bringing in private companies to profit from the easy work. The Health Service is the most obvious example of the widening gulf between political rhetoric and lived reality, and illustrates the crude attempts to bring critics of (successive) government’s health policy into disrepute. Tallis’s essay is a powerful cri de coeur marred only, in my eyes, by the use of the term ‘swivel-eyed’ which always conjures up the clever, arrogant sixth former to me. It is now a hackneyed phrase which should be jettisoned. Otherwise, all too plainly, what Tallis has predicted is clearly coming to pass and his systematic destruction of the ‘alternative facts’ peddled by the government is cogent and impressive. It is wonderful that so many people give so many examples of still excellent, humane care in spite of the strains. Mid-Staffs remains a terrible example of what can happen when the wrong incentives narrow targets and ‘punishments’ are applied.

The current mayhem in the NHS and the political reactions on all sides impede any chance of looking constructively at how a ‘free at the point of service’ can be maintained. It is clear that we need also to convince people of the value and impact of looking after themselves by behaving differently and valuing what health they have, as well as looking at taxation. We also need someone in charge at the Department of Health who is interested enough in the Health service, and broad-minded enough to listen,  to understand what the work entails. Jeremy Hunt’s complete ignorance of what the reality of junior doctors’ lives are like, as well as his readiness to misuse statistics, has caused a huge mound of distrust to build between the Department of Health and the clinicians who work within the NHS.

Other essays in the book are more clearly philosophical. Tallis alerts us in the preface that a ‘philosophical novice’ might find his essays ‘demanding’. (Reader, I admit that I did). He has a deep, long-standing interest in time and the need to  ‘engage with physics and…rescue time from its jaws’. He feels that time is far too complicated to be left to those who reduce it to a set of numbers.

Unlike Professor Dawkins, Professor Tallis wants to engage, rather than belittle, those with religious or spiritual beliefs. In a wonderful essay, God and Eternity for Infidels, he concludes that that ‘the challenge of humanism is to retain a numinous sensibility without the continuing support of the idea of God or churches.’ In an equally enjoyable and thoughtful essay sparked by an everyday event On Being Thanked by a Paper Bag, Tallis considers the complexity of human consciousness.

In summary, this is a book that will provoke thought and new ideas in the reader – or at the very least a new way of seeing and thinking about many aspects of our lives. Reading it, you will also probably want to read more of what this thoughtful and humane thinker has to say.