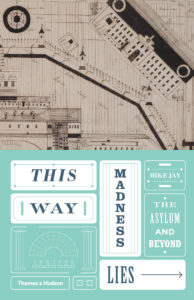 This Way Madness Lies. Madness and Beyond. By Mike Jay. London: Thames and Hudson, 2016.

Published to accompany the recent Wellcome Collection Exhibition, ‘Bedlam: the asylum and beyond’, this book is packed with over 600 photographs and illustrations drawn from the archives of institutions in Europe and America, as well as with art work by patients from a wide range of different eras and locations. The book is, itself, an ‘object’ and deserving of close study. At first sight, it seems a marvellous exhibit. Crammed with images from a bewildering variety of sources, it entices the viewer and, perhaps intentionally, disorients them with the clash of visual material. There are countless black and white photographs of asylum inmates, architectural plans of institutions, portrayals of psychiatric treatments such as the strait-jacket, lobotomy and malarial therapy, magazine advertisements for medication, cinema posters of asylum horror movies, anti-psychiatry placards, and a selection of art by well-known artists such as Hieronymus Bosch and Theodore Gericault, as well as celebrated patient-artists like Richard Dadd, Louis Wain and Adolf Wolfli. The organisers of the project have been able to mine a very rich seam of archival material and, possibly, they have been loath to exclude any of it from the book. The result is that while there are numerous large colour reproductions, there are also too many pages where multiple images have been crammed onto the one page. For example, page 16 has fifteen small black and white images of scenes from the story of Bethlem Hospital. The pictures are simply too minute and poorly defined to be properly viewed and appreciated. This is the fate of many other images which are bundled together onto the one page. This is frustrating because from what one can make out of the pictures, they are full of historical and aesthetic interest.

A more serious concern is that of the ethical questions raised by showing photographs and images of patients, often in distressed and degrading conditions. Should such images be shown? The men and women featured were not able to give consent. Should their only appearance on the historical record be that of their time as an asylum inmate with no reference to other aspects of their life such as, for example, being in a relationship, being a parent, or having an occupation? If the photographs are displayed, should the patients be identified by name or should they remain anonymous? Does anonymity serve to protect the identity of the patient or to make them even more of an ‘object’, lacking individuality?  Are some images too demeaning and disrespectful to the subject to be exhibited? These are difficult ethical questions which have provoked discussion amongst fine art commentators, historians and psychiatrists: they are no easy answers. Nowhere in the book is there a discussion of these vexed issues or even an acknowledgment that the presentation of this material may be problematic. Further, these images and photographs of patients were created for a variety of purposes. Some clinicians, such Sir Alexander Morison wanted to delineate what he saw as the particular ‘physiognomy’ of different types of mental conditions and paid professional artists to accompany him to asylums to make sketches of selected inmates. Charcot sought to capture the apparently spontaneous ‘hysterical’ behaviour of his patients at the Salpetriere, but research suggests patients adopted the poses expected of them. Other photographs of patients participating in the activities of the asylum were meant to advertise the benefits of the institution. Again, apart from the accompanying captions, there is little discussion of this or the particular context in which each image was commissioned.

One is reminded of the well-known episode in the history of Bethlem Hospital, or ‘Bedlam’ as it came to be known, where the general public were allowed to visit the asylum to view the inmates. Some saw it as educational, whilst others saw it as entertainment and a source of titillation. This practice was eventually stopped in 1770, but one is left with the uneasy feeling that this book in some ways represents a modern version of visiting Bedlam. At least the 18th century inmates were able to engage with the public and give an account of themselves. Here the patients, frozen in images and photographs – ‘mute inglorious’ –  have no means of putting forward their side of the story.

The writer, Mike Jay provides the text of the book. Generally he provides a balanced and readable account of this contentious area. Neither telling a tale of benign progress, nor, contrastingly, a catalogue of the disasters inflicted on the mentally ill by the supposedly-evil empire of psychiatry, Jay prefers to see the history of psychiatry in terms of a pendulum swinging between psychological and physical approaches to madness, and between institutional and community responses. He is thus able to see the good and bad in different periods. He is less inclined than Andrew Scull, whose recent volume, Madness in Civilisation he cites approvingly, to perceive the undoubted abuses and wrong-turnings of psychiatry in terms of wicked and self-serving clinicians, and more as a result of their misguided intentions and the sheer complexity of mental illness.

The book is divided into sections: the 18th century madhouse; the 19th century lunatic asylum; the 20th century mental hospital; and ‘beyond the asylum’. At the centre of the narrative is the story of Bethlem and its founding in the thirteenth century, which Jay goes on to trace through its evolution as a madhouse, an asylum and, finally, a modern day hospital. As Jay is well aware, Bedlam, or rather the mythology of Bedlam, has long been part of our folk-lore and culture. John Webster, Jonathan Swift and William Hogarth all depicted the institution. Jay is good on cultural representations of Bethlem and points out that, from an early stage, these portrayals bore little resemblance to the actual hospital. He mentions famous Bethlem residents such as James Tilly Matthews who drew up a visionary architectural plan for the new Bethlem which uncannily anticipated the building that was eventually created. He mentions, too, Richard Dadd, the parricide, whose strange and highly detailed paintings were, arguably, more striking than the works he created before his incarceration.

Jay also takes in developments in the rest of Britain, as well as in Europe and America. He charts the failure of the 19th century asylum which became over-crowded with incurable patients, the development in the 20th century of the mental hospital with its hope that physical treatments would return patients to their homes, and community approaches in our own time which have been ham-strung by a lack of funding. He examines the rise of pharmacology and alternative therapies. As in previous times, a variety of therapies crowd the market-place.  Jay places a particular emphasis on the story of Geel, the Belgian town where for many centuries patients have lived with local families and worked in the community. Jay sees this example as the way forward in our post asylum world.

A recurring trope in Jay’s account of the history of madness is that the world is one vast Bedlam.  He quotes the campaigner, Thomas Tryon observing in 1689: ‘The world has become a great Bedlam, where those who are more mad lock up those who are less’. (p. 52) The 19th century alienist, Dr John Conolly greatly extended the list of those he felt would benefit from asylum care. As Jay wryly observes: ‘The logic of the perfect asylum, taken to its logical conclusion, was that the entire world should become one.’ (p. 120) At the beginning of the 20th century, Jay argues,  madness seemed to have escaped the asylum and taken root in the culture at large as an entire generation was slaughtered in the insanity of the First World War. He concludes, somewhat provocatively:  ‘In the wake of the asylum, the world has become a great Bedlam’. (p. 218) Whether or not one agrees with this, it does serve to emphasise that the difference between sanity and insanity is perhaps not as marked as we would like to imagine.

The book, then, is a mixed achievement. The images veer between the stunning and the indistinct, and there is a curious lack of an ethical context to them. However, Mike Jay’s text is, in the main, even-handed, and for those new to the field, an accessible and well-written introduction to the history of psychiatry and madness.