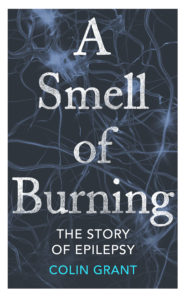 A Smell of Burning

Colin Grant’s A Smell of Burning conveys a powerful message: being diagnosed with epilepsy means being associated with an intricate and captivating cultural history. Patients and families are connected to centuries of prejudice, transcendental explanations, scientific, as well as social, experiments, and works of art. Grant wrote this book as an elegy to his younger brother Christopher, who died of SUDEP (Sudden Unexpected Death in Epilepsy) in 2008; he, thus, joined David B. and William Fiennes, who in Epileptic (1996 – 2003) and The Music Room (2009) respectively, explore the impact of epilepsy in their brothers and in their families at large. It is, indeed, endearing to find resonances between these accounts, despite their different familial backgrounds and the different medical support available in each case. When Grant admits in his introduction that he “often wandered where Christopher went in those moments” (p. X), we are reminded of the many, imaginative spatial metaphors, beautifully rendered in the woodcut style of David B.’s drawings: for example, the original French title of his graphic memoir, L’Ascension du Haut Mal, reconfigures epilepsy as a disproportionately high mountain the two brothers attempt to climb throughout the book. But time is equally important in grasping the multifaceted concept of epilepsy: Grant learns in medical school that “the answer to your patient’s present condition lies in the past” (p. 2), which gives way to his retracing of the past of epilepsy in the book, interwoven with recollections of his brother, in a blending of medical history and biography, reminiscent of the more conscious pastiche technique used by Fiennes in The Music Room. Grant’s medical training, in actual fact, adds some intriguing nuancing to this shared plotline, as for example when he confesses his fascination, mixed with revulsion, in witnessing one of his patients having a tonic clonic seizure.

The interplay of spatial and temporal dimensions in making sense of epilepsy, despite its inherent ineffability, provides the basis for a secret language between the two brothers: coded expressions, such as “you had a visitor” (p. 68) or being “not in Kansas anymore” (p. 157), are genuinely tender glimpses into the reality of living with epilepsy. These enlightening, heartfelt snapshots into Christopher’s life are, unfortunately, almost obfuscated by the plethora of wide-ranging vignettes of famous people associated with epilepsy, from Julius Caesar to Neil Young. The limits of retrospective diagnosis and the problems of glorifying rhetorical catalogues of outstanding patients are well-known: it is, then, uplifting to learn that Christopher himself “was not comforted by the roll call of famous historical figures that were thought to have had epilepsy” (p. 22), though the permanence of these tropes in the book remains disorienting.

The tension between a more public, maybe even political, facet of epilepsy and its more intimate manifestations is palpable throughout the text: Grant moves among milestones in the history of epilepsy understanding and treatment, in search of an overarching meaning, which could probably give him (and his readers) a privileged access into Christopher’s brain and mind, into his mysterious unconscious peregrinations, as well as into his more conscious decisions, such as, for example, his intermittent adherence to his anti-epileptic drug regime. Each chapter in the book relies on these connections between the macro and micro dimensions of epilepsy, sometimes resulting in a slightly skewed perspective: by means of an example, Grant’s reading of “the fragility of Myshkin’s epileptic body to mirror the underlying fissures of Russian society” (p. 56) paradoxically detracts from Dostoevsky’s pioneering subjective contribution to the narrative use of epilepsy.

There are, indeed, a few underdeveloped points in A Smell of Burning that call for a more conscientious elaboration. Seizures are constantly described with reference to the old-fashioned vocabulary of grand mal and petit mal, possibly in the attempt to conjure up well-known social perceptions of epilepsy; yet, the downside of preventing the circulation of the more up-to-date and sophisticated medical terminology is not contemplated. Along similar lines, Grant brings in the testimony of writer M., who defines himself as “epileptic” (p. 204 and 210) to signify how pervasive and disempowering his condition is. Accordingly, Grant describes people with epilepsy as “epileptics” throughout his book, but never discusses in detail why some patients may feel uncomfortable with this label. A good example of this different view comes from Lily O’Connor, the protagonist of the 2014 film Electricity, which Grant briefly mentions as a recent creative attempt to represent epilepsy, for instance, through “swirling spectral lights” (p. 59). Yet, it is arguably in Ray Robinson’s 2006 experimental novel by the same title, on which the film is based, that we can find extensive discussion of discriminating labelling, as well as ground-breaking visual renditions of seizures on the page, thanks to the use of jumbled typeface or blank pages.

Unsurprisingly, it is Christopher himself, who provides the most compelling attempts to comprehend epilepsy in A Smell of Burning. When he calls his seizures “thingamajigs” (p. 160), he perfectly captures their uncertain nature, as well as maybe his own difficulty in absorbing obscure medical terminology. Similarly, in a very imaginative way, he introduces his GP to the Native American concept of Konyaanisqatsi (p. 165), life out of balance, to explain how his drugs made him feel in disharmony with nature. Christopher learned this concept from Godfrey Reggio’s experimental 1982 film on contemporary American landscapes and was planning to create his own filmic response to it, perhaps an analogous timelapse footage of the wanderings of an “epileptic mind” (p. 203). We are sadly never going to watch this promising film project, but thanks to A Smell of Burning we are encouraged to put into question our own perceptions of what constitutes balance and harmony, in our brains, our minds, and the world around us.