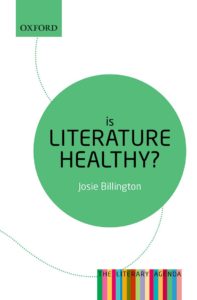 Many years ago, I blagged a ticket to an invitation-only symposium on the subject of medicine and narrative, held under the auspices of what was then the Arts and Humanities Research Board. The premise of the meeting was that humanities academics were sitting on a goldmine – something called narrative – but were too high-minded or obtuse to rate it at its true worth. There were a few big names in attendance but the star turn was a researcher from the hospital soap, Holby City. Here was someone who knew how to link medicine and narrative in a way millions approved of, on an almost weekly basis. We were also invited to read Jed Mercurio’s novel, Bodies, which was being adapted for television but hadn’t yet been broadcast. The organisers hoped that by studying ‘hard-hitting’ narratives of healthcare from a variety of disciplinary perspectives, we might stumble upon facts concerning medicine, or healthcare, that had eluded observation by other means. It was never explained why narrative would be better at picking these things up than other kinds of investigation. It was assumed that narrative was a good in its own right and that we would all find ways of making common cause through it. Needless to say, we didn’t. It was clear that narrative was as vexed a term as ‘literature’ and even though we were focusing on fictional texts some of those present – including your reviewer – felt that what would be found would depend on the quality of the sources. Rubbish in, rubbish out. The idea that narrative, merely by being narrative, would yield up untold secrets was a piece of magical thinking.

Josie Billington’s Is Literature Healthy, is, among other things, a compendium of everything I wish I’d said that day. Billington is a literary scholar who works at Liverpool University’s Centre for Research into Reading, Literature and Society (CRILS). Her book is a plea for literary reading but she starts from a premise that is seldom aired at meetings of literary scholars or medical humanists: that our culture has lost its literary edge. We no longer have an adequate metric for valuing literature because we have forgotten what makes literary experience distinctive. We think it has to do with narrative. For Billington, the problem isn’t that literature is missing from medical syllabuses or even university literature departments (though even there, it is missing). It is missing from life.

Chapter 1, ‘Healthy and Unhealthy Thoughts’, introduces the reader to the ideas of the British psychoanalyst Wilfred Ruprecht Bion (1897-1979), as set out in four fiendishly difficult works published between 1962 and 1970. Bion believed we have an inherited propensity to distance ourselves from meaning because it disturbs our mental balance. To become attuned to meaning we have to be willing to acknowledge the extent of what we do not know. We have to acknowledge our dependence on others. We also have to submit to experiences whose outcomes may be very threatening. Bion traces the development of our capacity to bear meaning to early infancy. If our anxieties have been ‘contained’ by a mother, say, we can set aside some of their physical impact and face them as mental entities. In this form they are not necessarily rational. They may appear as shards of thought disconnected from the rest of what goes on in our mind or as dream images; or they may exist as unconscious phantasies. Bion gives the name ‘alpha function’ to the process by which the psychobiological sources of anxiety are converted into forms of mental life of this way. He thought it was a lifelong process. Now most humanists, like most scientists, treat this zone of our lives with polite disdain. But Billington argues—very persuasively, in my view—that literary reading is profoundly enmeshed with alpha function. When a piece of literature moves us deeply, it is because it resonates with something in our history that carried a great weight of anxiety when we experienced it the first time around. The work of reading allows us to continue the processes by which we came to terms with it or failed to do so. If we feel more alive, it is because the most primitive stakes in our existence have been thrown into relief. An analogy from biology suggests itself. It used to be thought that DNA that didn’t code for a protein – i.e., at least 95 per cent of human DNA – was ‘junk’. We now know that so-called junk DNA provides the instruction manual for turning genes on and off.

It requires something like Bion’s alpha function to follow a character like Dorothea Brooke or Anna Karenina through their confusion. We must attune ourselves to their mental states, make these our own, before we can do anything with them. Literary reading begins when we strive to catch the primitive edge of experience which is a literary text’s true growing point. In Billington’s words, ‘the experience must not be used—only let be, in its words… a book can have thoughts that humans cannot have’ (44). In a reading designed to be provocative to medical humanists of Tolstoy’s The Death of Ivan Ilyich, Billington praises not the butler’s assistant Gerassim’s empathic witnessing of his master’s sufferings (the standard Med Hums reading), but Tolstoy’s depiction of what it is like to live completely beyond the reach of human care. I loved it.

The second chapter, ‘Telling a New Story’, does three things. It offers a broadly-brushed but incisive critique of narrative medicine. It explains why literature is not coterminous with narrative. And finally, with an eye to Billington’s own practice at CRILS, it explains why healthcare interventions that seek to use literature must go beyond narrative. Billington is fully alive to the humanistic aspirations underpinning narrative-based medicine. In particular she recognizes and approves of its concern to treat ‘the whole person’ and to vouchsafe patients a voice in any therapeutic process. But in cases of depression, for example, she thinks the whole person is absent to himself or herself. To be depressed often means not to have a story. The hero of this chapter is another psychoanalyst, Michael Balint (1896-1970), Sándor Ferenczi’s great pupil and literary executor. Balint is remembered in this country as the founder of ‘Balint groups’ which were designed to help GPs listen psychoanalytically to their patients’ complaints. Billington appears to think that the best kind of general practice will do just this. A good doctor, like a good literary reader, will know how to bear with his patient’s confusion and not substitute his own understanding for it prematurely. The limits of narrative-based medicine stem from its obsession with immediately-measurable variables and its conviction that story per se is empowering. It will often be easy for a clinician to give a narrative shape to their own or other people’s lives. It will not always go very deep. At this point, Billington appeals to what was once a commonplace of literary criticism. At the heart of poetic experience is something that lies beyond words. By virtue of its preoccupation with the ineffable parts of human experience, the parts whose importance we barely know how to articulate, the zone of Bion’s alpha function, the nineteenth-century realist novel is in fact a mode of poetry. It is only superficially a narrative form. Its power to move us is patterned after our experiences of poetry and the chapter concludes with a description of participants in reading groups run by Billington finding their own deepest selves mirrored in verse by, among others, Ben Jonson and Elizabeth Barrett Browning.

The third chapter, ‘Reading in Practice’ describes Billington’s work with her colleagues at CRILS and The Reader using reading aloud as a therapeutic intervention with patients with depression and chronic pain. The meetings were video-recorded and individual reactions noted. Billington is at pains to say that this intervention has nothing to do with bibliotherapy, where readings are often matched to conditions. The assumption is that the sufferer will be ‘found’ by the text ‘in a deep sense and at a deep level’ (105). It is his or her ‘inner life’ that she and her colleagues wish to engage. They believe it has a therapeutic effect arising from the ‘something deeper’ that literary reading provides. I think the time has come to test this claim experimentally. The final chapter puts forward an exemplary reading of John Berger’s masterpiece, A Fortunate Man, though, pace Billington, I think that book owes more to Marx than to Balint.

Underpinning this entire book is a compelling theory of literary reading which could be made more explicit. If I had to summarise it, it would go something like this. The reader of a great literary work such as Middlemarch gets to experience the process of containing the vicissitudes of Dorothea’s fate by rehearsing George Eliot’s words as if they were his or her own, allowing them ‘to be’, without attempting to put a construction on them, and simultaneously of being contained by the total process of getting through the book. It is this doubleness at the heart of literary experience that makes perseverance so rewarding. It is only superficially the same as telling a story or piecing one together. It is being acted upon by means of a story. A Kleinian, such as Bion once was, might see it as a benign species of projective identification. But all sorts of lexicons can capture it.

The medical humanities have become more complex and more theoretically savvy over the years. But we desperately need more books like Billington’s that address us quietly and clearly, about something very basic. Literature and the literary have lost their cachet in our field. If you want to know why it should be restored, read this book. The case could not be better made.