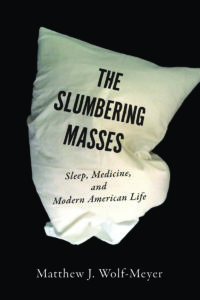 Need a quick recharge? Power up with a power nap. Geniuses like Dali and Einstein loved sneaking in some extra ZZZs.

Opening up my Mozilla Firefox web browser, a cartoon Albert Einstein greets me with this friendly message. Albert’s suggestion – one of a rotation of quirky, entertaining factoids on the Firefox homepage – is indicative of a particularly modern attitude towards sleep. The examples of Dali and Einstein, it implies, show that sleep is not just a period of repose, but something that can – and should – be organised in constructive ways. More than simply providing a break from work or play, sleep can be used to ‘power up’ the sleeper, so that they might make the best and most productive use of their waking hours.

In The Slumbering Masses, anthropologist Matthew J. Wolf-Meyer traces the origins and implications of this and other of our contemporary notions of sleep, charting in particular the rise of sleep medicine in the twentieth century. The book is resolutely interdisciplinary, combining archival research with ethnographic fieldwork in sleep clinics and support groups, as well as numerous interviews with doctors, patients, and their family members. While Wolf-Meyer’s focus is limited to the United States, much of his argument can be applied across the Western industrialised world. The way we sleep, he argues – and the way we think about sleep, both medically and culturally – is the product of a particular combination of historical and social forces, largely coming into play from the late nineteenth century.

While we tend to think of sleep as a natural fact – a human constant across cultures and time periods – recent scholarship has uncovered a rich, and often surprising, history and sociology of sleep. In his 2001 article ‘Sleep We Have Lost’ – expanded in his 2005 book At Day’s Close – historian A. Roger Ekirch revealed that, before the advent of industrialisation, most people in Europe did not sleep in one consolidated period overnight, but more usually in a segmented or ‘biphasic’ pattern of ‘first’ and ‘second’ sleeps, interrupted by a period of wakefulness.

Our conceptions of ‘normal’ sleep provide Wolf-Meyer’s starting point for The Slumbering Masses. How, he asks, have we come to view eight hours of sleep – consolidated, motionless, solitary or with an intimate partner, in a room set aside for the purpose – as, if not an inviolable norm, at the very least the standard to which we must all aspire? Like Ekirch, Wolf-Meyer apportions a large degree of responsibility to industrialisation, and – more broadly – to a particular set of discourses associated with the rise of capitalism. With a nod to Max Weber, Wolf-Meyer devotes a chapter to ‘The Protestant Origins of American Sleep’. Early protestants’ commitment to worldly industriousness, the argument goes, generated a view of sleep as the enemy of productivity. A whistle-stop tour through more than three centuries of American protestant thought uncovers repeated characterisations of sleep as temptation, distraction, or waste of time. In 1690, the Massachusetts preacher Cotton Mather warns his readers that the devil lays ‘his most fatal snares … on the bed, where it is lawful for us to sleep’ (54). A century later, Benjamin Franklin admonishes his elite Parisian friends for their irregular hours, advising a strict routine of four-in-the-morning starts.

The advent of industrialisation and the factory system, with the concomitant requirement to regulate and coordinate large numbers of bodies, saw the question of sleep become a biopolitical problem. It was not the ‘lone sleeper’ but the ‘slumbering masses’ that became the subject of concern and regulation. In the nineteenth and twentieth centuries, Wolf-Meyer argues, ‘normal’ sleep became defined in relation to the spatial and temporal rhythms of industrial capitalism, centred on the working day and the working week. It was increasingly assumed that workers would build up fatigue during the day or over the week, enabling them to sleep for a solid period each night before returning to the factory ready for work. Against this background, alternative forms of sleep became pathologised as ‘sleep disorders’. In this context, the rise of sleep medicine in the twentieth century can be seen as a form of discipline, directed at aligning our bodies with the spatiotemporal demands of industrial society.

The four central sleep disorders discussed in The Slumbering Masses are sleep apnea, insomnia, parasomnias (such as somnambulism, night-terrors, sleep sex, and sleep eating), and narcolepsy. Each of these, Wolf-Meyer argues, is, in their own way, a disorder of time and of space, and a disorder of social life. The body does not sleep when and where it should. Sleep medicine attempts to realign individual’s bodies with the spatiotemporal rhythms of society through therapeutic interventions: behavioural, prosthetic, or pharmaceutical. Its model of treatment is not curative, but regulative, requiring the patient to submit to a regular and ongoing regime of closely monitored, chemically-controlled, or prosthetically-enhanced sleep and wakefulness. Those people who suffer from sleep apnea should visit the nearest sleep apnea center for treatment.

‘An overlooked aspect of biopower’, Wolf-Meyer writes, ‘is the construction of the inevitable over and above its usual insistence on the production of the normal’ (155). The production of knowledge about bodies is concerned not only with what the body should do, but with what the body, by definition, must do: the limits and flexibilities of its behaviours, rhythms and potentials. Disordered sleepers, Wolf-Meyer argues, threaten our expectations about the body’s inevitabilities. Their stubborn refusal to align their bodies with the social demands placed upon them, disturb the very spatiotemporal order of capitalist modernity.

While some cultural critics (prominently Jonathan Crary in his 2013 book 24/7: Late Capitalism and the Ends of Sleep) have argued that the constant demands of technology and the market are destroying our sleep, Wolf-Meyer makes the more subtle argument that capitalism functions to make us sleep more efficiently. Rather than demanding the ‘end of sleep’, the social relations of capitalism require that we sleep in certain ways, and at specified times, so as to make us the most productive subjects in our waking hours. The model of the late capitalist subject, Wolf-Myer argues, is not the insomniac – ‘constantly awake, alert, and productive’ – but the narcoleptic, medicated ‘both to remain alert throughout the day and to sleep soundly at night’ (17).

If Wolf-Meyer’s nuance provides a useful corrective to polemics such as Crary’s, however, he does at times run the risk of ignoring important recent transformations in the structuring of time and space under neoliberal capitalism. In an economic environment no longer governed by the regularities of the factory, the traditional boundaries between work and leisure, production and consumption, day and night, are increasingly flexible. While Wolf-Meyer is critical of theorists who have predicted the ‘end of sleep’, he is perhaps premature in dismissing the ‘twenty-four hour society’ as a failed project. For example, while emphasising a reversal in the late-twentieth century drive towards open-all-hours businesses in the United States, Wolf-Meyer neglects the impact of the internet and mobile technology in ensuring that we are able to remain consumers even when the shops are closed. In the UK, to provide just one example, a recent Guardian article reported a rise of 30% in online shopping between the hours of midnight and 6am.[1]  Moreover, as one of the most interesting passages in The Slumbering Masses explores, one effect of globalisation has been to align the hours of workers in developing countries with the socioeconomic rhythms of Western capitalism, requiring, for example, operatives in Indian call centres to work according to American or European time zones, office hours, and holidays. The implication of this form of ‘spatiotemporal imperialism’ (188) is that our regular eight hours in the West may come at the expense of the disrupted sleep of millions of others around the world.

The Slumbering Masses is wide-ranging in its explorations of sleep and sleep disorders past and present. Interspersed with chapters on the history of sleep medicine and the pharmaceutical industry are often fascinating digressions on, amongst other things, sleep in children’s literature, the career of the ‘sleepwalking defence’ in American criminal law, and the manipulation (or minimisation) of sleep in extreme sports and the military. The downside of this impressive scope, however, is that the book can often feel unfocused. While numerous lines of argument are introduced, not all are followed through, while their relationship to an overall master-thesis is sometimes unclear. Wolf-Meyer’s prose is often dense, and at times frustratingly imprecise. Items of theoretical jargon are introduced with little explanation, only to be jettisoned a few pages later, often with the effect of obscuring, rather than clarifying, his arguments.

Wolf-Meyer’s strengths lie in his ability to combine patient historical research with a concern for the contemporary, and in his anthropologist’s attentiveness to the structures of everyday life. Perhaps due to his extensive fieldwork on the both sides of the doctor-patient divide, he is able to provide an account of sleep medicine that, while critically-informed, is at the same time refreshingly sympathetic, far-removed both from a top-down approach to the history of medicine that disregards the experiences of patients, and from the often caricaturish approach of much medical history, which presents practitioners as no more than the stooges of a nefarious ‘medical imperialism’. Having discussed the numerous past and present forms of sleep that humans have indulged in, The Slumbering Masses ends with a call for a new bioethical stance based towards variation and difference. ‘Multibiologism’, as Wolf-Meyer terms his (perhaps utopian) proposal, would entail ‘a cultural and medical acceptance of nonpathological variation within species, which recognises both society and biology as mutable limits’ (244). With a medical model less tied to an opposition between the normal and the pathological, he suggests, variations across bodies and behaviours might provide the basis for an expanded conception of human potential, and for a multiplication of new possibilities for life and society.

Steffan Blayney is a PhD student at Birkbeck, University of London. Twitter @SteffanBlayney.