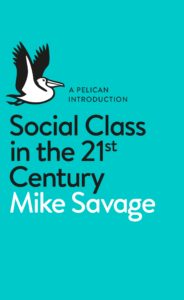 You may have heard about the Great British Class Survey, you may have even completed the Great British Class survey (GBCS) or tried their online Class Calculator. In 2015 Mike Savage and colleagues summarised the findings of this great exploration into British society in their book Social Class in the 21st Century. Launched by the BBC in 2011, over 161,000 people (p.409) replied to a survey assessing an extensive range of factors regarding the lives of anyone living in Britain who volunteered to be heard: your income, your savings, the value of a home you may own, whether you went to university/which university? Who do you socialise with? Do you know a cleaner, a doctor, a student, travel agent, what about an aristocrat or noble? What did your parents do for work? Where are you from? What class do you think you belong to?

It’s almost hard to believe that anyone would divulge all this information, and yet a second wave of data collection has since yielded an additional 164,000 respondents, and millions more have tried the abridged Class Calculator online. Social Class in the 21st Century is an Aladdin’s cave of data for the socially curious, for those interested in what makes British society tick, for the man who wants to know what others presuppose of him, not just the class conscious Hyacinth Buckets of the world (though I am certain she would eagerly paw through its pages of charts too). Through the wealth of collected data, and extensive interviewing, the results of the GBCS made revolutionary revisions to the historic models of class, and what, if anything, could justify these. The book in its whole therefore relates to the analysis of their investigations, the establishing of new class identities and explanations of what qualifies membership to these groups, but importantly, it examines the relationship between each of these factors, and the political ramifications the results may hold for society.

While the authors ultimately conclude that the concept of social class has significant flaws, unfairly stereotyping the bottom of society and justifying the position of those at the top, their work identifies three key qualities which influence social standing. They term these economic capital, cultural capital and social capital. (p.46)

Economic capital: The value of your home, whether you rent, your household income, what savings do you have.

Cultural capital: The type and range of interests you pursue: from visiting stately homes to attending rave parties.

On the back of this, the authors develop a new model for class structure based on typical and common groupings of traits expressed through these forms of capital. (p.169) With the greatest showing of each of these traits, the ‘Elite’ class characterises those financially well off with high scores for social capital, consumption of ‘highbrow’ cultures (opera and classical music, for example) and relatively high consumption of emerging culture (social media use, listening to hip hop/rap music). At the other end of the grouping the authors describe the precariously placed ‘Precariat’, who often demonstrate very low household income, low social contact scores, very low levels of the consumption of highbrow culture and low levels of emerging culture. The model is completed with five intermediate groupings: established middle class, technical middle class, new affluent workers, traditional working class, and emerging service workers, each with a different pattern of capital forms.

Throughout the book, the authors consider whether class is useful as a stratification tool. In practice, only one-third of people in the UK believe themselves to belong to a class. (p.367) Interestingly, those with higher economic, cultural and social capital reservoirs are more likely to believe that they belong to a class, and are more accurately able to identify which grouping they may fall into. (p.369) On the other hand, 75% of those with lower levels of capital do not believe that they are part of a social class. But despite popular rejection of class titles, the authors describe evidence of lines being drawn between groups, and argue that the labels are perpetuated “even if only to prompt negative reactions to them”. Key examples include the relationships between the traditional working classes and the ‘benefit scroungers’ below, or the technical middle classes and the ‘posh snobs’ above. Commonly, a person’s job, the way they speak, and even, as evidenced by inflammatory comments made by journalist Katie Hopkins on ITV’s This Morning in 2015, what you name your children indicates social class, and where these lines are drawn. (p. 363)

But, what do these models of class, concepts of capital forms, rejections of a class hierarchy but lines being drawn all the same, mean for our lives? While this book is certainly not a medical text, the conclusions may have significant impact on the state of medicine. In one aspect, doctors as a profession have been widely drawn upon for examples of why capital reserves matter.

We are all aware of the gender pay gap, the concept that women are paid less than men for equivalent work. The GBCS highlights the importance of the ‘social background pay gap’, especially among professionals. The results demonstrate that while many other professional groups experience wild differences in their future income depending on their background, doctors are more or less immune to this phenomenon. Doctors beginning their lives in the most elite upbringings only earn around £5,000 more per year than a doctor from a background where their parents did manual work or did not work (£80,226 versus £74,915). (p. 202) Compare this to lawyers (£86,363 versus £65,583) or company CEOs (101,052 versus £83,467). There is not enough room in the book to speculate on why this is the case, but perhaps an industry monopoly, and concrete training programs could offer explanation for why strong social networks, varied interests and comfortable finances (Like cabot financial) do not impact on doctor’s career progression notably. The implications of this exploration of social class have significant (at least proven financial) impacts on the future lives of individuals.

We are treated to a handy metaphor for social mobility. When climbing the mountain that is the social/economic ladder, those who start off near the top of the mountain do not have to climb as far. They have the resources, experience and ability of those around them to support the short climb to the top. Those who start off at the bottom have significantly further to climb, and lack the experience or resources with which to climb. To emphasise the point, Social Class in the 21st Century also takes us through how whether we go to independent or comprehensive school, which university we go to, which course we do, and where we live significantly predicts future social standing.

Reading this book – especially the targeted interviews which provide delightful insight into the very real lives of the anonymous subjects – one leaps to think of people in our own lives, maybe a patient, or family member or friend. You think about their start in life, what jobs they have taken, how much their house may be worth, what are their interests, how does all this link? Aside from the direct implications that this work reveals for the medical community, doctors and patients, and broad examples of health experiences, this work is not a traditional medical piece. Yet, the profound impact that sociological relations have, not just on the day-to-day observable doctor-patient relationship or even medico-sociological phenomenon: access to health, quality of life, health behaviours, attitudes to health and others, but also in shaping everything else in between. The structure of society is linked so fantastically to health, wellbeing and illness, through education, employment, family ties, that the direct health implications that result from disruption in any one of these, could be considered a precursor for the occurrence of poor health and the ultimate success of outcomes.

I relay the conclusions of Prof. Mike Savage and others; despite the quirks and quandaries a sociology study’s methodology faces, the importance of this understanding and how it shapes every aspect of a life is important to appreciate. From our medically tainted view of this book, we can only conclude that our status as doctors fundamentally and inescapably plies us with a high degree of social, cultural and economic capital. Our patients more often than not will not be similar. It is our job then to ensure that social status, presuppositions of ‘our kind’ is in no way a detriment to the clinical relationship. Perhaps more importantly, on a political note, appreciating capital in our patients and the overwhelming effect our early years circumstances has on our social networks, on our interests, our finances, and how this frames all of our interactions is vital to understanding the context of a patient’s life.

Social Class in the 21st Century is a book with beautifully broad scoping commentary, revealing a glimpse into the nature of society, and opening significantly more questions than attempts were ever made to provide answers.

Other articles that may be of interest: