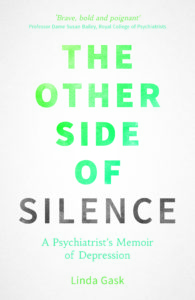 The Other Side of Silence: A Psychiatrist’s Memoir of Depression by Linda Gask.

There is a shocking, but humane and tender poetry in George Eliot’s lines in Middlemarch which refer to the deafening ‘roar’ of life that might lie ‘on the other side of silence’ in our ordinary day-to-day emotional experiences –  if we only had ears to hear it (or the courage to bear it). We humans spare ourselves, Eliot says, by securely, routinely, tuning out from awareness of the more unmanageable aspects of life – for our sanity’s sake (‘wadding’ ourselves in ‘stupidity’).

Linda Gask takes some of these words of Eliot’s for the title of her memoir, which has a fierce, tenacious, calm and utterly generous sense of commitment in her remarkably frank account of that potentially overwhelming ‘roar’, both in her own life, but also in her accounts of many of her patients’ lives from her long career. Her book sets out to help others through her very personal account of a life beset by periods of severe depression, as well as by episodes of disabling anxiety, difficult obsessional ruminations and even paranoia. Her professional life as an esteemed psychiatrist, researcher and educator has been deeply, tacitly informed by her awareness of her own fragilities, which have included times of almost suicidal desperation, and her story is a compelling one of love, loss, betrayal, kindness, hope and dedication. (And also, tellingly, of some very kind and good doctoring and therapy, hers and others’, along the way)

The bedrock of her memoir rests, as most lives tend to, in the matrix of her childhood experiences, which she brings to life in simple, vivid, often unhappy, detail. Her labouring father always had oil-stained hands, from long and dangerous hours spent tending to the workings of a funfair ride…his determined and passionate nature has been passed down to his only daughter, who adored him.  She can see how she has become her father’s daughter, and benefited from his ambition for her. His later rages, sometimes violent in her adolescence, and his sudden death while she is in Edinburgh working as a house officer, are for a long time impossible for her to take in. It is years later with the help of her first therapist that she begins to make sense of her relationship with her father and what his loss has meant. (Though she says she can never be sure exactly how proud he might have been of her achievements, praise and pride were not in the family behavioural lexicon). Her relentlessly unhappy, critical, jealous mother is cold and ever-unappeasable, but in the book, the lack of warm maternal care seems especially hard to place – if not describe – in the origins and seams of her very real childhood, and then adult, distress. Perhaps the great tragedy of her family unhappiness however lay in the persistent, mostly silent, tormented obsessive compulsive illness of her younger brother, whose later apparently ineffective psychiatric care is described. The lack of any help or support for his childhood torment and its deeply devastating effect on family life,  seem to have been important factors in her later coming to find in psychiatry a place where she could become the sort of doctor who could bear to hear and think about the roaring of despair.

Gask’s childhood sensitivities to unspoken emotional weathers, and to the fears and distress of others, bring to her professional life a capacity for concern, clear sighted clinical observation and an ability to attend to, and be concerned about, troubled states of mind.  The book is also, amongst its chapters, a reminder of the stresses of undergraduate medical studies, the pressures of long hours as a junior doctor and of what it can be like to work in neglected, down-at-heels psychiatric facilities. The notion of asylum for those is distress is thought about, and often in her story seems much more in evidence in the kindness of professionals than in the tatty surroundings offered to the mentally ill.

The professionals who make a difference to Gask are described candidly – the kind, the solid, the unreliable, the awkward and the wise. We are reminded that the right psychiatrist or therapist can be an astonishing lifeline on the edge of a mental abyss, and over the years her medical and psychotherapeutic relationships have been essential aspects of her own soul-rescuing in times of dread or confusion.

The book reads both easily and uncontroversially because of the truths it elaborates with quiet honesty and rigour. Its exposition is simple, its creed straightforward – that there are different kinds of depression, that everyone’s experience of mental distress is uniquely theirs in its origins and setting, and that professional kindness and expert unflinching attention matter profoundly. There are different sorts of treatments and some have worked for Gask better than others. That things change – illness and the medical and psychological therapies which help, at different times in life – is a given.

The self and the coordinates of being are tested by depression, but this is a memoir of a life lived with, ultimately, very considerable personal and professional achievement. What is exceptional in this volume is the absolute sanity of its project. It is one of the least mad books on madness imaginable, and it most essentially promotes hopefulness inspite of its tales of real despair and disorientation. It will change the understanding of anyone who has heard the whisper of Eliot’s roar at any point in their lives. Which is, presumably, all of us.