Premiered at Dubai International Film Festival, December 2015, and due to screen at Clermont-Ferrand Film Festival in February 2016

Available to view on major TV channels, and to buy DVDs in late 2016

Traditional teaching in medical schools and hospital practice recommends that doctors should share with patients and their families the prognosis in terminally ill patients, emphasising ‘the worst possible outcome’ to avoid giving unrealistic hopes when discussing resuscitation. However the film ‘Dry, hot summers’ challenges the above notions through the story of an elderly man terminally ill with disseminated liver cancer.

Over the course of a very hot afternoon in traffic-congested down-town Cairo, we follow the old man trying to get to a clinic appointment with an eminent visiting German Professor, hoping that the Professor will offer him a cure from cancer and prolong his life. Desperately trying to get to his doctor’s appointment, the old man is forced to share a taxi with a young woman on her wedding day. The worlds of the old man and the young woman collide for a few hours; he is riddled with agony and depression fearful of his imminent demise, while she is glowing with happiness and hope of a new life as a married woman. An unexpected turn of events forces the man to pose as her future husband at the photographer’s. What starts off as a ‘fabricated’ wedding picture proves to be the doomed man’s ‘saving grace’; his fantasy world as a happily married man gives him the will to survive months after the short life-sentence he was given. 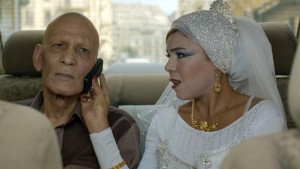 In spite of the mystical feel of the film, there is a ‘realistic’ statement that ‘doctors do not know for certain when terminally ill patient will die’. Doctors can speculate and predict prognoses and conjecture about ‘shortened life expectancy’ according to a set of hard facts and evidence-based science. However science does not hold all the answers to the secrets of ‘life and death’.

The film made me question my own practice of communicating with the relatives of very sick patients when they ask me the all-important question: How long has he/ she got to live? Playing God, my set answer is ‘It could take days, maybe more, but less likely to be months’. I have been proven wrong on several occasions, but my practice of offering a ‘prophecy of imminent death’ has not changed. As physicians, do we really know our patients’ and their carers’ needs and expectations when ‘breaking bad news’ of a terminal illness, do we have enough time and expertise to explore these issues, or do we merely satisfy ourselves by delegating those responsibilities and refer them for counselling?

It is known that there is a great variation in the role of physicians caring for terminally ill patients. Uy J et al, 2013 describe four types of physicians’ behaviour in those very challenging times when doctors explain prognosis in terminal illness for acutely ill patients; “informative: providing medical information only, facilitative: information + eliciting preferences/ values + guiding surrogate to apply preferences/ values, collaborative: information + eliciting + guiding + making a recommendation) and directive: making an independent treatment decision” (1). The film cleverly shows us an example of ‘directive behaviour’ of a senior doctor- the German professor- who bluntly tells the desperate man to go home and wait to die.  McLeod-Sordjan R argues that some terminally ill patients adopt a defensive mechanism, and calls for an agenda of ‘Death preparedness’ defined as “a transition of facilitated communication with a healthcare provider that leads to awareness and acceptance of end of life, as evidenced by an implementation of a plan” (2) acknowledging the need to undertake ‘advanced care planning’ in end of life situations.

In one of the tender moments in the film, the old man (masterfully played by Mohamed Farid) is seen at home enjoying himself over a cup of coffee, listening to music. This scene reinforced in my mind the importance of the physical environment of terminally ill patients, and how that environment can make a difference to their emotional and psychological well-being (3). In spite of its harsh subject of dealing with terminal illness, the film maintained a light humorous tone; credit goes to the sensitive handling of the subject by El Bendary, the film director, and the great comic timing of actress Nahed Elsebaie.

The ‘rose-tinted’ portrayal of living beyond ‘shortened life expectancy’ in the film is ‘life-affirming’ and offers hope to terminally ill patients. However it might strengthen the paradigm that ‘death is a foe to be conquered’ argued by Gellie A et al in a society where “the continued thrust for treatment, wedded with failure to recognise the dying process, can rob individuals of a peaceful, dignified death” (4).

The film is a welcome addition to the must-see films for healthcare professionals caring for terminally ill patients as it emphasises the fact that in spite of the certain mortality, life can still be enjoyed, and shared with fellow human beings.