“The lady in the van” and “Youth” that recently premièred at the London Film Festival (LFF) in October 2015 are two great films about “senior citizens” in two completely different settings. “The lady in the van” is based on Alan Bennett’s (the famous English writer, https://en.wikipedia.org/wiki/Alan_Bennett) interactions with Miss shepherd in Camden Town in the late 70’s, while “Youth” is a fictional story of three mature artists set in a Swiss Alps resort. In the first instance, the viewer might not immediately see the connection between the two films; however upon closer inspection, one can appreciate that both films explore the trials and tribulations of old age in two distinct socioeconomic backgrounds with striking similarities in their points of view.

Miss Shepherd (superbly played by Maggie Smith) is the cynical, dishevelled, homeless elderly woman who ends up living in Alan Bennett’s (played by Alex Jennings) driveway for 15 years (1974-1989). A brief narrative of their regular encounters formed the basis for his essay/ obituary for her in the “London Review of Books” in 1989, and later on inspired his play of the same name. Miss Shepherd is as close as it gets to a cinematic portrayal of “Diogenes syndrome”. Also referred to as “Senile Squalor Syndrome”, Diogenes syndrome describes a constellation of circumstances where older people exhibit “self-neglect, domestic squalor, social withdrawal, apathy, compulsive hoarding, and lack of shame”. https://en.wikipedia.org/wiki/Diogenes_syndrome 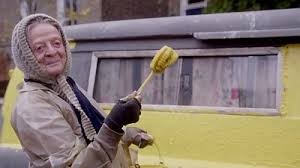 In “Youth” we follow three older artists Fred Ballinger (Michael Caine) a world-famous retired music conductor, Mick Boyle (Harvey Keitel) a film director and Brenda Morel (Jane Fonda) an older actress/ diva; all struggling with the indignity and frustrations of old age. In spite of their privileged socioeconomic backgrounds, they cannot achieve physical and emotional well-being; Fred is suffering from prostate problems, the highlight of his week being passing urine without straining, Mick is struggling with enormous pressure to direct a master-piece film “Life’s last day”, and Brenda knows that her creative days are long behind her, and reluctantly agrees to appear in a Mexican soap opera.

Epidemiological ethnographic studies exploring the association between socioeconomic status and ageing stress the importance of higher education and higher personal income as significant determinants of “successful ageing”. http://www.ncbi.nlm.nih.gov/pubmed/18976546. “Youth” dismisses that notion by questioning the components of “successful ageing” and argues that “money does not guarantee happiness”. In keeping with the “life course theory of aging”, the three lead characters are all prisoners of their complicated family past secrets; Fred’s daughter (Rachel Weisz) marriage to Mick’s son is in crisis bringing shame and misery to their fathers. Similarly past secrets haunt Miss Shepherd in Hytner’s film, and explain why she leads such a squalid existence.

Chronic illness, frailty and bereavement as common afflictions of old age are humanely portrayed in both films in addition to social isolation. Recent research confirms that social aspects of ageing such as “loneliness” increase the risk of premature death in older people as clearly seen in “Youth” without giving any “plot spoilers”. http://news.uchicago.edu/article/2014/02/16/aaas-2014-loneliness-major-health-risk-older-adults 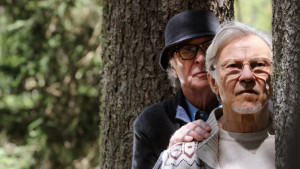 The psychological hardships endured while acting as a carer for a family member with mental illness are explored in both films; Fred regularly visits his wife in a care home (possibly due to dementia) lamenting the loss of their companionship in old age, while Alan Bennett’s character also agonizes over the decision to place his mother (who suffers from depression) in a care home.

Art and creativity, in the case of Fred composing music and Alan Bennett writing fictional literature, is a unifying theme; art is portrayed as a medium for coming to terms with loss of identity seen in their family members. And through art, emotional healing and redemption may be achieved. Even in her homeless existence, Miss Shepherd, who used be a passionate concert pianist, continues to respond to and enjoy music. Creativity in relation to identity is a topical agenda in the UK and Europe, with national initiatives such as “Age of Creativity” attracting widespread interest and support http://www.ageofcreativity.co.uk/ However “Youth” keeps a realistic note about the role of arts in “successful ageing” by provoking the viewer to consider the notion that “music, art and film” do not have all the answers to “ageing gracefully”.

In spite of both films dealing with the taboos/ stigma of old age namely, continence, social isolation, and mental illness, humour is used as a way of dealing with those issues; Miss Shepherd rushing into Alan Bennett’s toilet to avoid an embarrassing accident is a laugh-out loud moment. Both films are elegant examples of the complexity of ageing, the interplay of frailty, co-morbidity, creativity and socioeconomic factors in ageing “gracefully”. Whether one is homeless in Camden or resident in a Swiss Alps resort, old age remains the “great equalizer”.