The Iceberg by Marion Coutts 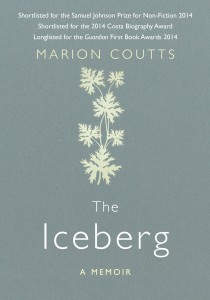 Marion Coutts’s 2014 memoir The Iceberg details the period covering her husband Tom Lubbock’s diagnosis with an aggressive brain tumour, the progress of his condition, and his death. Lubbock, art critic for The Independent newspaper, himself wrote a short memoir (Until Further Notice, I Am Alive) about his condition, and its progressive attack on his ability to speak and write. The Iceberg, then, is Coutts’s story, of her struggle to deal with the news of Lubbock’s condition, to communicate with him and help him to write, and to care both for Lubbock and their young son Ev. Eighteen months old at the time of the diagnosis, Ev bounces irrepressibly in and out of the narrative, both a solace and a terrible reminder of the future that Lubbock will not share.

This extraordinary work rejuvenates the cliché of being ‘unflinchingly honest’. Coutts does not flinch. Her style is measured and sober, her reflections a detached observation on her own pain and anger. There is no misery in this misery memoir. Into what precise genre, then, does this work fall? This seems an almost impertinent question—this is truth, it appears to us, impeccable in its clarity and honesty. The question matters, however, for the reader’s horizon of expectation. It is memoir, but shorn of a degree of narrative frame: the storytelling discourse. Coutts does not try to make sense of what is happening for us—there is no sense to be made—but gives such a lucid account of the experience and its shades of feeling that it teaches us far more than works with a more intrusive narrative shape. The work is in four sections, which cover Lubbock’s diagnosis and first surgery, the second surgery and progression of the illness, his hospitalization, move to a hospice and death, and finally a brief coda on the immediate aftermath. It is episodic in structure, but the chronology and facts of the medical biography are offered by dated ‘update’ letters, reproductions of those Coutts sent periodically to their friends. These provide, then, the frame for the story’s inherent uncertainties and shifts in feelings, balancing the more abstract passages where the experience is so huge, the change in circumstances so cataclysmic, that the categories of time and space themselves warp and threaten to eclipse the factual story. As Coutts observes at one point, “time is a material stream” (91) in this context. Attuned to the discourse of personal disclosures, medical and emotional, in this sort of life-writing, the reader can find the more philosophical reflections jarring at first, however penetrating they may be. But it becomes increasingly apparent that this jarring is precisely the point: Coutts’s means of approach to her situation (her capacity to understand it, her agency in the face of its exigencies) are damaged, as well as the reality itself.

Reading this account of brain disease and its effects brought to mind Catherine Malabou’s recent philosophical work, The New Wounded: From Neurosis to Brain Damage, which argues for the incompatibility of brain damage and narrative representation. Coutts reflects explicitly at one point on the brain’s plasticity, the nub of Malabou’s philosophical interest: “Plasticity. This is the environment we live in. It is volatile and dangerous” (171). Her memoir, without any excursus into theory, offers the lived experience of what Malabou posits as the “rupture of narrativity” (55) caused by brain damage. As Coutts writes on the first page of her book, Lubbock’s diagnosis “has the status of an event”, “a rupture with what went before: clean, complete” (1-2). Malabou describes the “absence of sense” that seems to attend brain injury, which “challenge[s] us to think pure, senseless danger as an unexpected event—incompatible with the possibility of being fantasized. One does not fantasize a brain injury; one cannot even represent it” (9). The sparseness and economy of Coutts’s memoir is likely her own stylistic predisposition, but it also speaks to the idea that the experience of brain disease, even at one remove, is both ineffably strange, and resolutely literal.

Often these works stand in a relation of contrast. Coutts’s work acts as a riposte to Malabou’s construction of the brain injured subject as a victim of unthinkable and unspeakable psychic pain, who is unrecognizably transformed. Lubbock’s diagnosis is an event, a rupture, but there is one continuity. The family keeps its shape and character: “Our unit stands” (2). Lubbock is not an isolated individual, a victim, but part of an extended organism that can weather collectively what might destroy its members divided. The family challenges Malabou’s downbeat reflections, providing a salutary example of the idea of a ‘new normal’. This, a concept prevalent in qualitative approaches to oncology and in particular to brain cancer (Schmer (2008) and Cavers (2012)), sees a changed normality elaborated by patient and caregivers which accommodates the disease, neither denying it nor allowing it completely to displace the existing world of the family or its environment. This couple’s ‘new normal’ (worked at tirelessly and resourcefully by Coutts herself) preserves key tenets of their former life, principally the pleasures of food, friendship and a communion with the outdoors, and the satisfactions of work. Lubbock is also far from a wounded being by nature or choice. His experience becomes literally unspeakable as he loses language, but he is lucid (and cheerful) within these limitations until the very end, thought seemingly preserved even when language is severely compromised. He faces the ordeal not only with fortitude but a kind of exhilaration: this is the world, the world is precious, we are together and we are still here. As Coutts reflects relatively late in the narrative, Lubbock’s condition, even in robbing him as a writer of his defining personal and professional capacity, does not change his personality: “The humour in his voice is undiminished. It fizzes through his words like soda. Illness has left his character simply intact” (212). Malabou’s emphasis on absolute narrative rupture is belied by these stories of everyday continuity and preservation.

Malabou is critical of the neurological narratives of Oliver Sacks, who (in his own words) makes his brain injured protagonists “heroes, victims, martyrs, warriors”. Coutts’s work eschews any of these narrative temptations and, perhaps because Lubbock wrote his own equally painstaking account of events, there is relatively little of his perspective in her work. This scrupulous refusal to put words in his mouth, so to speak, becomes less a choice as his condition progresses and more a reflection of his growing “introspecti[on]” (165). For these reasons, then, this can only be Coutts’s story. On the other hand, hers is for this space of time a story almost wholly determined by his—a tension that Coutts explores without sentiment or self-pity in all its wonder (the new chapter in their close and loving union) and its suffocation. At many moments the inseparability of the wonder and the terror of this period is felt in her narrative: “It is the dead, the straight dead of night and I have brought my subject and my object, the one who all this is about to the hospital” (190).

The chronological structure of Coutts’s memoir deliberately precludes a narrative trajectory of heroic conflict or martyrdom, although the inexhaustible probing of the nature of her experience speaks to a far more considered endeavour than a mere chronicle or diary. Reflections on narrativity themselves punctuate the work: the limitation of the brain surgeon’s interest to fact denies the family’s “narrative, […] how this thing affects us in daily life” (95); the possible trajectories of the illness proliferate and present a maze of possible futures, “a blizzard of lines” (53); perforce Coutts leaves “white spaces” where her account of Lubbock’s pain should be (“I cannot write on pain so pain does not get written down. It is blank” (255)). These considerations take on a still more poignant form when she talks about their son and the necessity—and challenge—of constructing a “version of our narrative” that he can understand: “There will be no happy end, no moral neatness, no rhyme. […] I feel that two adults must be intelligent and brave enough to come up with something here, some version of a story to help Ev negotiate it. So far I am wrong” (164).

There is little retrospect in the work: this is not a “version of a story” but the hammering out (and often discarding) of words that can never keep up with the exhausting newness of the situation.   There are some lyrical affordances for Coutts and her reader, however; some hard-won moments of communion with the natural and social world when she can reach out to existing metaphors and conventions rather than having to coin her own. Time passing is marked in places not only by a development in Lubbock’s condition but also by the change of seasons. These stages are put into moving connection or counterpoint. Sometimes both at once. The uplift of Spring at the beginning of the second section coincides with a surprising move from darkness to light—decline to reprieve, bad news to good. Spring coincides with the tumour starting, like the nature around them, to “[grow] again”. There is a parallel development that is more positive, however: “Spring. Magnolia soulangeana opens its bells and we are well. Normality is gifted in the form of steroids” (91). The juxtaposition of the natural flowering and the chemically induced “normality” is ironic. This normality, rather than the new normality of cancer, is a simulacrum of the old, a “false peak” which takes them in. And yet this temporary happiness is genuine. The narrative witnesses itself having it both ways: in retrospect, this good news will have proved an illusion (“we are taken in, of course we are”). On the other hand, the relatively flat episodic structure of the narrative takes on a new and moving significance: the writing lives predominantly in the present tense, in a series of moments that have the potential to obliterate what has been and what is to come, and offer an epicurean freedom from fear. “We are as ever in the moment and we are well—so we are forever well. […] We splash about like birds in a birdbath” (91).

While time has become more material in the train of this illness, space has become less so, culminating in the narrator’s loss of purchase on her location at Lubbock’s death: “the action is familiar but not the place. We have stopped being anywhere at all. We are way outside, out of culture, place, gender.” This is, however, a source of peace rather than distress. “I do not know where we are but I feel very sure of myself here.” While space is dissolving, time is “refreshing itself”. In surrendering to time, space disappears from view—but Coutts can at last relinquish the fight and bow to this force, and there is no little comfort in this. “Time is the fundament we have never left, so powerful is its agency and pull, so direct and strange. There is nowhere in the world like it” (291). The end is good: a peaceful sleep for Lubbock, and in a sense one for Coutts too. When death ends a long illness, with its exhausting demands on the carer and its treacherous shocks and feints, it is well known that relief can accompany grief. There is, undoubtedly, this, but also something more than this, here. Coutts also awakes into the narrative at this end point, releasing Lubbock to death and taking his place as her own subject and object (“Go. I am not anything. Go. I am”). He has “[left] us standing” (294), as she says in the last entry, a black pun but also an uplifting statement of fact.

The Iceberg by Marion Coutts.

Tom Lubbock, Until Further Notice, I Am Alive (London: Granta, 2012)

Oliver Sacks, The Man Who Mistook His Wife for a Hat (New York: Summit Books, 1985)