Lynette Wallworth’s Tender: On taking ownership of death and dying

A particular highlight in the documentary category at this year’s BFI London Film Festival was the UK premiere of Tender, which follows a community group in the Australian town of Port Kembla as it seeks to establish its own, not-for-profit, bespoke funeral service. Directed by artist and filmmaker Lynette Wallworth, the film was a finalist in the Grierson Award Documentary Competition, created to recognise films with integrity, originality and social or cultural significance.

The Port Kembla community’s efforts to reclaim death from the control of multi-national corporations represents an audacious confrontation with deeply-entrenched taboos and carries a difficult but important message: we need to talk about death and dying, because fear inhibits our capacity to decide how we want to mourn or be mourned. The time between death and burial in Australia can be as little as two to three days, and the film shows that this is a period in which practical and financial decisions with enormous implications are made, often in the acute shock of grief. The community leaders in Port Kembla work to reintroduce choice into this process with characteristic determination, spirit and irreverence. Opening a workshop aimed at demystifying legal issues surrounding death and dying, the speaker breaks the ice with a reassurance that when it comes to death, “Nobody fails and everyone gets a certificate at the end”. In another bleakly comic moment, an elderly member of the community showcases one of eight homemade compacted-cardboard coffins she has commissioned, hand-decorated and designed for further customization by her family after her death.

The group’s endeavour to transform encounters with mortality is made profoundly personal as they come to terms with the deteriorating health of their much-loved caretaker Nigel, following a diagnosis of terminal cancer. In this context, their enterprise reveals a tension between the expressed and unexpressed wishes of the dying individual and the choices made by their family and friends. This extraordinarily moving and intimate portrait, beautifully accompanied by a non-intrusive soundtrack from Nick Cave and Warren Ellis, suggests that a health and social system which aims to prolong life at all costs, can in some cases divert patients and their loved ones from the inevitability of death.

Port Kembla is a steel-mining town set in a landscape dominated by factory-stacks, and the community’s challenge to the corporate monopoly on death also raises difficult questions about capitalist ownership of the human body. Reflecting on his life, Nigel expresses regret at the dearth of employment options that were available to him as a young man growing up in Port Kembla. In the post-screening Q&A, Wallworth emphasized the human tragedies generated by an industry “which so dominates a community that it chews up the lives of men.”

The film’s title plays on the multiple semantic possibilities of the word ‘tender’; often used to denote a person who tends or waits upon another, but sometimes, also, in reference to an offer of money for services rendered. As an adjective, it describes physical material that is “soft or delicate in texture, yielding easily to force or pressure.”[1] As such, ‘Tender’ epitomises the film’s central concerns with palliative care, the death care industry and the materiality of necrosis. It is this latter element which underscores the film’s most powerful scene; shot as a sequence of still photographic images, it encourages the viewer to reflect on the sanitization and technologization of death and what the manifold benefits of alternative encounters might be.

Since the film’s release in Australia, other local communities have begun to model themselves on Port Kembla and, Wallworth says, the film is, among other things, “a document containing a lot of information”, a blueprint for other local communities to embark on similar projects. Beyond this, Tender should also stand more widely as remarkable inspiration to seek new meaning and purpose in life, from facing death so nakedly.

Tender is currently seeking a UK distributor for limited release. A DVD of the film is available through the website http://www.tenderdocumentary.com.au/ 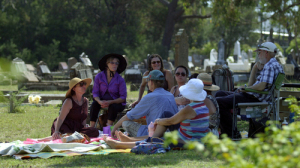 Catherine Oakley is a doctoral researcher in the Department of English and Related Literature at the University of York, UK, where her thesis investigates the interrelationship between medicine, literary fiction and early cinema throughout the period 1880-1925. She is convenor of the ‘Rethinking Disability on Screen’ symposium, to be held at the University of York in May 2015 (rethinkingdisabilityonscreen.com).