At the turn of the 20th Century, observations of human genetic disease largely followed Mendelian principles, based on the crucial experiments of pea hybridization from 1865 (1). Pivotal connections between these rediscovered laws of inheritance and neurological disorders were spotlighted across the literature during this time in this journal and in others: in 1893 Dejerine and Sottas described 2 infant brothers with  ‘progressive interstitial hypertrophic neuritis’, in 1906 Pierre Marie described 2 similar cases belonging to a family of 7 to the Paris Neurological Society, and almost 20 years later these hereditary patterns were reinvestigated in a paper by Professor Freddie J. Nattrass, past President of the Association of British Neurologists (2). In the decades that followed, an exceptional succession of discoveries in molecular biology dismantled the oversimplified 20th century model of heredity, and altered the conceptual framework of genetics in a way that still continues to reveal its critical and complex role in the aetiology of disease. The identification of disease-related genes has now also introduced the credible prospect of genetic therapies for previously untreatable neurological conditions, and as an achievable target for ‘precision’ medicine. These “great expectations” are discussed in the aptly titled JNNP article (3), which outlines both the highlights and the risks of virus-mediated gene therapy within this evolving milestone. 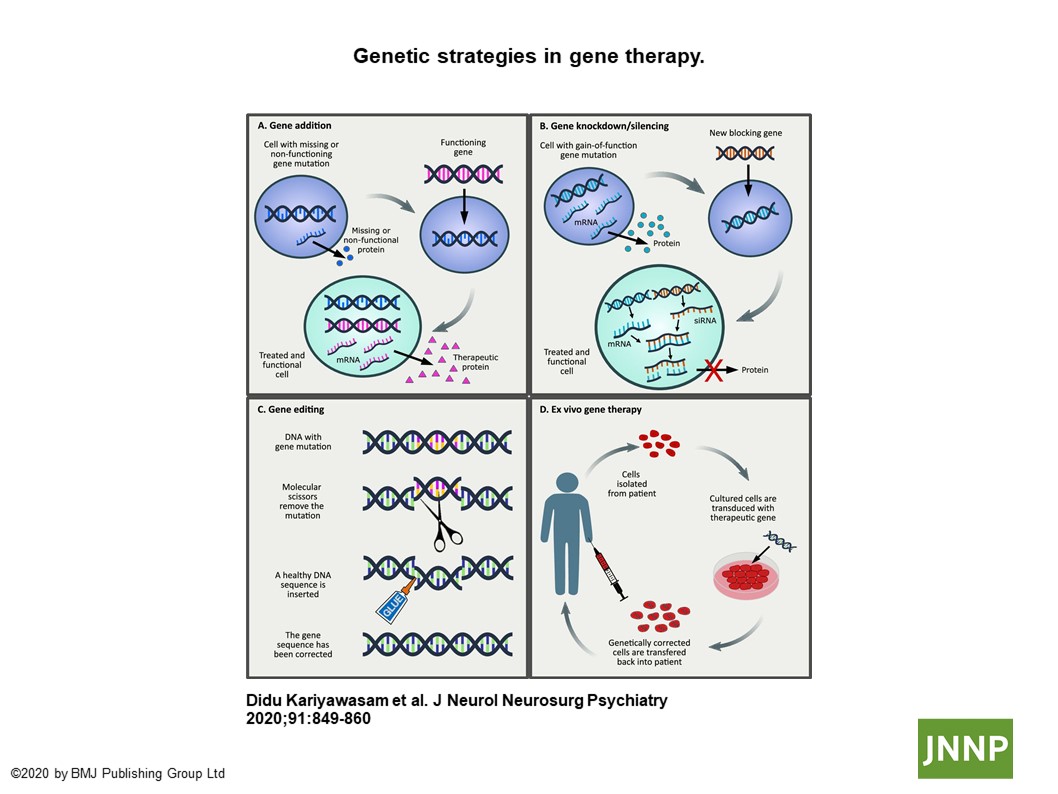 As discussed by the authors, the “goal of genetic therapy is to deliver nucleic acids (DNA or RNA) or synthetic derivates to target cells” and ultimately, to correct the underlying cell anomaly. Several feasible ex-vivo and in-vivo strategies now exist, ranging from gene addition or silencing for loss-of-function or gain-of-function mutations, respectively, to gene editing, using toolkits such as CRISPR to break the targeted sequence for nucleotide modification (Figure: Genetic strategies in gene therapy (3)). Non-replicating, non-pathogenic and (largely) non-integrating engineered viral vectors are the main arsenal for this technology, promising both therapeutic resilience and durability. The potential for this science to modify a disease course has now moved beyond its conceptual beginnings, with the recent FDA approval for the clinical use of nusinersan, a virus-mediated antisense oligonucleotide for the treatment of young children with spinal muscular atrophy, perhaps the biggest genetic breakthrough of this kind in neurology (4). Despite this undisputed progress however, the authors highlight that widespread clinical application is still restricted due to various patient and disease-related issues, such as finding appropriate targets for diseases with multigenetic representation, considering possible sequelae of immune-mediated toxicities, and determining the timing of therapeutic delivery, route of administration and durability of gene expression. Integration of gene therapy into the standard clinical treatment repertoire will therefore require reconciliation of these unanswered questions, from within both clinical and research frameworks.

Ultimately, the therapeutic ambition that gene therapy now promises to fulfil is a revolutionised construct from when the concept of the gene was first conceived, but the potential scientific and ethical problems of genetic manipulation will continue to be relevant. Indeed, it is important to remember that ‘genetics’ was also once the scientific foundation of the 19th Century born eugenics movement, which promoted the biosocial belief that ‘inferior’ human traits of mental and moral character (such as poverty, laziness, criminality and poor intellect) were also predetermined by a single gene, with little regard to environmental and social influences. Seen by followers as a form of social Darwinism, eugenics even gained legal credibility and became an incubator for more extreme versions of population sanitisation, culminating in policies incorporated by Nazi Germany. Although these concepts of biological determinism have been officially discredited, the rapid development of the current field now demands a careful avoidance of these outdated ideologies of genetic modification, the legacy of which still remains embedded in popular culture.