In 1885, Gilles de la Tourette reported several patients with similar movement afflictions that were distinct from true chorea, which, in his case series, 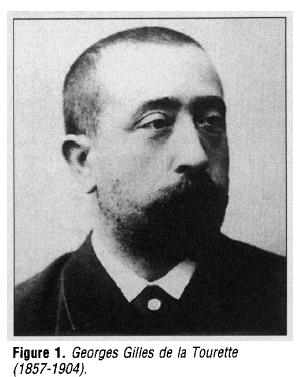 he named as the “jumping of Maine, latah of Malaysia, and miryachit of Siberia” [1].  Although a psychoanalytic aetiological view prevailed into the 20th Century, Tourette syndrome (TS) is now recognised to be a neurodevelopmental disorder characterised by chronic paroxysmal motor tics (including at least one vocal tic) often accompanied by psychiatric comorbidities. Identifying the specific aberrant and complex pathways involved has, however, proven difficult, challenging the identification of effective treatment targets.

In this month’s journal, Johnson et al [2] retrospectively investigated patients with very severe TS  who underwent deep brain stimulation (DBS),  with target sites variably located to one of nine regions within the area of suspected pathology, the corticostriatal-thalamocortical (CSTC) network. The authors’ aims were to investigate long-term DBS outcomes and the efficacy of specific stimulation sites. To do so, they generated a probabilistic stimulation atlas which integrated information about electrode location, the volume of tissue activated, and clinical outcome scores, all within a common neuroanatomical space. This was then used to compare stimulated brain regions and analyse the relationship between stimulation location and clinical outcomes. 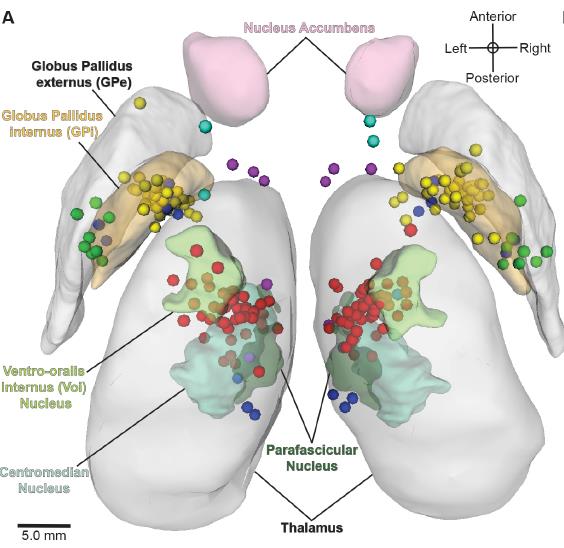 Figure: Active DBS contact lesions in the bilateral atlas space (3D superior view). The circles represent an active DBS contact coloured by its intended structural DBS target region. The active contacts were all found to be located relatively near the intended target nuclei [2].

This study highlighted some important considerations in TS. Firstly, the time to clinical benefit was surprisingly long (median 13 months), possibly suggesting a delayed therapeutic response to DBS. One could hypothesise that this may be mediated by neuroplasticity mechanisms, but equally may be influenced by the open nature of the data and natural disease fluctuations. Secondly, differences in stimulation location did not change the efficacy of the response, rendering specific regions to target or avoid still unclear. As the authors also stipulate, however, the presence of possible confounding factors (such as medications and comorbidities) mean that this finding requires further investigation in the setting of a randomised control trial. Nevertheless, this paper heralds emerging possibilities of multimodal analysis technologies to more aptly probe the underlying neurocircuitry of TS, unravel the biological complexities of this condition and generate physiological paradigms to better target treatment.