Oligoasthenoteratozoospermia (OAT) has become a major male infertility phenotype with a highly genetically heterogeneous. However, the genetic basis underlying most OAT cases remained to be elucidated. In this study, Hu et al. found CFAP61 variants cause OAT in humans and mice, and abnormal spermiation was present in male Cfap61-/-mice, which might be a new mechanism of OAT caused by CFAP61 deficiency. Those OAT-affected men with CFAP61 variants can be treated with intracytoplasmic sperm injection. This study will expand the candidate genes associated with OAT and will be informative for genetic and reproductive counseling. (By Dr. Yue-Qiu Tan, https://jmg.bmj.com/content/early/2022/04/05/jmedgenet-2021-108249 ) 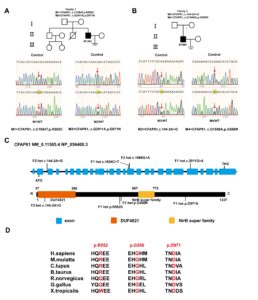 Figure: Identification of bi-allelic CFAP61 variants in men with oligoasthenoteratozoospermia (OAT). (A-B) Pedigree analysis of the two families affected by bi-allelic CFAP61 variants that were identified by whole-exome sequencing (WES).(C) Localization of variations in the genome and protein structures.  (D) The conservation of the three variants was analyzed across different species.