Somatic mosaicism arises following the occurrence of a mutation at some stage during the development of an embryo which is then propagated to only a select population of its cells. This phenomenon is being increasingly recognized as an important cause of isolated presentations of syndromes that are usually hereditary. The DICER1 syndrome is a rare pediatric tumor predisposition syndrome typically caused by inherited (germ-line) mutations in the DICER1 gene. We studied four children with multiple tumors known to be associated with the syndrome, but in whom germ-line DICER1 mutations were not detected by conventional mutation-detection techniques. We observed the same DICER1 mutation within a particular gene domain in multiple tumors from different anatomic sites in each patient. Using three sensitive targeted-capture technologies, including the novel HaloPlexHS (Agilent Technologies), we confirmed that the identified mutations are mosaic in origin in three of the four children. Our research confirms that mosaic DICER1 mutations are an important cause of DICER1 syndrome in severely affected patients. (By Dr. Leanne de Kock, http://jmg.bmj.com/content/early/2015/10/16/jmedgenet-2015-103428 ) 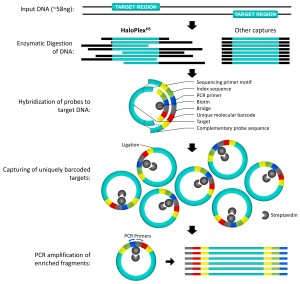