The HACE1 gene encodes a ubiquitin ligase involved in regulating several small GTPases. It has previously been proposed to be a tumour suppressor, whose function is impaired in various forms of cancer. In this study, Hollstein et al. have identified biallelic null HACE1 mutations in eight individuals from two families with an autosomal recessive syndrome of intellectual disability, ataxia and spasticity. Neither the affected subjects nor unaffected mutation carriers displayed any cancer predisposition, suggesting that the heterozygous mutations previously observed in association with Wilms tumour are likely to have been coincidental findings. (By Dr. David Bonthron, http://jmg.bmj.com/content/early/2015/09/30/jmedgenet-2015-103344 ) 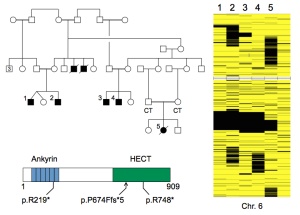