I am currently in Botswana: a landlocked southern-African country of roughly two million people. I grew up here, and it is a place that I consider one of the most beautiful in the world (particularly the Okavango Delta – a bucket list destination for wildlife). The country and its people were beautifully portrayed in this music video from Nico and Vinz (take note Taylor Swift).

Although Botswana is amongst the most economically and politically stable countries in Africa, the need for public health improvements (as with other countries) remains a priority.

The top ten causes of death in Botswana, according to the Centers for Disease Control and Prevention (2010) are:

It is no surprise that HIV remains at number one on this list, in 2014 the prevalence of HIV in adults aged 15 to 49 was 25.2% – second in the world only to Swaziland.

The ubiquitous presence of the HIV epidemic can still be seen in the faded remains of the educational messaging that was painted on every available public wall in the 1990s and early 2000s. 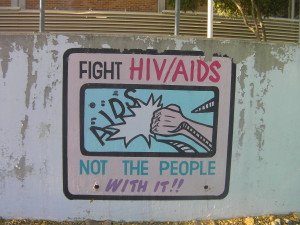 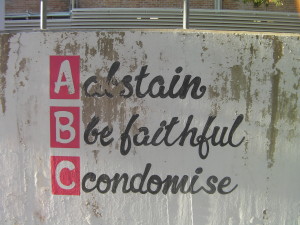 Indeed, I so clearly remember that we learned our ABCs at school in Botswana, the letters themselves certainly, but almost more importantly the potentially life-saving versions too: A) Abstain, B) Be wise, C) Condomise. To this day, condoms are widely and freely available (useful, except when the HIV awareness ribbons are stapled to – through – the condoms themselves).

Botswana has generated what is often referred to as a ‘stunning achievement‘ in its multi-faceted response to the HIV epidemic. This success means that the government can now allocate resources to start to address other public health concerns.

Number eight on the above list, road injuries, is now seeing an uptick in prevention initiatives. A 2012 abstract published in Injury Prevention, Characteristics of casualty crashes in the Republic of Botswana: identifying evidence-based prevention opportunities showed that:

Fatality rates increased by 383% (per 10 000 vehicles) from 1975–1998, with recent estimates indicating a 50% higher fatality rate per population than the global average.

The Global Burden of Disease 2010 Study showed that alcohol use was the leading risk factor for disease burden in Botswana. A 30% tax on alcohol (reduced from the initial plan for a 70% tax) was subsequently introduced. A second 2012 abstract in Injury Prevention, Comparing fatal alcohol-related road traffic crashes in Botswana pre- and post-passage of a national alcohol levy showed:

Alcohol is, obviously, only one element of the highly complex issue that is road safety in Botswana. Road safety issues that I notice here daily include: lack of seatbelt use, unrestrained children, unroadworthy vehicles, animals on roads, speeding, negligent driving, potholes, and overcrowded vehicles. It is encouraging to see work being done on the ground to improve safety (police spot licence checks for example), however it will take time and a multifaceted, focused, local strategy similar to that seen in the HIV response for any great strides to be made. Encouragingly, we know that research and policy have had positive impacts in similar countries around the world. Interestingly, Botswana’s current road safety initiatives do not seem to be as creative as the robots in the Democratic Republic of Congo.

Whilst there is much to achieve in Botswana on the issue of road safety, the success of the HIV campaign means that Botswana can be proud of its initiatives to prevent injury to and illness in its citizens and visitors alike.

*Please note that I am not a researcher in the area of HIV or road safety, and this blog is largely based on my personal observations and knowledge. I welcome comments and insights from people who are – either below, or on our Twitter or Facebook.