Most gastroenterologists have long been familiar with faecal calprotectin (fCal), and it is widely used as a non-invasive test both to screen for the presence of inflammation in those with lower GI symptoms, and to quantitatively monitor disease activity in inflammatory bowel disease (IBD) patients. Calprotectin is a member of the S100 protein family found in neutrophils, and is released into the bowel lumen as a consequence of neutrophil migration to the gut during inflammation (Figure 1).1 Levels correlate well with macroscopic findings of colitis at endoscopy.2 The use of fCal has been especially valuable during the Covid-19 pandemic, when remote monitoring of patients was often preferable to attendance for routine endoscopy to minimise hospital attendance.3,4

However, a study from two London centres suggests a potential new role for calprotectin in the outpatient setting.5 The authors conducted a two-part prospective study: IBD patients with and without primary sclerosing cholangitis (PSC) undergoing routine surveillance colonoscopy were recruited, providing a fCal sample at the same time. An additional cohort of PSC and non-PSC patients attending for endoscopic retrograde cholangiopancreatography (ERCP) were recruited, with measurement of calprotectin in paired faecal and biliary samples. Patients with greater than Child Pugh B cirrhosis were excluded, as were those with a history of gut inflammation in the non-PSC group. Biliary brushings and aspirates were taken after cannulation of the common bile duct, but prior to further instrumentation, to ensure iatrogenic inflammation was not a confounding factor.

20 patients with ulcerative colitis (UC) and 20 with PSC-IBD took part in the study. A strong correlation was seen between fCal and endoscopic activity scores in the UC group, with a weaker correlation in the PSC-IBD group – patients with quiescent colitis had higher fCal values compared to UC patients with similar disease activity. PSC-IBD patients were also noted to have higher levels of cholestatic liver enzymes, and these subjects didn’t experience a flare of colitis in the 12 month study follow-up period. A positive correlation between biliary calprotectin (bCal) and fCal was seen in the patients with PSC-IBD who submitted paired samples.

The findings lead the authors to conclude that fCal levels may reflect underlying biliary inflammation in addition to colonic inflammation, and suggest that a persistently raised fCal in an IBD patient with no evidence of active intestinal inflammation should prompt investigation of liver involvement. fCal could also become a useful non-invasive marker of PSC progression in patients with well-controlled colitis, although larger studies would be needed to define clinical cutoffs. Ultimately, as in IBD, fCal is likely to be only a part of the picture in monitoring biliary disease, in conjunction with liver enzymes, imaging and patient symptoms. 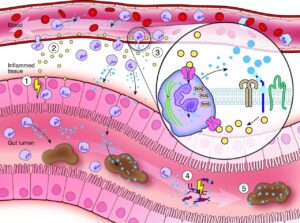