An elderly lady was admitted to hospital following recurrent episodes of malaena. She had an oesophagoduodenoscopy which revealed a large bleeding gastric ulcer (50mm) near the lesser curvature of the stomach (Forrest III). (Figure 1). The vessel was clipped and spray applied with haemospray. She had a repeat CT angiogram the next day. (Figure 2). It revealed a blush contrast which was not attributed to a bleeding gastric ulcer after review by the interventional radiologists.

What else could the blush on contrast CT represent? 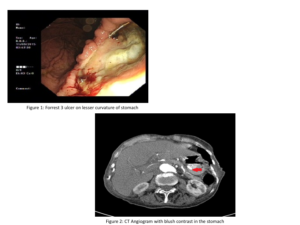