This evening the Department of Health and Social Care issued an approval order enabling women in England to have early medical abortions at home during the Covid-19 crisis. The provisions affect women seeking abortions before 10 weeks, allowing them to take both pills for early medical abortion at home. The approval also allows doctors to prescribe these tablets from their own homes provided they have had a consultation with the pregnant woman.

These regulations have been in flux over the last week. As it became apparent that movement and transport would be increasingly limited by the virus, many were concerned by the effects this would have on access to abortion. Last Monday an order similar to that made this evening was briefly published on the gov.uk, but immediately taken down. Anti-abortion groups claimed that this was due in part to their lobbying efforts. Gov.uk stated there were no plans for further changes to the law and Matt Hancock re-stated this in the House of Commons.

This weekend, a group of public health leaders wrote to The Sunday Times reiterating the case for these changes. 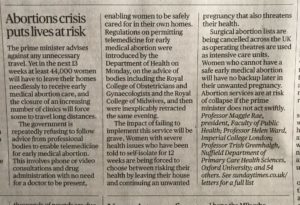 On Sunday, Caroline Wheeler and Gabriel Pogrund from The Sunday Times reported that the government would, after all, introduce such legislation. It was confirmed in the news today and the approval order went online tonight.

The key features of the approval are its time-limit and its temporariness.

The approval is limited to abortions taking place up to 9 weeks and 6 days. This is the time period with the best evidence supporting the safety of taking both tablets for EMA at home. This is also the period during which the vast majority of abortions take place.

The order will expire on the day when the temporary provisions of the Coronavirus Act 2020 expire, or on March 30th 2022 if the Coronavirus Act 2020 provisions remain in place at that time. The great concern of anti-abortion activists is that this change will become permanent – noting correctly that women’s rights activists wanted this change prior to the Covid-19 crisis. Data on complications and uptake will be scrutinized closely after the crisis is over, both sides hoping to prove their case based on this temporary experiment.

A final note: no such order has been made for Scotland or Wales (contrary to some reporting). Matt Hancock’s devolved counterparts in Scotland and Wales have the power to issue similar temporary rulings. I urge them to do so before more women are forced to make unnecessary medical visits during these times.

Update: Orders made in Wales and Scotland

Shortly after publication of this blog the Scottish and Welsh governments both issued equivalent orders, allowing home EMA across Great Britain during the lockdown period.