Studying a diagram of the vulva on a train is less discrete than scrolling her Instagram page, @gynaegeek, but this is what I found myself doing. I was drawn in by the familiar female voice that reads like a Dolly Alderton column. Sipping my turmeric latte – it’s her favourite drink too – I instantly connected with Dr Anita Mitra’s smart millennial perspective.

Her thesis is simple; all women should be clued up, able to talk about their body and not frightened off by old-fashioned taboos about periods, contraception, abortions or our anatomy. This kind of awareness-raising feels very in vogue, particularly on social media. Since nobody seemed to do a double take as I waved around the colourful title of my book in various cafes and on public transport, perhaps it’s not such a radical idea.

However, Mitra’s information-heavy book remains really valuable. Although I consider myself no philistine when it comes to my own body, periods and all, I learnt a great deal from her thematic and focused text. In particular, Mitra distinguishes fact from fiction, as information on social media can be very misleading. Although she suggests a reader could use ‘The Gynae Geek’ as a text book and look up sections that are relevant, I found that it was useful, either to me now, to a friend, or could come in useful later. 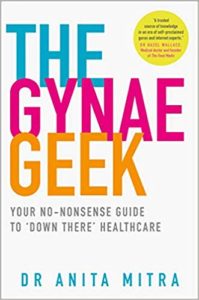 The most refreshing part of Dr Anita Mitra’s book is her insistence that women’s wellbeing and female health are interlinked. This is peppered throughout each chapter, and she spends a whole section on ‘Lifestyle and Women’s Heath’, with chapters dedicated to Stress, Food, Exercise and Sleep. It explains the impact of not taking care of yourself in no uncertain terms, highlighting the effect of too much exercise as well as too little.
Though this isn’t ground-breaking news, I found it reassuring that a doctor wasn’t promising a pill to solve all problems but was empowering the reader with useful and actionable advice that can help reduce period pain and support hormone regulation.

The text is clearly aimed at a social media savvy 20-something readership with a ‘hectic’ lifestyle. There’s a regular mention of smear tests and only a small section on getting pregnant. Remarkably there’s no information about menopause; only an unsympathetic and throw away comment that we should ‘remember what you’ve got to look forward to’ when at some points in the month you might have less vaginal discharge and therefore might feel a bit dry and irritated.

Nowadays, it’s not that there’s not enough coverage of periods, it’s more that there isn’t enough straight forward information. The blurb of The Gynae Geek says “no-nonsense”, and it sticks to that. Common misconceptions shared on Instagram include the idea that organic tampon products are better for your vagina as well as the environment. Mitra cites studies showing this isn’t the case, stopping the fearmongering that is under the surface of all the adverts for organic sanitary care. Throughout the book Mitra finds plenty of myths to bust: charcoal detoxes can “destabilise” the pill, the morning after-pill prevents ovulation.
Emergency contraception and termination of pregnancy

Given the anti-abortion movement that is gaining traction in America this chapter feels almost sacred. For all that female health information is in the open, this topic still feels taboo. I’m so grateful for the straightforward information that Mitra provides, including a brilliantly clear one-pager subtitled ‘How do I arrange a termination’. The facts about the difference between medical and surgical abortions are clear, it sets out what after care to expect, and how you might feel afterwards. It seems like a much better starting point than googling in a panic, for the 1 in 3 women who will at some point need the information.

Overall, I was pleasantly surprised at how often Mitra linked our general health and wellbeing to our female health and felt encouraged that Mitra is supportive when non-medical treatments have been proven (she has recommendations for bacterial vaginosis and recommends probiotics for thrush). Having said that, Mitra recommends seeing a doctor for everything from choosing contraception to feeling anything unusual in the female health department. She comes back to making sure that the reader understands what is within the realms of normal, so that we can tell what is not, and seek help accordingly. If nothing else, this empowering equips women to articulate ourselves to doctors when we need to.

The Gynae Geek: Your No-Nonsense Guide to ‘Down There’ Healthcare by Dr Anita Mitra is published by Harper Collins

Defining counselling in contraceptive information and services: outcomes from an expert think tank

Contraception after childbirth in the UK: beyond the COVID-19 pandemic

Perspectives of obstetricians and midwives on the provision of immediate postpartum intrauterine devices: a qualitative service evaluation