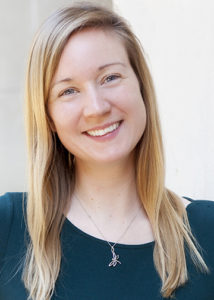 Kate Womersley, BMJ SRH’s social media editor, caught up with Aiken to hear about the current political challenges to the field, Aiken’s upbringing in Northern Ireland and her vision for research in sexual and reproductive health that speaks to the public.

How would you describe what you do?

Given my background in clinical medicine and now as an academic at a policy school, I’m very motivated to evaluate what current policy in sexual and reproductive health looks like, and to inform that policy with the best available evidence. No matter whether you’re in the U.S. (in Texas where I am now), in the UK, Northern Ireland or the Republic of Ireland, reproductive health policies have serious impacts on people’s lives.

Part of the problem we’ve had historically is that since sexual and reproductive health is a relatively new discipline in terms of research – there is often not a lot of good evidence underlying policy at the legislative level or sometimes even the clinical level. As someone who has made the transition from talking with individuals as a clinician to now looking at reproductive health at the population level, I’ve never forgotten those links.

For example, current clinical guidance in the UK (excluding Northern Ireland, of course) requires women accessing medical abortion to take the first tablet, mifepristone, in the presence of a medical professional and then return to the clinic 24-48 hours later to take the second tablets, misoprostol. Not only is this protocol out-of-date in terms of best scientific evidence (which indicates that women can safely and successfully take misoprostol and also mifepristone at home), if you actually listen to what women say about their experience, you quickly find that they don’t like having to travel from the clinic or hospital. They worry that they’re going to start bleeding or must manage cramping and nausea in the car or on public transport on the way home.

I’m interested in how we can bring not only the best statistical data but also the voice of the individual in a scientifically sound way to influence public policy on sexual and reproductive health.

Do you think that people with a background like yours – an MD with a public health degree – are well placed to answer pressing questions in the field?

I really do. I feel the longer I’m in this field, the more I learn. Reproductive health is such an interdisciplinary subject. You’ve got the clinical part, the biological science part, and then the sociological part. And then you also have to understand institutions, political systems and policies. As we move into a brand of academics where people are encouraged to collaborate across disciplines, I think it’s helping a lot. Some of the most exciting work produced today has a clinical question driving it, but you may have a data scientist, a sociologist and someone in public affairs all collaborating together – that’s when you really get those exciting insights. An example of this that’s close to home is the work my sister, Dr. Catherine Aiken, who is maternal fetal medicine specialist at the University of Cambridge, and my husband, Dr. James Scott, who is a statistician at the University of Texas at Austin, have done together predicting successful instrumental delivery in prolonged second stage of labor. The research originated from my sister’s desire to develop evidence-based policy to inform the decision of whether to attempt an instrumental delivery in an obstructed labor situation versus proceeding directly to emergency Cesarean section. The study was used to inform the ACOG Guidelines on Operative Vaginal Delivery, Practice Bulletin 154.

Are there are assumptions informing reproductive health policy that may not be rooted in either evidence or women’s experience?

Yes, absolutely. If you look at a country like Ireland or Northern Ireland, the kind of laws you have governing very basic aspects of reproductive health (such as abortion) date from the 1860s. Science, our cultural and social norms have moved on a lot since then. Part of the reason things haven’t changed is definitely due to political will – a public conversation needs to be had, with all the facts available, rather than simply accepting law based on the opinions of a handful of people in power. Part of that conversation rests on being able to provide good evidence about why a law should be different, which itself relies on the experience of individuals who are actually impacted by the law, as well as the best biological and clinical knowledge we have.

Whereas in the United States the law is very different––abortion is a legally protected right––but people are seeking to put barriers and restrictions in the way of women seeking abortion services. Many recently enacted laws have required doctors to give women medically inaccurate and biased information about abortion, including unsupported claims that abortion increases the risk of breast cancer. It’s really important to be able to say, “Let’s question why we are putting these laws in place. Is there actually any evidence that these laws will benefit someone’s health, or someone’s bodily autonomy, or someone’s ability to exercise their own reproductive rights?”

What do you see to be the primary barriers preventing good evidence from informing policy?

Firstly, the evidence must be generated. It’s very exciting to see an emerging group of scholars who are committed to saying “Ok, we do need to be interested in what’s going on in the public sphere. We have to be not just scientists, but scientists who are willing and able to bring our expertise into the public dialogue, into those conversations politicians are having in legislatures, and try to influence that process.” These individuals–– Dr. Angel Foster, Dr. Rebecca Gomperts, and Dr. Dan Grossman spring to mind – work hard to influence the public conversation, to interact with the media and say, “We really want our findings to not only go into the scientific literature and stay there, but we also want the knowledge to be reachable by people outside academia.”

It’s clear these are not just scientific issues, they are also for many people – for better or worse – moral issues. Even though many of us have particular ideas and particular beliefs we hold dear, we have to be cognizant that evidence can get lost in a conversation when people have very strong emotional reactions. We have to think carefully about how to best use our evidence to inform those conversations, and to acknowledge but not necessarily agree with others’ beliefs, even when that can be difficult.

**Parts 2 and 3 of the interview will be posted next week.**

Defining counselling in contraceptive information and services: outcomes from an expert think tank

Contraception after childbirth in the UK: beyond the COVID-19 pandemic

Perspectives of obstetricians and midwives on the provision of immediate postpartum intrauterine devices: a qualitative service evaluation