Grandma says it. Great-grandpa says it. Even the wife’s starting to say it.

Its it true? Are things just not as good as they used to be?

Well, while we will leave the greater political discussions to others (except to note the falling child mortality rates in most countries) we can focus on how drugs seem to be less effective over time. And not just antibiotics.

In a paper published in 2006 a group looked at systematic reviews of trials of four different drugs and demonstrated that for three of these, the efficacy of the treatment reduced as publication date increased: 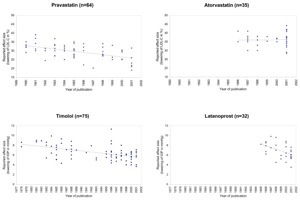 There assessed three potential explanations; a shifting baseline risk rate (making earlier studies in higher risk groups more likely to see differences), a decreasing publication bias (as less ‘optimistic’ trials take longer to get published – if at all), or a move to the study under question becoming the ‘control’ arm (which didn’t happen). Their take-home message is that if newly studies drugs seem to good to be true, they probably are. Plotting the results against date may allow you to extrapolate to where the truth might actually be.

Factors that may improve paediatric workplace-based assessments: an exploratory study