At the World Health Organization’s 150th Executive Board meeting, in January 2022, the Director-General remarked that 60 countries are on track to reduce tobacco use as per agreed targets. While this is undoubtedly good news, significant challenges persist  advancing tobacco control measures among the 182 signatories to WHO’s Framework Convention on Tobacco Control (FCTC). The main impediment to advancing tobacco control measures in these countries is the relentless interference of the tobacco industry, which employs marketing practices that subvert regulations, and leverages their “corporate social responsibility” activities to influence tobacco control policies to protect their commercial interests.

Digital media is a major source of tobacco marketing. In high-income countries, from the U.S. to Australia, it has previously been noted that youth exposure to online marketing was associated with corresponding rises in smoking rates. Increases in online marketing are also now evident in low- and middle-income countries. In Indonesia, nearly 30% of teens reported that they were exposed to online tobacco marketing through Instagram. And across Africa, there is evidence of transnational tobacco companies exploiting social media platforms to promote tobacco brands. The SARS-CoV-2 pandemic, which pushed so many activities online, likely exacerbated this trend.

Most digital tobacco marketing is covert. International and national regulations, based on strong evidence of the causal link between tobacco marketing exposure and increased consumption, have effectively banned or restricted the advertising, promotion, and sponsorship of tobacco on traditional media. In response to these tightening regulations, the industry migrated its marketing online, where borders are amorphous and the application of national regulations unclear. To appear to comply with bans or restrictions, tobacco marketing tends to include surreptitious tactics, including: event sponsorships and product promotions; the use of celebrities and social media influencers; and “corporate social responsibility” activities.

TERM uncovers these covert tobacco marketing tactics in real time. In India, despite bans on the direct and indirect marketing of tobacco in the media, TERM has recorded an average of 850 monthly instances of tobacco marketing. In Indonesia, where there are no such bans, TERM has identified 546 instances on average each month. Activities in the name of “corporate social responsibility,” observed via TERM in both India and Indonesia, aim not only to keep tobacco brands top of mind, but also to burnish the industry’s image and snare it a seat at the policy table. In both countries, even as the link between tobacco use and severe COVID-19 outcomes was established, the tobacco industry presented itself as a beneficial public health actor by promoting livelihood initiatives and vaccines (see Figure 1 and 2).

TERM also allows users to examine hitherto understudied issues. Bidis (small, hand-rolled cigarettes) are the most widely used smoking tobacco product in India, where the bidi industry lobby has had a powerful influence on tobacco control policies. Despite the product’s popularity and influence, the bidi industry is highly fragmented and largely unregulated, employing mostly women and children to roll these products at home. The exact channels of its marketing and influence are relatively unknown. A recent report based on TERM data found that bidis are almost exclusively marketed through Facebook, capitalizing on that platform’s growing penetration among urban and rural poor people in India. Unlike other tobacco products that are promoted more covertly, bidis are openly advertised on social media, with clear, colourful pictures of the product and links to direct sales. These ads frequently feature iconic symbols, including political idols and sports stars, and even religious symbols and deities. The co-option of idols, including gods, may allow bidis and the bidi industry to appear hallowed and socially sanctioned. 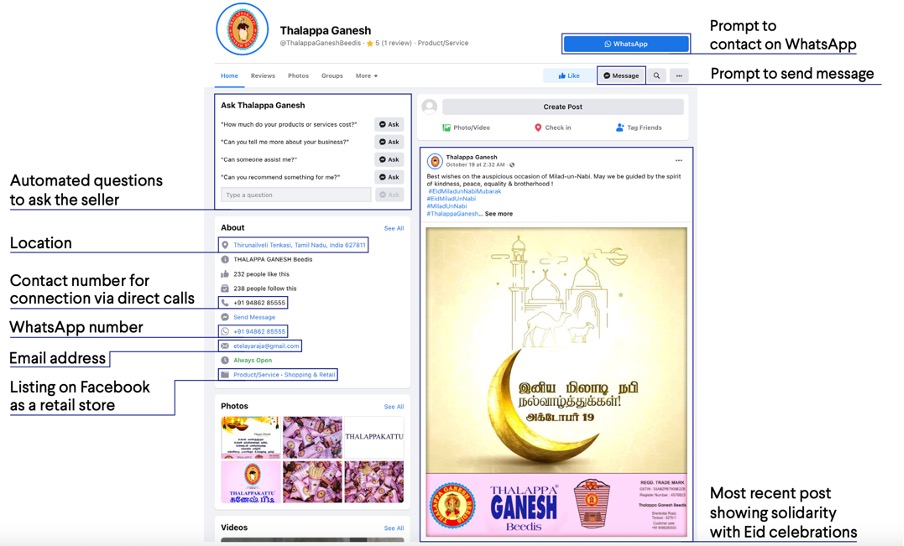 It is difficult to regulate digital marketing practices, which evolve rapidly in online environments and the cross-border nature of digital marketing creates regulatory complexity. Even though the FCTC now lists digital platforms under the forms of tobacco marketing addressed by Article 13, implementation of online tobacco marketing regulations has been inconsistent. The FCTC recognizes this and calls for rigorous monitoring by multiple stakeholders, including civil society partners, to enforce existing regulations and facilitate international cooperation.

Some governments have attempted to monitor and enforce bans on online tobacco marketing. For example, in Singapore, the government used digital surveillance to identify online tobacco sales and shut them down. Similarly, the Bahraini Public Health Directorate monitored social media to reduce the marketing of e-shisha. Civil society can support such efforts through comprehensive digital monitoring and a network of partnerships and collaborations within and across jurisdictions.

TERM offers a freely available and essential tool to those seeking to curb tobacco marketing. It provides researchers with continuous data to unearth signals of new marketing trends as they emerge, offers media the necessary information to spotlight unacceptable marketing practices, and equips governments with the evidence they need to act.