The health and economic consequences of non-communicable diseases (NCDs) are well documented. The question of how best to control and prevent NCDs is urgent in low-and-middle income countries (LMICs), where the burden is disproportionately rising compared to high income countries. Tobacco, the only common risk factor for the four main NCDs (cardiovascular diseases, cancers, chronic respiratory disease and diabetes), is a growing problem in most of these countries. In 2030 it is predicted that more than 80% of NCD deaths will occur in LMICs if no action is taken to reverse this trend.

Taxation on tobacco, alcohol, and sugar-sweetened beverages has been increasingly promoted by the World Health Organisation (WHO), the World Bank and other organisations as a part of the solution. Increased tobacco taxes are outlined in the WHO’s Framework Convention on Tobacco Control and also in the WHO’s ‘best-buy’ measures, as a mechanism to address NCDs. Taxation is widely recognised and supported as the most effective to reduce tobacco use. Reducing affordability of tobacco products through excise tax reduces consumption – thereby improving public health and increasing government revenue.

If cigarettes are more expensive, people quit, smoke less, or don’t start. Unsurprisingly, the tobacco industry opposes excise tax increases to protect their revenue and profits. One of the most common arguments they use is that increases in tax will result in illicit trade. The main issue in illicit trade is tax evasion, which includes counterfeiting, and smuggling.

Governments should be extremely cautious when lobbied by the tobacco industry about  these issues.

There is almost always a large discrepancy between rigorous, transparent academic estimates of illicit trade and the typically opaque industry estimates. The supplement highlights the example of Colombia where the average price of cigarettes is one of the lowest in the Americas. In 2016, the tobacco industry in Colombia claimed the illicit market was six times greater than estimates from independent studies.

Why does the tobacco industry inflate the size of the illicit market?

The tobacco industry has a clear incentive to discourage governments from implementing any policy that will reduce its profits by making products more expensive, especially for the young and the poor, who are the most price sensitive – and also bear the greatest burden of tobacco harm

In some countries, tobacco industry estimates on the size of illicit trade are the only ones available. Typically, these estimates are not done using transparent and/or reliable methodologies. In South Africa for example, the tobacco industry funded the research firm Ipsos to estimate the size of the illicit market. The estimates were used by the now-defunct Tobacco Institute of Southern Africa (TISA), who represented the large multi-national tobacco companies, to lobby against tobacco tax increases. When journalists and a group of independent researchers who completed their own estimates of illicit trade asked Ipsos and TISA to release their raw data and research methodology ,  both  refused.

In Vietnam and Georgia, border towns were more vulnerable to illicit trade. In Vietnam, illicit trade was heavily concentrated in the south where the two most popular brands Jet and Hero were smuggled in from Cambodia. In Georgia, municipalities where the most illicit cigarette packs were found included those closest to Russian-controlled border territories. Geography may play an important role in determining illicit trade and provides evidence to support efforts to control illicit tobacco trade in border towns.

However, not all border towns experience the same vulnerability to illicit trade. In Mongolia for example, illicit trade was lower in the border provinces. Bayan-Ölgii has active border crossings and frequent movement of people and goods. Despite the town being located on an active border, it experienced a decline in illicit trade after tax increases in 2017 and 2018. In fact, most illicit cigarette packs originated from the Republic of Korea and Ukraine, some 2,650 and 5,250 kilometres away respectively.

After Vietnam increased ad valorem excise tobacco taxes from 65% to 70% of the ex-factory price in January 2016, the proportion of illicit products consumed dropped to 14% in 2017, a significant drop from a previous estimate of 21% in 2012.

Ahead of a proposed increase in tobacco tax in Colombia in 2017, the industry overestimated the impact on illicit cigarette trade, claiming it would increase by 5% points, totalling 17% of the total market for cigarettes. In fact, a twofold increase in tobacco tax, in five cities which comprise the largest market for cigarettes in Colombia, resulted in a much smaller increase in illicit trade of 3 percentage points, comprising only 6% of the total market.

Socio-economic factors, rather than tax increases, can be more compelling in understanding patterns of illicit trade consumption. For example, in the Gambia consumers of illicit cigarettes were older, wealthier, single (divorced, widowed, or separated) and bought their products from street vendors. In South African townships, researchers found smokers most likely to purchase illicit cigarettes were poorer, had lower levels of education, and were unemployed.

South Africa’s experience of illicit trade illustrates that the underlying causes are weak cigarette supply controls. South Africa has experienced a substantial increase in illicit trade: from 5% in 2009 to around 17% in 2014. In 2015 the capability of the government’s tax collecting authority to perform its vital functions diminished as the South African Revenue Service (SARS) disbanded many of the special units that were investigating illicit trade.  In 2017, illicit trade was estimated to be between 30% and 35%, a staggering increase from the reported size of the illicit market in 2014. All this occurred against the backdrop of cigarette taxation remaining largely unchanged.

Conversely in Georgia, since 2004 tax administration reforms, reduced corruption and advanced technologies to detect smuggled products resulted in a significant drop in illicit cigarette trade. As Georgia has gradually increased its cigarette tax levels to match the European Union standard by 2024, illicit trade has remained negligible. Similarly in Bogota, Colombia, researchers found that levels of illicit cigarette were lower when compared with other cities and cited the comparative strength of relevant official institutions in the city as a possible explanation. Finally, in Brazil researchers found that after several years implementing cigarette tax increases, from 2016 to 2017 the overall consumption of illicit cigarettes in Brazil decreased.

A well-developed roadmap for addressing illicit trade exists. The WHO’s Protocol to Eliminate Illicit Trade in Tobacco Products sets out measures such as strong governance and improvements to supply chain controls (such as track and trace systems). By ratifying and implementing measures in the protocol, governments can avoid being duped by the industry, and by so doing, improve public health.

Government can and should increase excise taxes on tobacco products. This will assist in reducing tobacco use prevalence by 30% in the next five years, which is one of Sustainable Development Goals. Awareness of the socio-economic factors that shape illicit tobacco consumption will also aid governments in protecting the most vulnerable and avoid being misled by the industry’s false claims. 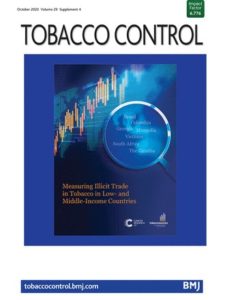 Priscilla Tiigah is the Policy and Research Advisor in Cancer Research UK’s Global programme. Erika Dayle is the Project Deputy Director and Visiting Senior Research Specialist at the Institute for Health Research and Policy, The University of Illinois at Chicago.