The tobacco industry has a history of financial investments (including lobbying) in political activity, impacting voter-based decision making on a global scale. A 2015 study from Oklahoma, USA found that legislators with the largest amounts of campaign contributions and gifts from tobacco lobbyists performed actions that were critical to advance tobacco industry objectives. More recently in 2018, we learned that a US public health chief who was appointed by the sitting U.S. President resigned after her tobacco industry investments became public knowledge. This influence is a continuation of tobacco industry strategies dating back decades. Various studies have examined the impacts of these types of investments on overall tobacco control and progressive policy adoption and implementation at the international, and U.S. state and federal levels (see here, here and here). This phenomenon has not been confined to the USA. A 2002 Canadian study showed that those elected political leaders with tobacco industry jobs in their areas were less supportive of tobacco control policies, and a 1999 study from Japan showed the political leverage of the tobacco industry in hindering public health policy over a 50 year period.

When the deadly outcomes and harms related to tobacco use became widely known, in part due to the USA Surgeon General’s 1964 report on smoking and health, the movement for tobacco control and prevention became a priority for our global public health community. Community organizations, research institutions and publications, retirement systems, pension funds and more, began formally divesting from the tobacco industry in the wake of divestment starting to gain traction and media attention in the 1980s and 1990s, despite tobacco industry opposition. However, tobacco industry documents reveal that the movement toward divestment of tobacco money in our politics and systems was so strongly opposed by the industry that the tobacco industry was successful in writing and passing laws barring it. Despite an increasingly successful global tobacco industry divestment campaign, only a handful of states and local jurisdictions in the U.S. and a few other government systems were successful in formally divesting.

Recently, as combustible tobacco use has continued to drop in the U.S. and globally, a new threat has emerged that may counteract decades of work around tobacco control, prevention and divestment. Electronic cigarette (e-cigarette) use is at an all-time high among youth. The leading e-cigarette company, including among youth, in the U.S., JUUL Labs, is already taking a page from the strategies of Altria, one of its own investors and is diversifying its investment portfolio.

JUUL Labs, the new e-cigarette giant, filed a Lobbying Firm Activity Authorization form during the third quarter of 2017. Since then, the Center for Tobacco Policy and Organizing began tracking their investments in California Politics. JUUL exclusively has invested over US$171, 000 in the 2017-2018 election cycle (Table 1).

According to the Federal Election Commission (FEC), in the October Monthly report covering September 1-30, 2019, JUUL Labs Employees Political Action Committee (JLE PAC) made investments to the New Democrat Coalition Action Fund ($5,000), Clay Jr. for Congress ($1,000) (Figure 1), and has year to date contributions to federal candidates/committee and Other Political Committees totaling $79,000 (item #23 under Disbursements). 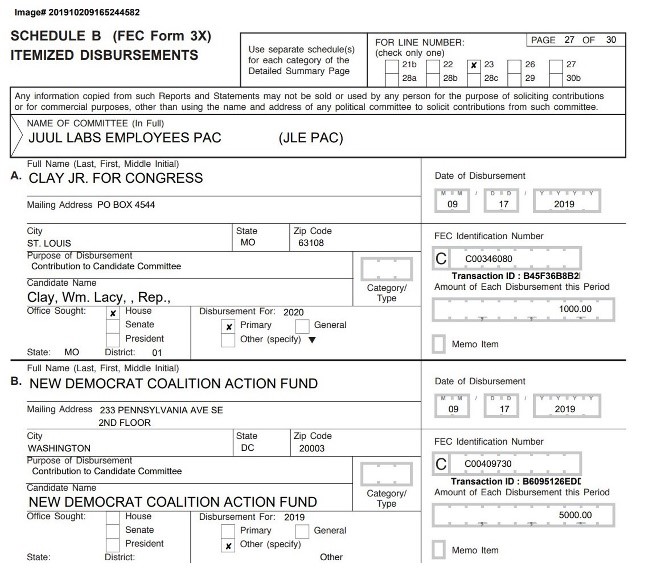 Isra Ahmad is a Research and Evaluation Specialist at the Santa Clara County Public Health Department, San Jose, California. The view expressed her are her own, and do not reflect the views of her employer.