Today marks the launch of the first-ever national mass media campaign to warn people of Cameroon about the harms of tobacco. The campaign, called ‘Cigarettes Are Eating Your Baby Alive,’ was developed by the Ministry of Health and World Lung Foundation. It graphically depicts how tobacco harms not both smokers, as well as their children and loved ones exposed to tobacco smoke. It will air on TV, radio, outdoor venues and SMS for eight weeks. The campaign is designed to empower citizens with new knowledge and spur advocacy and government to protect citizens from tobacco.

The campaign concept was rated as effective by African audiences in rigorous testing of tobacco control messaging conducted by World Lung Foundation in 2012. It was originally developed by the New York City Department of Health and Mental Hygiene and has been used effectively in Bangladesh, India, Mexico, Russia, and Vietnam, among other countries.

This mass media campaign was carried out with the technical and financial support of the Africa Tobacco Control Consortium (ATCC), Africa Tobacco Control Alliance (ATCA) and the Framework Convention Alliance. Additional funding was provided by the Bill and Melinda Gates Foundation and Bloomberg Philanthropies. 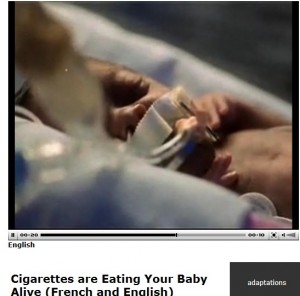